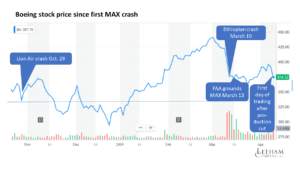 By early January, the stock price not only recovered its losses, it climbed back to $440 by Feb. 25, a record high.

Then, on March 10, another MAX crashed.

Yet the stock remained well above the closing price after the Lion Air crash.

Even after Friday’s after-market announcement that Boeing will cut MAX production by 10 airplanes a month, the stock yesterday closed at $374, well above the Lion Air low.