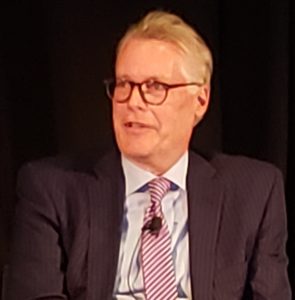 Delta, like a few other airline companies in Europe, is well known within the industry for tying MRO services for Tech Ops to aircraft orders.

Delta’s 2016 order for 75 Bombardier C Series (now the Airbus A220) required an MRO agreement with engine maker Pratt & Whitney for Tech Ops to be North America’s MRO center for the GTF engine powering the C Series.

When Delta ran a competition between the Airbus A321neo and the Boeing 7337-10, the deciding factor was PW’s continued willingness to extend the MRO agreement to the GTFs on the A321neo; CFM’s offer was not as expansive.

Bastian, at the Aviation Week conference, said Tech Ops also entered into broad agreements with Rolls-Royce to provide MRO services for the Trent family of engines. Rolls powers the Airbus A350 already in Delta’s fleet and the Airbus A330neo that will be delivered soon.

Tech Ops also has become an MRO provider for the Trent 1000 used on the Boeing 787 and which is the basis for the Trent 7000 on the A330neo. Rolls has been scrambling to service the Trent 1000 due to blade failures that resulted in months-long grounding of as many as 50 787s.

Bastian also said Tech Ops is expanding its engine testing cells, the first such expansion in the US in about 25 years.

Bastian has publicly supported launch by Boeing of the New Midmarket Airplane (NMA) and reiterated his support today. But he ducked every question for details of what Delta wants in the airplane, falling back on a general, previous statement that he doesn’t want to see it “overbuilt.” By this, he means, too much range or too much structure.

The NMA is commonly defined as a 225-270 passenger family of two airplanes with ranges of 5,000nm and 4,500nm respectively. With about 200 Boeing 757s and 767s in need of replacement over the next decade, Bastian wants to see Boeing move forward. But, he said, the company is “distracted” now with the two fatal accidents involving the 737 MAX and its subsequent grounding.