FAA: No MAX certification until 2020; analysis forecast 15 more crashes if MCAS not fixed

FAA Administrator Stephen Dickson, testifying today before the US House Transportation Committee in a hearing about the Boeing 737 MAX.

Before the hearing began at the House Transportation Committee, FAA Administrator Steve Dickson appeared on CNBC today. Among his statements: recertification of the MAX will slip to 2020, confirming what had become apparent for some time.

“Like I said there are a number of processes, milestones, that have to be completed,” Dickson said in an interview on “Squawk Box.” “If you just do the math, it’s going to extend into 2020,” he told CNBC.

At the House hearing today, Dickson said the FAA is not delegating any authority to Boeing to recertify the MAX.

He said certification flight test needs to be performed; the Joint Operations Evaluations Board needs to complete its process; and the Technical Advisory Board, which is providing an independent technical review, still has work to do. Dickson said he won’t sign off until he flies the airplane.

Matt Kiefer, a member of the TAB, says there are “action items” that must be “closed.” He said the changes to MCAS are sound.

Peter Defazio, the chairman of the House Transportation Committee, said an FAA analysis following the Lion Air accident but before the Ethiopian Airlines crash concluded there would be 15 fatal MAX accidents if there was no fix to MCAS. DeFazio asked Dickson why wasn’t airplane grounded then? He did not have an answer. 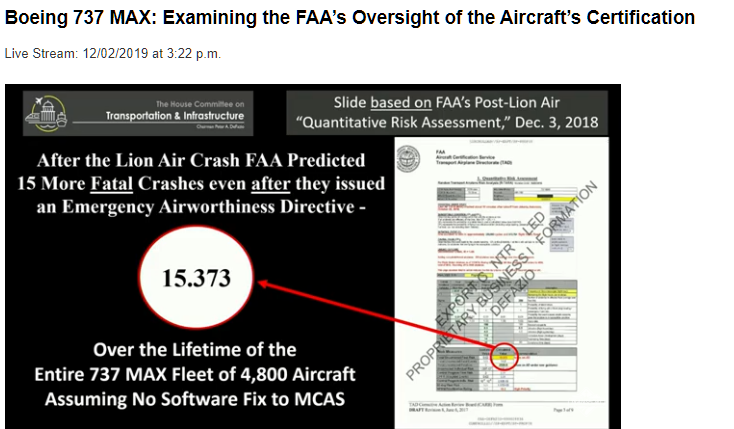 Dickson said the safety system “is not broken,” but there was inadequate communications and failures in certifying the MAX.

← First reports from Boeing’s MAX briefings last week
With no end of MAX grounding in sight, Boeing may be forced to cut or suspend production soon →

123 Comments on “FAA: No MAX certification until 2020; analysis forecast 15 more crashes if MCAS not fixed”