November 11, 2021, © Leeham News: Airbus has given more information about what led to their new freighter, the A350F, and its data. Scott Hamilton talked to Airbus Chief Commercial Officer Christian Scherer at the IATA AGM on Oct. 3-5 in Boston, and Bjorn Fehrm spoke to Head of Freighter marketing, Crawford Hamilton, about the technical details. (The two Hamiltons are not related.)

The A350F is the most capable new-build freighter Airbus has designed, posing the most serious threat to Boeing’s dominance of jet freighters since the dawn of the jet age. Some expect Boeing to respond next week with a program launch of the 777XF, but LNA understands this won’t be the case.

“The market has asked us to produce it,” said Scherer of the A350F. “So we launched the program based on our own belief of the strength of the business case.”

“The A350F beats the competing production freighter (Boeing’s 777F, our note) on payload, volume, and economics,” says Crawford Hamilton. “We have taken extra care to make the door larger and the floor extra sturdy to ease loading planning and execution. The A350F will be the freight forwarder’s preferred machine.”

The background to the A350F

Airbus launched the A350F without firm launch customers, an unusual move. “We have launched this program on the basis of our own belief of the strength of the business case,” Scherer said in an interview with LNA during the IATA AGM Oct. 3-5 in Boston. “The market has asked us to produce it. The market dynamic that has given birth to this program is one, the very fact, and I think that’s the most important one, that it is some of our customers who came to us and said, this looks like a really good idea. This wasn’t a bunch of guys somewhere in an office in Toulouse saying, ‘Oh, let’s do a freighter.’ This was a market-generated demand stimulated by the fact that I think the market felt it needed competition.”

Getting it right this time

Scherer said that the A350 with its structure, in particular the A350-1000 version, “which is the world’s longest-range airplane, has a structural capability that previous Airbus airplanes did not have to receive the density of heavy cargo and not just packaged freight.”

Airbus’ previous freighters fell short on structure. “The A300 is a very good package freighter. It’s not a heavy-duty freighter,” Scherer said. “The mistake Airbus made [with the A330-200F] was to say, ‘Look, we don’t have an airplane that is really capable of that having density, but we want that range.’ We developed the 330 freighter on the basis of the -200, and that was the mistake. We should have done it on the -300, because the 200, even though it’s got a little better structural capability than the -300 still doesn’t have the structural capability for the heavy freight. We should’ve gone for volumetric payload, as opposed to trying to compromise between structural payload and volume. We’re not making that same mistake [with the A350] because we’re starting with the bigger module.”

Yet, making the A350 a freighter was nevertheless an afterthought when designing the airplane.

The 787 doesn’t lend itself well to a freighter. Boeing has a challenge with doing a cargo door in a barrel composite airplane. Airbus chose the panel approach for the A350. Was Airbus thinking about a cargo version of the airplane, or did it just happen to work out that way?

“It’s tempting to say it was all part of a grand plan,” Scherer said candidly.

The A350F, larger and more capable

The A350F is based on the A350-1000 in its highest Maximum TakeOff Weight (MTOW) variant, the 319t model. The A350-1000 is shortened with five frames ahead of the wing, so the center of gravity is kept in an optimal place for the freighter (Figure 2). 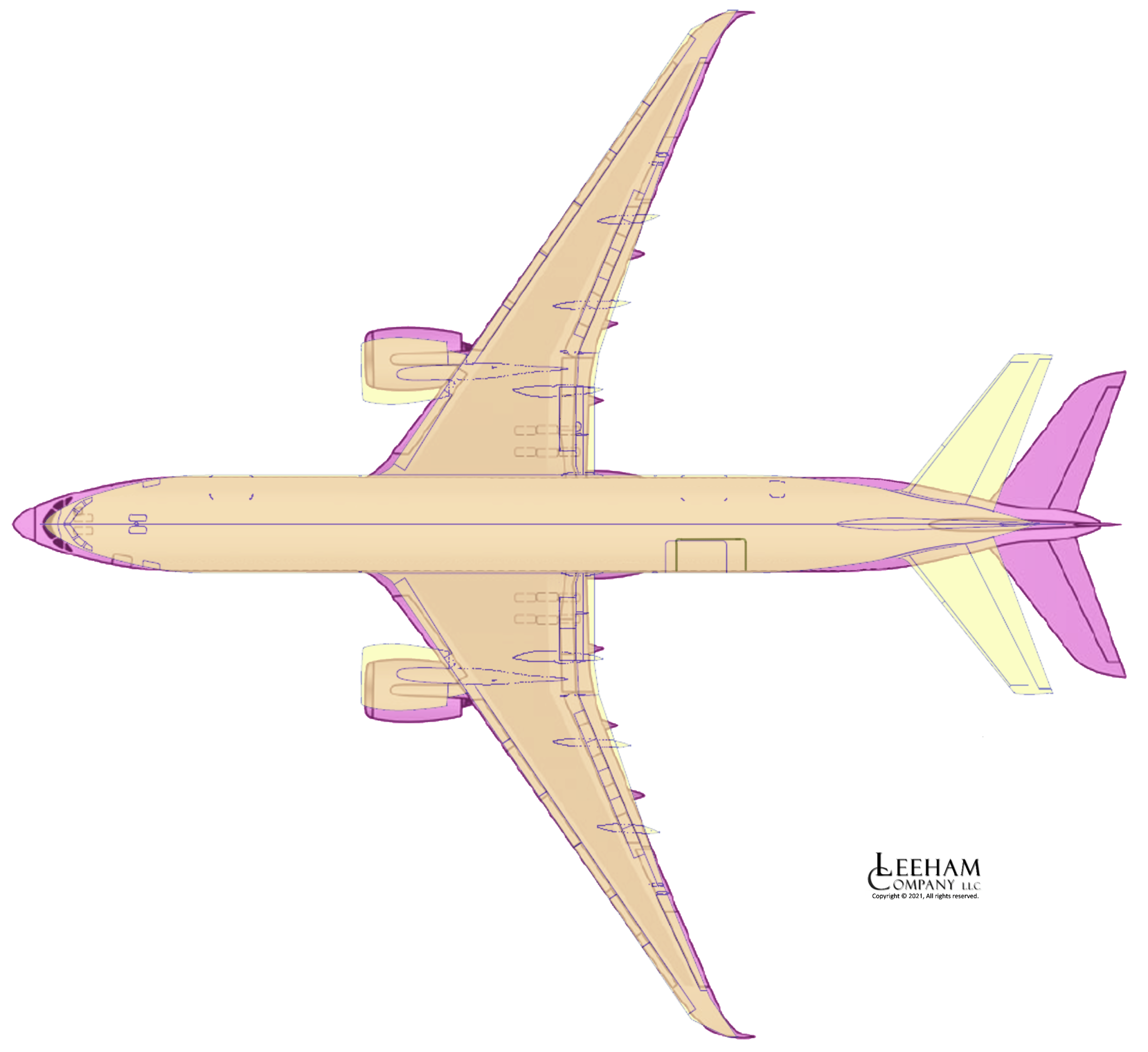 The A350-1000 is reinforced to take this higher payload (the max payload for a standard A350-1000 is 63t). The reinforcements are in the main deck aluminum floor beams which are made extra strong so that the loadmaster doesn’t have to place heavy pallets at specific positions in the aircraft.

The extra-large maindeck cargo door is placed behind the wing so that the loading of cargo can’t make the aircraft sit on its tail (pallets are moved to the front before the rear is filled up).

A big portion of the 46t increase in payload over the A350-1000 comes from a lighter aircraft. When the passenger cabin is removed, and the aircraft is shortened, a whopping 30t is removed from the empty weight of the A350-1000. This makes the A350F 20t lighter than the 777F.

Airbus claims this difference in empty weight and the more modern engines (Rolls-Royce Trent XWB 97k) give the A350F a clear advantage in operating cost. We will do our checks of the economics of the competitors using our airliner performance model in a coming article.

Airbus targets late 2025 for entry-into-service. If it meets this target, or even if it slips into 2026, EIS could be years ahead of the still-to-be-launched Boeing next generation freighter, the 777XF.

EIS for the 777-9 has slipped nearly four years. The target is now late 2023. Technical issues with the giant GE9X engines caused an initial delay of about nine months. Then, the MAX grounding and certification issues caused a knock-on effect to the 777X certification. The COVID pandemic wiped out international passenger demand for which the 777X was designed. The best estimates for demand recovery are 2023, though most see full recovery not occurring until 2024 or even 2025.

The strong freighter market and the upcoming ICAO recommendations about engine emissions have moved the plans for a 777X freighter ahead of the 777-8. Boeing recognizes that with the ICAO standards looming, it must go forward with a new freighter. CEO David Calhoun, on the Oct. 26 3Q earnings call and in previous events, said Boeing is likely to launch the XF program.

He gave no timeline, but Bloomberg News suggests a program launch could come at the Dubai Air Show Nov. 14-18. This timeline seems aggressive. Market intelligence suggests Boeing won’t have an XF EIS ready until 2029, more than a year after the production of the 777LRF and 767F must end—and up to four years after the targeted EIS for the A350F. LNA is told the 777XF program launch is unlikely before 2022.