EADS reveals its analysis of tanker fuel use; says KC-45 is more efficient than KC-767

EADS and before it went solo, Northrop Grumman, has largely ignored the Boeing studies other than to generally dismiss the veracity of them. In doing so, both said the USAF would run its own analysis and determine the KC-45 delivered more bang for the buck, which is what happened in the 2008 competition won by Northrop. The KC-45 achieved an IFARA (efficiency) score of 1.9 vs. 1.71 for the KC-767.

But EADS and Northrop missed the point of the Boeing studies, and that was to influence Congress, not the Air Force. EADS finally got it, and released the following data.

EADS’ internal study, based on requirements and criteria in the USAF Request for Proposals, says the KC-45 will use 3% less fuel per gallon of fuel delivered on refueling missions than the KC-767 on 500nm trips and 31% less on 2,500nm trips. Thus, using USAF criteria, EADS says on a 2,500nm mission with 250 sorties, the KC-45 will save about $25.8m in one day alone, based on assumed fuel-per-gallon pricing disclosed by the Department of Defense.

Using USAF Net Present Value criteria in the RFP; 500nm increments for missions, and other factors, EADS ran several different scenarios with variable factors based on RFP criteria and concluded that mission-driven factors—and not solely training scenarios on which Boeing studies are essentially based—means the KC-45 $1.37bn to $16.5bn on an NPV basis over the 40 year life cycle.

This compares with Boeing’s AeroStrategy study that concludes the KC-767 saves taxpayers $11bn-$36bn over the same period, but not on an NPV basis.

EADS uses USAF criteria and the cost to deliver a gallon a fuel as the basis for its study compared with the Boeing approach, using commercial airline fuel consumption data filed with the US government.

The distinction compared with Boeing’s methodology is important, as we will explain.

EADS is up front is admitting that if the tankers were flown only for training purposes or ferry flights, which it characterizes as “Point A to Point B” flying, the KC-767 has the advantage. EADS’ own numbers show this type of flying means the KC-45 will cost $175m to $755m more to fly (on an NPV basis) over 40 years than the KC-767.

But after factoring in actual tanker missions, based on the RFP criteria using 45% of the flying as training and 55% as missions, on a 1,000nm range, the net savings proffered by the KC-45 is $3.6bn over 40 years.

In an interview, EADS made available John Butcher, director of Business Development for Air Force Programs. He has been with EADS North America for 1 ½ years, having retired from the USAF as a tanker pilot and in capabilities-based planning. Also made available: Tom White, Director of the consultant firm Chase Analytical Services (CAS Inc.) White is also retired from the USAF in air mobility and in decisions support. He has consulted to the Air Mobility Command for former Defense Secretary Donald Rumsfeld.

Butcher, the career tanker pilot, says that in practice, only about 25% of the tanker flying he did was for training. Using this figure, and the 1,000nm mission range, the NPV savings over 40 years for the KC-45 is $5.3bn after overcoming a $273.7m deficit for the training and ferry-flight flying.

The likelihood that the USAF will eventually transition to more simulator flying with either the KC-767 or KC-45 probably means actual airplane-training will go down, perhaps dramatically. One scenario run by EADS, based on only 10% training flights and a 2,000nm range reveals the KC-767 still out-performs the KC-45 for these training flights, using $168m less in fuel over 40 years on an NPV basis. But when the missions are factored in, the KC-45 saves $16.7bn in fuel, for a net savings of $16.5bn NPV over 40 years. 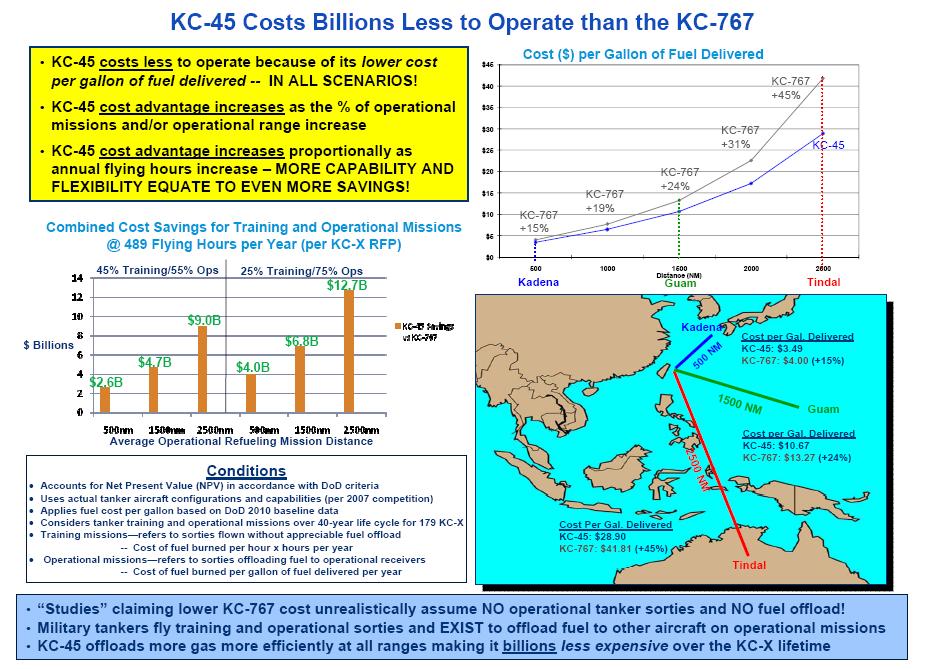 How is this different from the two Boeing studies?

Boeing in the 2008 tanker competition commissioned a study from an obscure company, Conklin de Decker, to conclude that the KC-767 will use $24bn less in fuel over the 40 year life cycle of the KC-X tanker than the KC-45, which is based on the larger Airbus A330-200. Conklin is better known for its work in corporate aviation than commercial aviation. Conklin essentially took data from the US Department of Transportation filed by US airlines on fuel usage for the A330-200 and the 767-200ER (on which the KC-767 is based) and extrapolated the difference and conclusions.

Earlier this month, Boeing released a second study it commissioned, this one by the consulting firm AeroStrategy. Unlike Conklin de Decker, AeroStrategy is a widely known firm that instantly lends a level a credibility to the report that Conklin lacked. AeroStrategy analyzed 10 scenarios to conclude that the KC-767 would save the USAF $11bn-$36bn over the 40-year life cycle assumed in the RFP.

EADS immediately criticized the report as comparing commercial apples to military oranges. In a short, EADS internal study is direct about what it sees to be flaws in the AeroStrategy and Conklin studies.

“Both studies are simple analyses of the fuel burn rates of the two commercial aircraft and neither assigns, or measures, any value for the fuel burned; the aircraft are simply being flown from Point A to Point B without consideration of passengers transported or cargo delivered,” EADS says.

“For example: Assume there are two competing tanker aircraft; one called Aircraft A, and one called Aircraft B. Aircraft A burns 20% less fuel than Aircraft B when they each fly 1500 miles out and back. But Aircraft A can deliver only 70% of the total amount of fuel to a specific point 1500 miles away, when compared with Aircraft B. When you have a firm military requirement to deliver one million pounds of fuel 1500 nautical miles away, you simply cannot afford to ignore the mission outcome: delivery of fuel at range. In effect, measuring fuel burn costs without consideration of fuel delivered at range is a meaningless or worse, misleading, evaluation metric for this competition.”

“A lot has been said about the operating costs for respective offerings,” Butcher says. “Ultimately the job is with the USAF to make determinations of their intimate knowledge of operations and the business of the future. We are looking at the issue of cost efficiency through the lens of the USAF. It is easy to look at it through the lens of commercial aviation or skewed operations. We are using USAF algorithms for the most efficient use of the information rather than a specific outcome.”

“Most [of the arguments out there] have been centered on how much fuel is burned for one airplane vs. the other,” White said. “We went back and looked at how the USAF looks at this, vs commercial data and flying airplane from Point A to Point B. They are commercial airliners, not tankers, with no mission effect, just point A to point B, and no mission analysis.

“We went to RFP and used the measure the air force looks at for efficiency,” White said.

“Boeing assumes all the complexity away. It assumes a certain number of hours per year and that their aircraft will beat ours. All they do is come up with average hourly fuel rate and come up with a number. The truth is, the Air Force will use the tanker for a variety of missions and some may be straight hourly/cost mission, such as training missions, and for this, a smaller/lighter aircraft will be more efficient,” White acknowledged.

But EADS says the RFP will analyze theatre of operations from 500nm to 2,500nm in 500nm increments. The Air Force calculates a fuel offload at range vs. fuel consumed for an efficiency factor.

“When you do that, the farther away, the more efficient we get” Butcher said.

In the Pacific theatre, this is important because one of the presumed foes—China—is developing anti-access strategies to deny access to US aircraft carriers and even forward-area bases, such as Guam. Such would require refueling tankers to transit from much farther away.

In the Afghan theatre, this is important because direct flights from air bases are often restricted due to air space denials by unfriendly governments. EADS argues the larger fuel capacity of the KC-45 means fewer airplanes are needed than would be the case with the KC-767 to refuel airplanes at or near the front.

“We used the numbers the Air Force gave in RFP because that’s what Air Force said we have to meet,” Butcher said about the EADS charts and analysis.

“The RFP is what it is,” said Jamie Darcy, the tanker spokesman for EADS. “We’re not putting out these numbers to influence USAF; the reason Boeing is is clearly laying the groundwork to question the Air Force’s decision-making and question their decision making authority. That is a strategy designed to set an environment, in case [the Air Force] chooses the KC-45, Boeing will question the judgment of the Air Force.”

40 Comments on “EADS reveals its analysis of tanker fuel use; says KC-45 is more efficient than KC-767”