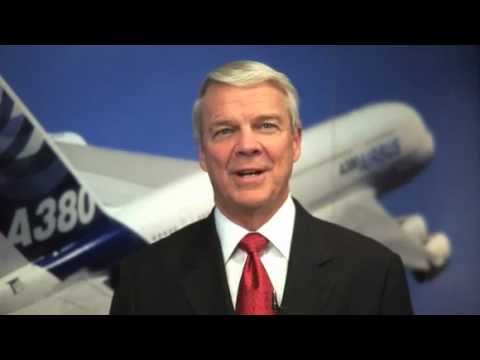 Allan McArtor believes there will always be a market for the Very Large Aircraft (VLA), but he’s not surprised Boeing cut the production rate of the 747-8.

McArtor, who as chairman of Airbus Americas, is hardly an unbiased observer. He says the 747-8 Intercontinental is uneconomic and the market for the 747-8F is weak. But he also acknowledged that the dearth of sales for the Airbus A380 has been a challenge.

Airbus has forecast 1,200-1,300 VLA-Passenger deliveries over a 20 year period every year since 2000, while Boeing has steadily reduced its forecast to just 540 VLAPs in its current forecast. Airbus believes it will capture 50% of the market, based on its forecast. In fact, it currently is capturing between 86%-90% of the sales.

Each forecasts several hundred more VLA-Freighter deliveries during the next 20 years. Boeing currently holds a monopoly in the VLAF sector, but sales haven’t been on a pace to meet either company’s forecast, nor have sales of the A380 remotely maintained a pace that suggests Airbus will meet its own forecast, without dramatically adjusting both the total market and its market share expectations.

In an interview with Leeham News, McArtor maintained there will “always” be a demand for the VLA. He acknowledged that one can quibble with the forecast or the timing, but airport constraints and growing markets between key cities, such as London-Tokyo, London-New York, Paris-Tokyo or New York and similar segments, will demand a VLAP.

Airbus so far this year has has a net order for the A380 of minus three, but it signed a Memorandum of Understanding for 20 from specialty lessor Doric during the Paris Air Show. This is expected to be firmed up before the end of the year, potentially at the Dubai Air Show.

Boeing is also expected to make a splash at Dubai with the highly anticipated public launch of the 777X, with a large order from Emirates Airlines. The airplane, with a new composite wing, new engines, systems upgrades and cabin modifications, will come in a 350-seat 777-8 and a 407-seat 777-9. The 777-8 directly competes with the Airbus A350-1000. The 777-9 doesn’t have an Airbus competitor and at nominally 407 seats falls just within the VLA sector, which begins at 400 seats.

At the ISTAT conference in Barcelona this month, Airbus’ John Leahy, COO-Customers, said the company is studying a possible stretch of the A350-1000 that would presumably be a competitor to the 777-9, but then he backtracked a bit, telling reporters “there is no story here.”

McArtor provided a little clarity in our interview.

Many, including this column, believe the 777-9 will kill off the somewhat larger 747-8I and adversely impact the A380. McArtor somewhat sidestepped this question, saying, “The A350-1000 would impact the A380 if any would.”

As for the prospect of a Boeing 757 replacement that would also mean replacing the Boeing 737-900ER/9 MAX and A321ceo/neo, McArtor doesn’t think a similarly sized replacement may make sense. Continued up-gauging trends may suggest the 757 replacement might well be a larger aircraft that falls to the A330-200 250-seater, he says.

“I think we can make incremental improvements to the A330 and probably keep the program going: a new engine, winglets, avionics,” McArtor said. “Personally I don’t think Boeing is ready to commit to a 757 replacement. I think they’d use the lower-end 787.”