MAS MH370, Day 3: The dominant news last week and over the weekend was, of course, the mysterious disappearance of Malaysian Airlines flight MH370, a Boeing 777-200ER. It didn’t just crash (which is the assumption): it vanished, with no trace at all.

There was a tantalizing clue that maybe it turned back toward Malaysia, its origination, based on radar returns. But if it were near the Vietnam coast, why turn back when there probably would have been a closer airport in the event of an emergency?

As we wrote over the weekend, the absence of debris along intended flight path suggests the airplane deviated–but this is speculation, albeit perhaps supported by the radar indication of a turn.

Some of our Readers, and observers on television, noted that a few days passed in the case of Air France 447 before debris was spotted. AF447 was the Airbus A330 that disappeared between Rio de Janeiro and Paris in 2009 in the South Atlantic. There are similarities but there are differences, too. AF447 went down well out into the open Atlantic in waters about 15,000 feet deep. MH370 disappeared in a much smaller, confined area where the depths are much shallower: up to 300 feet deep. The entire Gulf is 320,000 square km, no small area to search but certainly far smaller than the South Atlantic where AF447 went down.

The Wall Street Journal created this graphic that is quite illustrative about the situation. What we haven’t seen anywhere is the location for the “turn” reported by radar. 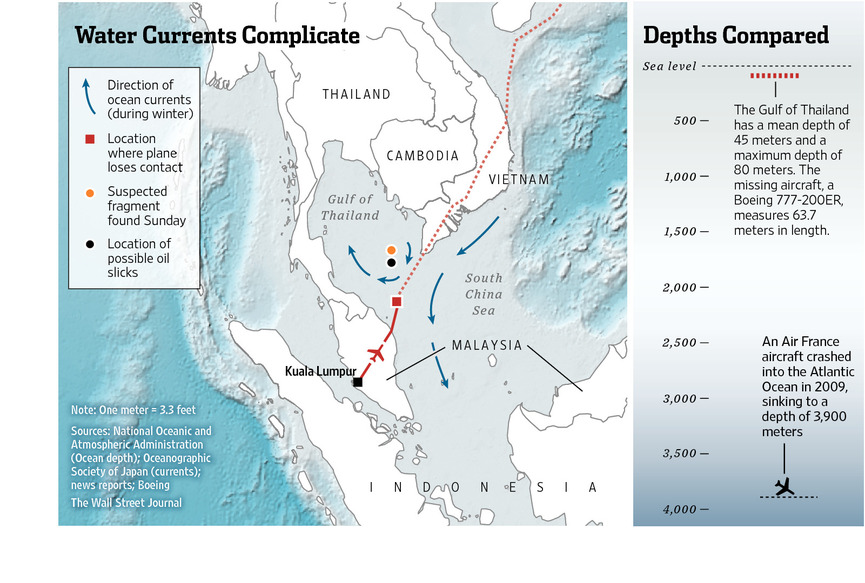 Mary Kirby and Steve Trimble have opinion pieces about the need for a real-time streaming of information. Kirby’s piece is here and Trimble’s is here. Each have a good argument. One thing they don’t talk about is whether there are international standards that would permit this. We did a story for Kirby when she was editor of APEX magazine about the international standards issue with respect to Wi-Fi on airplanes. That story is here.

Although the details between Wi-Fi and real-time aircraft data streaming are different, we wonder if the over-arching challenge Boeing faced with Wi-Fi is the same or similar for real-time data streaming.

Qatar on A380: Akbar Al-Baker, CEO of Qatar Airways, is known for his hyperbole and about-faces, but every once in a while he expresses an opinion that has some useful information. His comments about the Airbus A380 is one of these occasions. Take note of the operating costs vs fuel prices and the reference to re-engining the airplane.

A330neo momentum: There continues to be increasing interest among airlines about the prospect of an Airbus A330neo, our Market Intelligence tells us.

New Small Airplane: Here is a 13 page PDF paper written in 2012 and presented to the AIAA discussing the prospects of a twin-aisle operation on 757/737/A320 routes.