In our first two parts of the analysis of the Airbus A330neo launch at the Farnborough Air Show, we have gone through the information provided by Airbus and Rolls Royce and provided comments on what these really mean from a practical point of view.

Areas we wanted to verify with our independent model have been how the A330neo would perform versus the A330ceo, especially on shorter ranges, than the Airbus example of 4,000nm and how it would stack up against the Boeing 787.

We give the first answer to these questions with data from our proprietary, independent model. This is first-cut data and we bring it forward in time as there is some confusion on what Airbus has said about the shorter range performance of the A330neo.

The performance information provided by Airbus has been dissected and we have done a first independent modeling to verify the validity of Airbus launch presentation claims (given below) but also to clarify the muddled picture of what happens when the range flown gets shorter than the 4000nm example given by Airbus at the FAS. This is important since many sectors flown for a long haul airliner are still 1,000nm to 2000nm intra-Asia and some within Europe. The 4,000nm Airbus is using as reference is a mission which is equivalent to a Trans-Atlantic or a Europe – Asia flight (London to Delhi for example), with typical flight times of 8-9 hours. 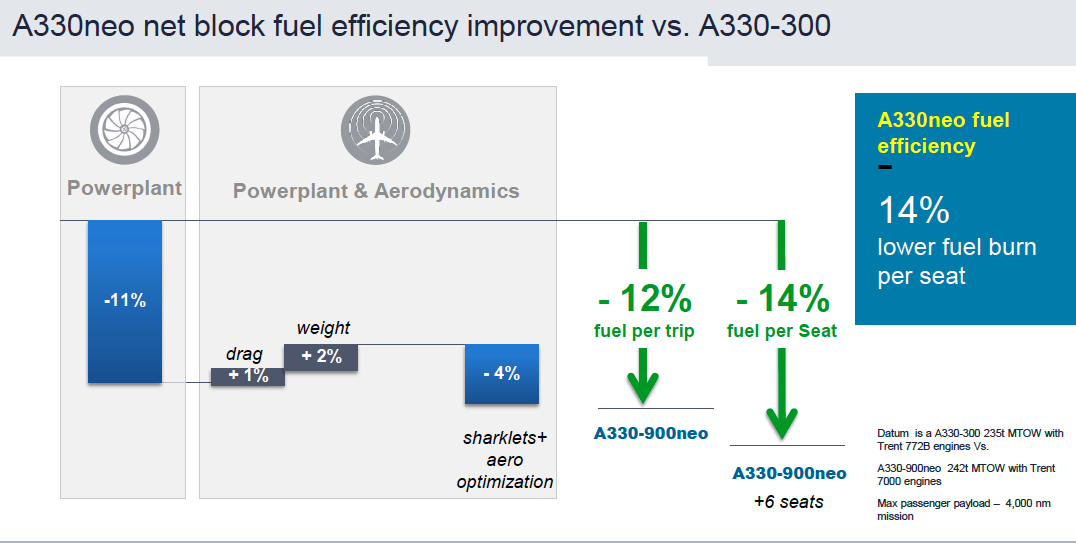 We have modeled the main changes as presented for the final A330neo, comprising changes for engines, nacelles/pylons and A350-style winglets in addition to the weight changes. We have not had time to dissect and model the aerodynamic improvements Airbus will do to the inner wing. Further we have also not modeled the “Powerplant 11%” in full as the Trent 7000 gives 10% TSFC improvement and we do not understand where Airbus finds the last 1%.

Importantly, we wanted to understand the decline in efficiency improvement when the flown range gets shorter; 4,000nm is about 2,000nm above today’s average stage length for the in service A330 fleet, which is the stage length example used by Airbus since about 2010 to compare the A330-200/300 with the 787-8/9. We don’t think that the A330neo’s average stage length will be 2,000nm, but it will definitely be below 4,000nm. Therefore the performance at shorter flights is important to understand.

With the caution that this is a first run of our model on incomplete data, we can say the following:

In Thursday’s Farnborough wrap-up press conference, Airbus clarified the role and configuration of the A330R or regional. This model is in the price-list and is subject to ongoing sales campaigns, mainly for intra-China routes. Airbus also clarified that this de-papered and de-rated aircraft is a ceo model. It will not be raised to a neo specification, as this makes no sense. When calculating the total operational costs for the regional, the ceo is the better choice as it has a lower price (the engines are cheaper, as is the airframe), a lower weight and engines which consume 10% more fuel but fuel is a less important factor in the total cost equation for dedicated short-haul. For the discussion above we talk about the average stage length being shorter than 4,000nm, not all flights being shorter.

It is clear the A330neo forms a competitive proposition versus the 787 and that the competition between the two variants in the 250-300 seat segment will be fierce going forward. We have gained more understanding of the cabin modifications that Airbus has included in the A330neo, and this together with our knowledge from our normalized cabin work for our A330neo study makes it possible to position which models are competing in the market place:

Why the difference in what we see and what Airbus claims (they claim equal fuel consumption performance)? We don’t know how it configure the 787. We, for instance, use identical -10% TSFC Trent 1000TEN engines on the 787 with identically configured cabins, crew rests etc.

As more information becomes available, we will further refine our model and re-analyze the economics of the airplanes. The results will be incorporated into an updated version of our A330neo Business Case Study, which is only a for-purchase item. These additional results will not be posted in this column.