When we did our analysis of the A330neo after the Farnborough launch we limited our checks to trip fuel efficiency as we did not have enough clarity of the cabin improvements that Airbus announced. After a meeting in Toulouse last week with Airbus cabin experts we know have the missing information.

Airbus gives the A330 cabin an interesting update for the A330neo. It comprises A330 ideas (improved crew rests), A350 ideas (improved lighting and IFE) and finally ideas tried out on the A320 (SpaceFlex and SmartLav lavatories). Combined they give the A330neo cabin a better passenger experience and improved utilization of cabin space.

We will now go through these improvements one by one to review the technology behind them and show how they affect the A330neo efficiency. Base for these comparisons are the A330 and A330neo cabin layouts we got from Airbus: 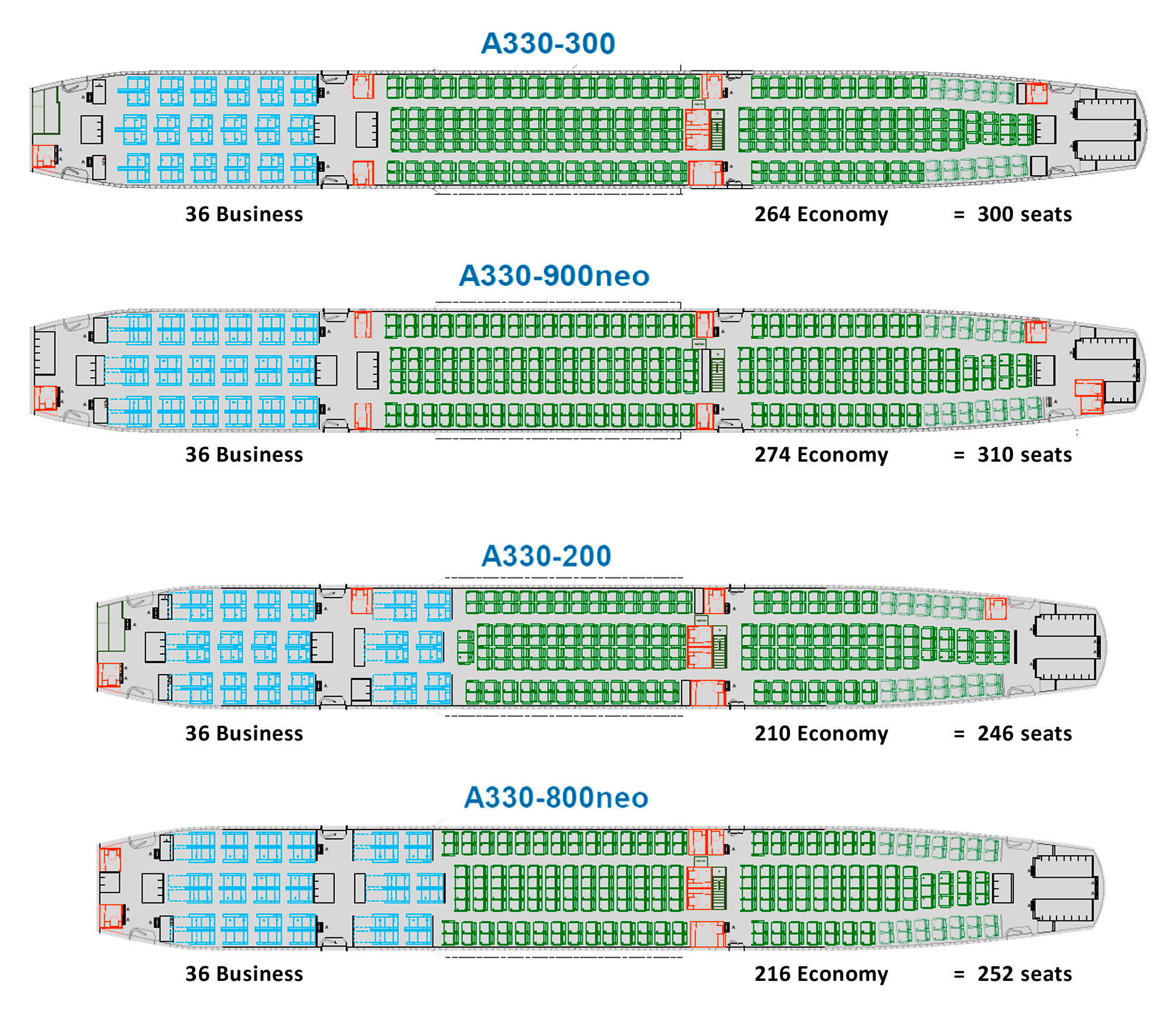 Airbus A330 and A330neo cabin layouts

Airbus introduces the LED mood lighting from the A350 but does not bring over other things like overhead bins etc. The mood lighting together with improved IFE options will improve passenger experience but it is already available as BFE (Buyer Furnished Equipment) on the A330ceo (e.g. Virgin Atlantic A330ceo’s have similar mood lighting): 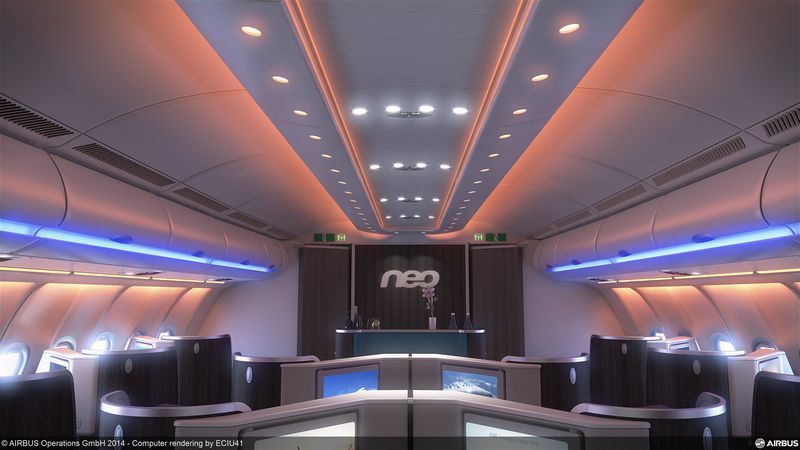 The A330 cross-section does not have enough crown volume (top of fuselage space) to allow the cockpit and cabin crew rest modules to be placed above the main cabin area like for the A350, Boeing 787 or 777. Therefore Airbus has been confined to use cabin area crew rests or cargo bay modules accessed via staircases from the cabin. Older generation A330-300 have not had a strong requirement for crew rests as their practical endurance has been 8 hours (the limit in most Airworthiness jurisdictions for mandatory rest for crew members). When the A330-200 was introduced in 1998 it complemented the A330 for longer range missions which could span up to 12-13 hours. It thereby inherited the most popular crew rest solutions that were developed for the long-range A340. These consisted of a 2 bed closet for the pilots directly behind the cockpit door, there replacing the standard forward galley and a 3rd door placed staircase to a Lower Deck Movable Crew Rest (LDMCR). This crew rest is housed in an aft cargo hold LD36 container which holds 6 beds for cabin crew.

For the A330neo Airbus will develop an 8 bed lower deck crew rest for both flight and cabin crew, thereby removing the need to take cabin area for crew resting purposes. This frees the area behind the cockpit for galley use which in turn frees up an area equivalent to 4 economy seats in the cabin.

Airbus has developed the SpaceFlex lavatory/galley concept and the SmartLav lavatory for the A320. These are now added to the A330neo cabin options to enable increased cabin efficiency also for long-haul. The SpaceFlex lavatory allows the combination of two normal lavatories to be combined into one PRM lavatory (PRM=Persons with Reduced Mobility). The PRM lavatory allows a wheelchair bound person to use the lav after cabin crew have folded away the separation wall to create one big lavatory.

The person then use the one lav as the parking area for the wheelchair while sliding over to use the other lavatory. This dual lavatory module is more efficient then the PRM and normal lavatory it replaces, freeing up space equivalent to a little more than 2 seats.

Further space is found by introducing the narrower type lavatory which Boeing is introducing on the new Delta 737-900, there called “Modular lavatory”. Airbus variant is called SmartLav and is in development for the A320. They both redistribute space for plumbing/pumps from the lav’s sink side to a “dog-house” bulge in the non-occupied feet area of the last seat-row before the lav. They thereby can narrow down the system area on the sink side of the lavatory, this is combined with a narrow sink which is pushed further into the lavatories gangway. 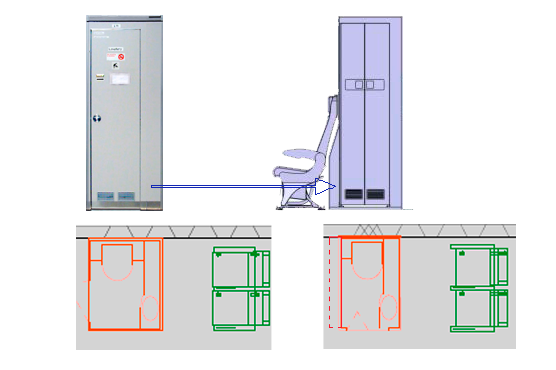 Comparison of normal lavatory and SmartLav.

The overall effect is a lav that occupies 15% less cabin length compared to today’s standard of 36 inch/0.92m. This gains the cabin 1/3 of a seat per lavatory so several lavatories have to be combined to gain a seat, but in the cabin of today every inch counts.

Does these gains exist in practice?

The Airbus cabin drawings are done so that gains realized by the changes could be combined to a total of 10 seats in the case of the A330-900 vs A330-300 and 6 seats for the A330-800 vs. A330-200. Would one also see these gains in an operator designed cabin? The gains from the changed crew rests are real, they free the space equivalent to 4 economy seats. The SpaceFlex lavatory is a nice solution to the problem of providing a PRM capable lavatory in the cabin, the effect is a gain of slightly more than 2 seats. Thereby Airbus has gained the 6 seat they need for their claimed increase of per seat fuel efficiency of A330-900 vs. A330-300 of 2%.

Airbus has also said that the total potential for a A330-900 would be an increase to 10 seat if SmartLav technology is added to the mix. This is more questionable as each SmartLav only gains 1/3 of a seat. In the example Airbus uses 4 SmarLavs (the rearmost lav is shorter and therefore stays the normal width) for a total gain of 1 and 1/3 seat. Together with the space left over from the SpaceFlex one might see a total of 2 further seats, should narrower lavs be acceptable for a long haul aircraft. We think it might be for the economy class but not for the 2nd and 3rd lavatory for the business class as in the Airbus example. The gains would then reduce to around 1 seat in addition to the 6 we gained before.

The 2% gain in per seat efficiency for the A330neo is plausible as this is gained before the question of narrower lavs comes into play. It will be up to each operator to decide if they want to introduce the SmartLav into long-haul, we doubt it will be allowed into the premium areas of the cabin. One could thereby say that Airbus claims for the A330neo would be substantiated, given that the 12% trip gain is correct. Our analysis with our proprietary model shows that the gains are plausible but only under the conditions given at launch, Airbus slides state “Datum is a A330-300 235t MTOW with Trent 772B engines Vs,” i.e. the variant flying today. The gain over the A330 242t ceo variant due in 2015 thereby stays at around 10% trip and 12% per seat on the given 4000nm mission.

Airbus still provide cabins for comparisons with a fixed business class of 36 seats both for the 250 seat and 300 seat segments, this makes their results non-comparable between the models. How this all stack up with more realistic average mission lengths, fully normalized cabins and how the final A330neo compares to Boeing’s 787 we will describe in our updated A330neo report, we now have all the details for this update.