Malmo and CSeries: Malmo Airlines, a small carrier in Sweden that is a subsidiary of Braathens, last week said it withdrew as the launch operator of the Bombardier CSeries. Malmo has five CS100s and five CS300s on order.

First delivery was scheduled for the second half of next year. The oil line failure in a Pratt & Whitney GTF engine on May 29 has set the flight testing back, although BBD hasn’t said by how much. We believe it will likely be a day-for-day setback and it’s possible that EIS will actually slip to 1Q2016.

The flight test fleet is expected to return to the air this month.

According to the Ascend data base, Lufthansa Group’s Swiss Airlines subsidiary was to be the second operator, also in 2015. We don’t expect Swiss to change its planned delivery schedule.

Although Malmo’s withdrawal as launch operator is awkward for Bombardier’s image at this sensitive time, we’re not so sure it’s a bad thing. Malmo only has a dozen airplanes and becoming the launch operator of a brand new airplane and a brand new engine probably was pretty cheeky in any event, even with the support of its larger parent. Better for Malmo to withdraw now than for the CSeries to have a challenging entry-into-service with a small carrier that may or may not be up to the task of being the lead operator for an entirely new airframe/engine combination.

Furthermore, according to Ascend, BBD’s skyline in 2016 calls for delivering 70 CSeries with 28 more options and LOIs that could be converted to firm orders, including three options from Malmo. Counting the four Malmo airplanes scheduled for delivery in 2015, we believe BBD is committed to deliveries for which its production ramp up is over-extended. 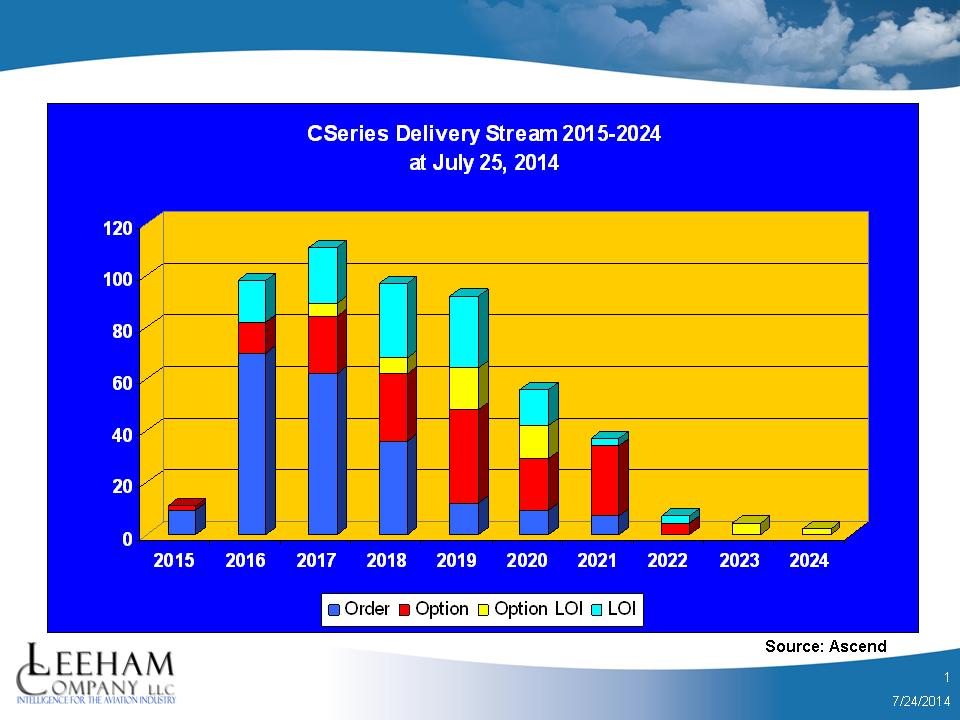 We expect Bombardier to provide an EIS update once it has several of its Flight Test Vehicles back in the air. FTV 1 is still undergoing repairs from the engine incident. FTVs 2-4 are ready to return to the air when PW re-delivers the engines with the fixes. FTVs 5-7 are in assembly.

Boeing’s Terrible Teens: That’s what the 787s that were built in line numbers 10-19 and #22, the Terrible Teens. These required so much rework that airlines refused to accept these over-weight, under-performing patch-worked airplanes. They continue to sit at Boeing’s Everett facility at Paine Field, four years or so after they were built.

The Wall Street Journal reported Friday the struggle Boeing has in trying to sell these airplanes. The article is here, any may require a subscription. You can find synopses on Google News if you can’t access the full article.

Guy Norris of Aviation Week retweeted Jon Ostrower’s Tweet about the Terrible Teens. Someone replied to Norris’ Tweet: “I’ve got a couple terrible teens at home I’m willing to offload cheaply too…

← Focus on Bombardier after more executive changes
Airlines, not passengers, at fault for recline wars →