Delta Air Lines is supposed to make a decision on its Request for Proposals for 50 wide-body aircraft before the end of this year, perhaps as early as next month. The competition is hot between the Airbus A330-900, the A350-900 and the Boeing 787-9.

Delta is understood to use the aircraft to beef up its growing Seattle hub across the Pacific; for its Detroit hub, also to Asia; and its New York JFK trans-Atlantic hub.

In addition, Delta is phasing out the last 14 of its Boeing 747-400s inherited from its merger with Northwest Airlines by the end of next year.

The A330-900 is viewed as a trans-Atlantic airplane, while the others are viewed as largely, but not necessarily solely, trans-Pacific aircraft, according to our information.

But there could be another wrinkle. On Delta’s third quarter earnings call, CEO Richard Anderson made some intriguing comments that could raise another possibility: acquisition of used Boeing 777-200ERs.

To put this in context, recall that Anderson and Delta actively seek out inexpensive used aircraft which, while hardly competitive at high fuel prices when comparing operating costs vs new aircraft, provide low capital acquisition costs and low ownership costs.

Here’s the exchange on the earnings call, as recorded by Seeking Alpha’s transcript:

Julie Yates – Credit Suisse
[C]an you guys update us on the outstanding wide body RFP? Do you still expect to make a decision by the end of the year?
Richard Anderson – CEO
We’re still working diligently on evaluating both the Airbus and Boeing option. They both have very strong viable options, as do the engine manufacturers Rolls-Royce and GE. And we are in the midst of a very heated competition to see which of those will bring to the table the best economics for our owners. Remarkably right now, it’s an interesting development in the wide-body market because there is so many orders out there the used market is really heating up and the pricing for 10 year-old wide-bodies is about 30% of what you’d otherwise pay. So it’s going to be a very interesting process because the most important thing about this for us is not operating cost its ownership costs and I think that’s how candidly the whole industry are focused on ownership cost. (Emphasis added.)
Jamie Baker – JPMorgan
Richard, just as a follow-up on the aircraft question, has fuel’s recent decline had any impact on the RFP negotiations or pricing, or how you even think about the new orders that reside in your pipeline at the moment?
Anderson
No, we’re relatively short tailed because — and the problem with big airplane orders is escalation clauses and PDPs. You don’t want to get way out in front of an order or you end up giving up all the competitive economics of the fly off. So we tend to build long-term models that put pretty high fuel prices in because I don’t think, if you take the last 10 years of fuel prices in the industry, there has been a lot of variability but the line has been an upward sloping line. And so we have used very conservative assumptions when we build our financial models to determine what to buy. So from that standpoint, we aren’t going to change our price per gallon assumption over the next 30 years as a result of the short-term changes in crude prices. 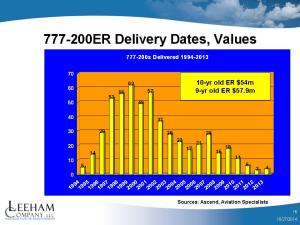 Anderson didn’t specify the 777-200ER, but this aircraft fits most but not all of Delta’s requirements. It’s long range (if not ultra-long range), it has good capacity, it’s got cheap acquisition costs and it’s becoming available in large numbers. A combination of -200ER and new airplanes would lower Delta’s capital costs if this becomes the driving factor, as suggested on the earnings call.

Boeing faces a potential flooding of the market for used 777-200s/200ERs and in a few years the -300/300ERs. There appears to be little potential in the secondary markets for these, or most other, wide-bodies. As Boeing attempts to fill the skyline of the new 777-300ER in advance of the 777-9 EIS in 2020, it may well find itself competing with relatively inexpensive 777-300ERs. 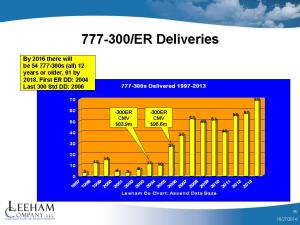 With Middle Eastern carriers a big user of the Boeing 777-300ER, typically on 12-15 year leases or fleet “flips,” a large number of -300ERs should start hitting the market in 2018-2020 and beyond–just about the time Boeing has real problems with the 777 Classic production gap. Source: Ascend, Aviation Specialists. Leeham Co. Chart. Click on image to enlarge.

A large number of -300ERs should begin hitting the secondary market by 2018, at a time when Boeing’s 777 Classic production gap will be a real issue. While -300ER values for 12-15 year airplanes will be +/- $80m compared with a list price of $330m and current offer prices as low as $120m, according to our Market Intelligence (with few takers). But cabin refurbishment and reconfiguration, airframe and engine overhauls of a -300ER can tack on $50m, depending on how fancy the cabin becomes. Thus, it’s conceivable that Boeing’s new -300ER could be less than a refurbished -300ER in some circumstances. On the other hand, it may be a tough sell for an airline to spend that kind of money on either option for an airplane that will likely economically obsolete in the second half of the 2020 decade. Unlike the new life Airbus has breathed into the A330 with the neo option, the 777X is the Boeing neo–making the future for the -300ER appear dim.