737-8ERX: John Leahy, chief operating officer-customers at Airbus, not surprisingly doesn’t think much of the concept Boeing is showing airlines, the 737-8ERX.

“Boeing is getting more and more desperate,” Leahy claimed in a telephone interview we had with him last week. “Boeing is talking the ‘sweet spot.’ They only have one airplane. There isn’t that much of a market at the bottom of the market. I know they are playing around with how do they answer the A321LR. Their answer is focusing on range. There’s no place for bags [in the 737-8ERX], you’re a flying fuel tank. We had to play around quite a bit [to put bags in the A321LR]. If that’s the best they can do, they have a serious problem on their hands.”

What Leahy is asserting: the Boeing 737-7 isn’t selling well at the bottom of the 737 family and neither, in his view, the 737-9, leaving the 737-8 as the “sweet spot” and the “heart of the market” Boeing increasingly refers to.

MOM airplane: Boeing is talking more and more about the “Middle of the Market” airplane and Steven Udvar-Hazy, CEO of Air Lease Corp., essentially telegraphed at the ISTAT conference last week that this will be Boeing’s next airplane with an entry-into-service around 2025. This fits with the timeline we’ve been writing about for the last year: a program launch around 2018 and a 2025 EIS.

As we noted in Pontifications Monday, our own analysis concluded that Boeing’s next airplane should be a small, twin-aisle airplane of 225-250 passengers with a range of about 5,000 miles, or the 225/5000 Sector as well call it.

Having said that, Leahy said Airbus is not looking at an “A322,” a stretched, new-wing and bigger engine version of the A321 that would sit more squarely in the 225-250 seat sector, with more range and better performance than the A321LR. He did include the qualifier, “right now.”

US Scope Clause: Mitsubishi has a looming problem for its MRJ90 with the Scope Clause for US airlines. ATW takes a good look at this.

787 production rates: Here it is, people: we wrote a while back that Boeing is preparing to take production rates of the Boeing 787 beyond the 14/mo announced for 2018. Reuters reports that Kawasaki Heavy Industries, a major industrial partner on the 787, expanded its facilities to go beyond 14. Here’s our chart from that post. 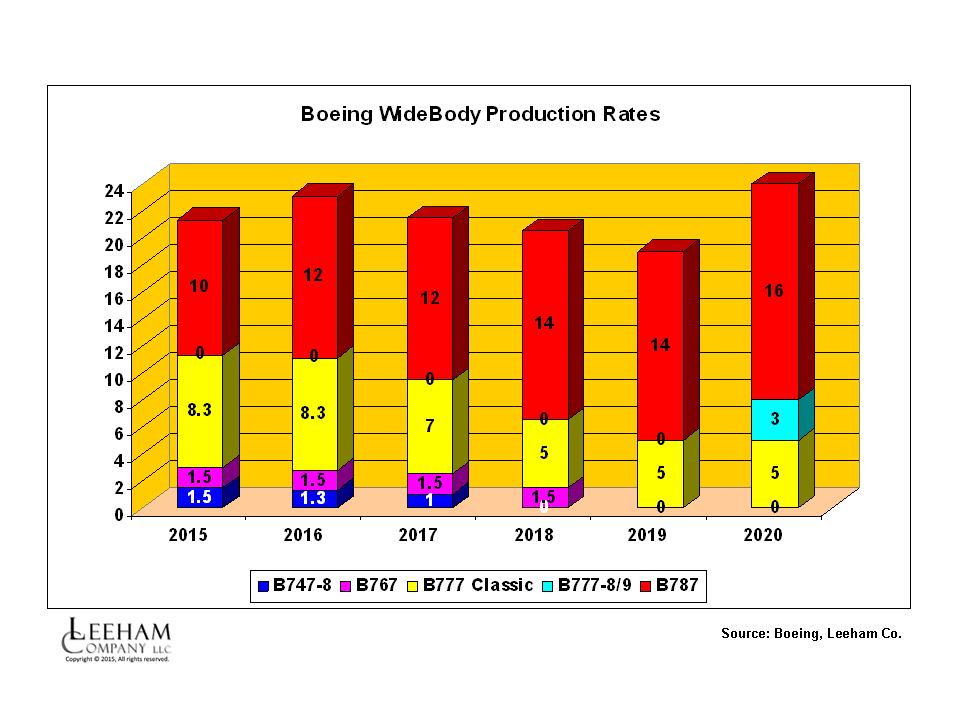 Boeing widebody production rates, based on Boeing’s announced numbers and our forecasts. Click on image to enlarge.

← This is a pivotal year for the A380 as Airbus considers neo, PIPs
Pontifications: USA to the World: “We want to fly everywhere. Period.” →