After the Chinese revolution 1949, civil aviation activities, regulatory as well as passenger carrying, were conducted by China Civil Aviation Authority, CAAC. CAAC was initially managed by the Chinese Air Force and China’s airspace is still 100% controlled by the military.

Initial operation was for domestic traffic only using Russian aircraft types. In 1962 CAAC started international operation to other Communist countries, followed by general international traffic in the 1980s. Aircraft used were predominately Russian types and Boeing 707s bought following President Nixon’s visit to China in 1972. China had previously also bought some British aircraft, including Tridents for short-to-mid haul use.

It wasn’t until 1987 that proper airlines were formed, then splitting CAAC into six geographical airlines that today have merged back into three: Air China (which carried forward the CAAC IATA and ICAO codes), China Eastern and China Southern. With the splitting of CAAC’s roles into a regulatory agency and independent airlines, the development of civil aviation started, Figure 1. 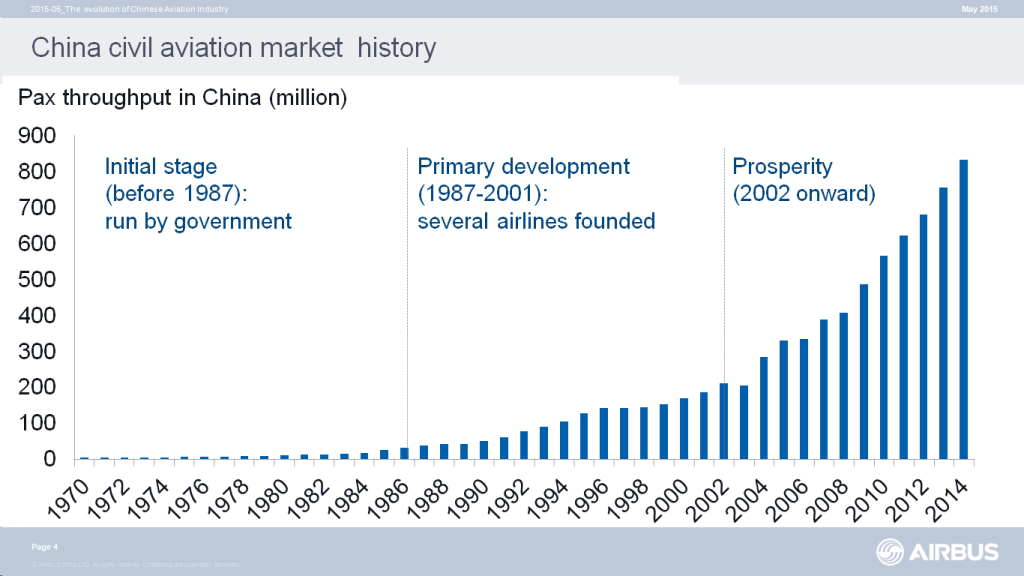 The initial five years were characterized by the newly found airlines finding their feet. After the re-merger of the initial six into today’s three international carriers, the growth started, Figure 2. 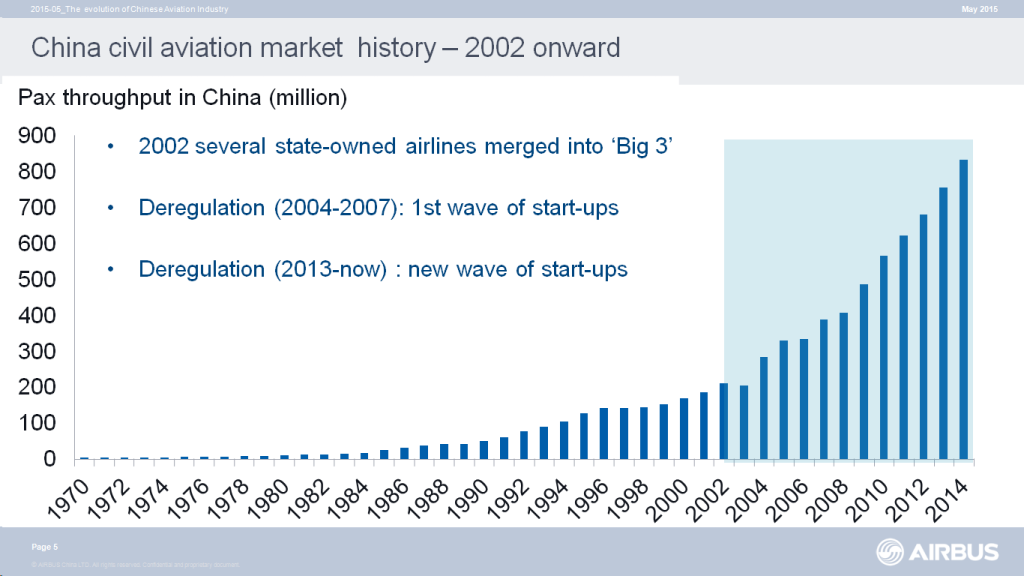 From 2004 non-state airlines were allowed and this created today’s dynamic environment with over 40 Chinese airlines serving the market. By 2014, almost 400 million passengers are carried between 400 airports with the largest being among the world’s leading airports in terms of passenger throughput, Figure 3. 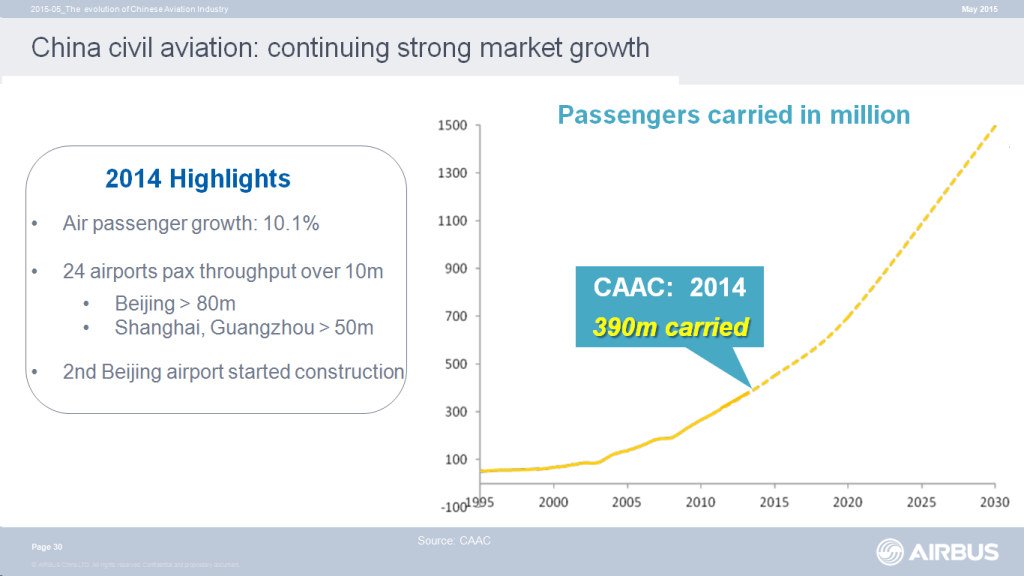 With China leading the developing regions in the world in growth (six billion people with an average air travel growth of 6 % versus one billion in the developed North America, Western Europe and Japan with average 4.2% growth) the Chinese market will overtake the US market and be the world’s largest by 2033, Figure 4. 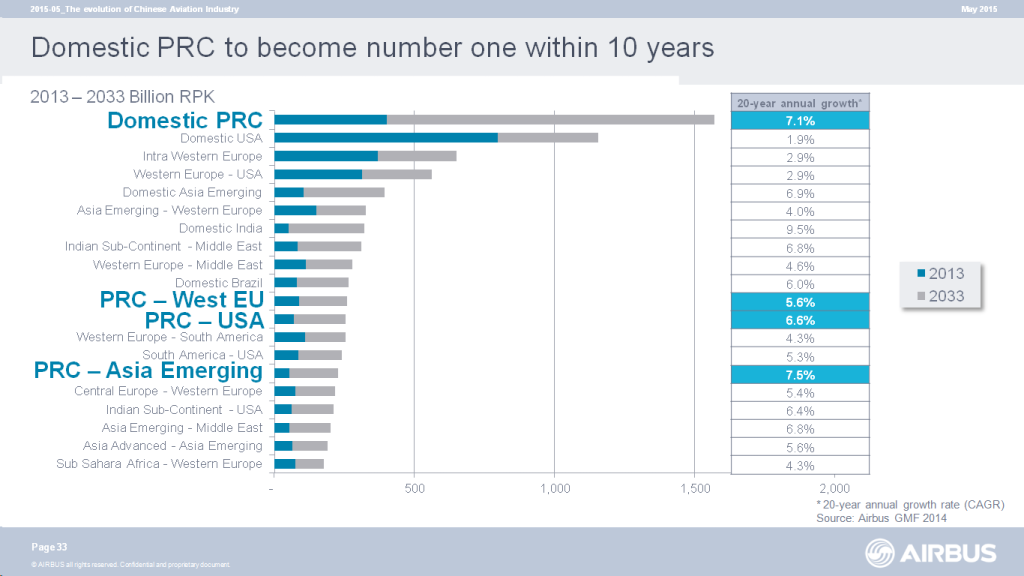 By 1987 the Chinese aircraft market listed the following types:

As can be seen, Boeing had done a good job after President Nixon opened the door in 1972. Airbus had at the time sold a few A310s to China Eastern and had still not sold more than 20 aircraft 10 years later, by 1997. It required the formation of a local sales company, a joint venture A320 wing production facility and final assembly line to correct the slow start, Figure 5. 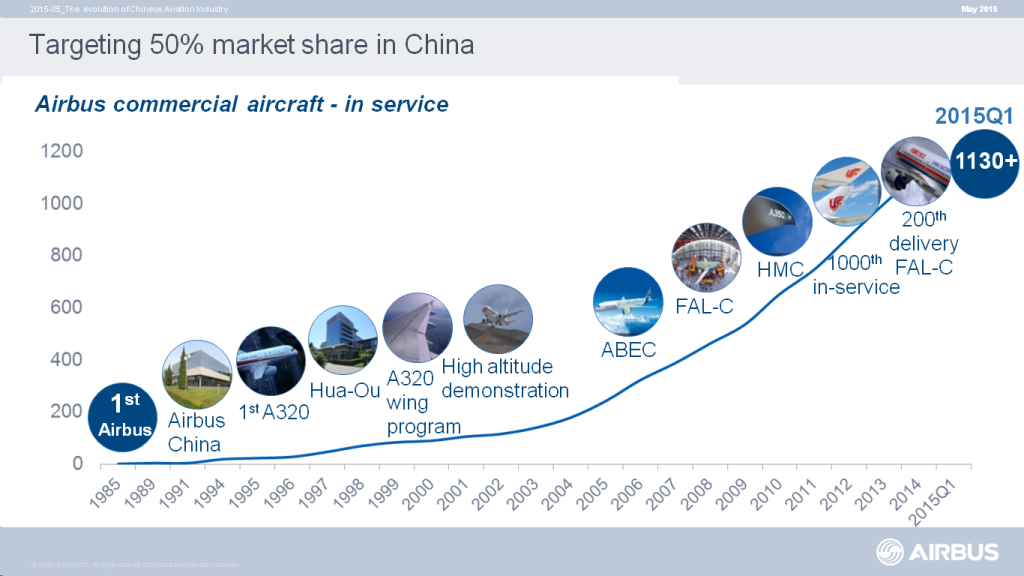 Figure 5. Airbus action in the Chinese market to come to a draw with Boeing by 2013. Source: Airbus. Click for better view.

From 1999 China has produced A320 wing parts at AVIC. Airbus was still number three after Boeing and McDonnell Douglas 20 years into their Chinese venture despite these efforts. This was not the goal; rather it was equal market share to the US competitors by 2015, today Boeing. The result was intensified sales with package deals and then later the setting up an A320 FAL in 2007. The result was an equal share of in-service aircraft to Boeing by 2013, 2 years before target.

The Chinese civil aviation market has had a phenomenal development after the 1987 split of CAAC into proper airlines and a state regulatory agency. The large carriers are still state run as Airbus learned when trying to persuade them into adopting the A330R as a good solution to the domestic congestion problem. Decision making is still conservative and slow.

The dynamic allowed by the establishment of new private airlines since 2003 has enabled the growth that will now carry this market to the world’s largest in the next 20 years.

19 Comments on “Bjorn’s Corner: China’s civil aviation, from nothing to world’s largest in 2030”