Line (FAL) is viewed by some close associates as a personal victory for Tom Enders, the chief executive officer of Airbus Group.

Enders began the quest of a US FAL 10 years ago, when EADS (then the name of Airbus’ parent, now Air Group) joined with Northrop Grumman to bid on the US Air Force Refueling Tanker, the KC-X. The Boeing Co. was the competition, and supplied tankers to the USAF since the end of World War II.

But Boeing’s last KC-135 was delivered in 1966. The KC-767 International program, for Japan and Italy, was an industrial fiasco. Airbus was new to the game with its KC-330, then an untested program. EADS promised to build the tanker in Mobile, so it could claim it was US-assembled and created US jobs.

The idea that Airbus could supply the USAF with tankers instead of Boeing was heretical. The competition was bitter and prolonged. Everyone was stunned when the Air Force selected the KC-330, including EADS and Northrop.

But the USAF mucked up the process. The contract was rebid and this time, Boeing won. Enders’ dream of a US facility seemed dead.

But it wasn’t. Within a year, Alabama officials and Airbus regrouped and announced the plant would be recast as an FAL for the A320 Family. 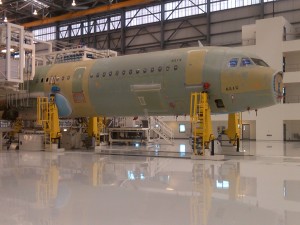 An Airbus A321ceo, the first one that will come off the new Mobile (AL) Final Assembly Line. The airplane is destined for JetBlue. An American Airlines A321ceo is right behind it. Photo by Scott Hamilton. Click on image to enlarge.

By this time, Enders had become CEO of EADS and Fabrice Bregier CEO of Airbus. Together they pursued the dream. Some believed there was peril in this pursuit for Enders, and to a lesser degree, Bregier. The political meddling of the French and German governments in Airbus strategy, driven by employment and work-share, was well known. So was the influence of unions, ever-concerned about job loss. (Some of the more militant unions objected to the idea of the tanker being assembled in Mobile, ignoring the long-term implications of landing an important defense contract with the US military.)

Enders, in an interview yesterday with Leeham News and Comment, shrugged off the political and labor concerns.

“Actually, when we first took the decision and communicated with the politicians and labor unions, I don’t think it was as difficult as you seem to imply. We have China as an example. The China example shows we were able to significantly increase our market share of China through this investment. At the same time we created additional jobs in Europe,” Enders said. 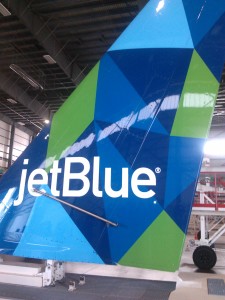 The tail for the first JetBlue Airbus A321ceo is already at the “trans-shipment” plant in Mobile (AL). First flight of the first airplane to come out of the new FAL is planned for 1Q2016. Photo by Scott Hamilton. Click on image to enlarge.

“This is a growth industry, a growing industry, and we have kind of a thumb rule that one employee here trickles something like three additional employees in Europe. That’s a win-win for both sides. This was not difficult politically. This was a real strategic decision in the sense it cannot be wrong to be industrially stronger to be present in the world’s largest aerospace market. This was driving us, plus the fact that the US is the world’s largest single aisle market.”

When the decision was made to create an FAL in Mobile, Airbus had a single-aisle market share in the US of 19%. “We thought we should bring that up.”

Enders conceded that a US FAL in and of itself won’t drive a purchase decision, but all other things being equal, the ability of Airbus now offering an aircraft assembled in America by American workers provides a “psychological” factor.

“There can be some advantage of having aircraft delivered out of Mobile rather than Hamburg, Germany, or Toulouse, France,” he said.

Enders sees the A320 FAL as a key to potential future defense business with the US, noting the Mobile facility was intended to start with the tanker and then expand with a commercial site. Now, Enders sees the reverse: commercial first, followed by a military facility.

40 Comments on “Airbus Mobile FAL a victory for CEO Enders”