16 Sep 2015, © Leeham Co.: Boeing released pictures yesterday of the first 737 MAX 8 being on the Renton Final Assembly Line (FAL) having completed the wing-to-body joins. With the Airbus A320neo now flying again with both Pratt & Whitney GTF and CFM LEAP test vehicles and Bombardier completing 85% on CSeries (having passed 2,400 hours of flight testing), one can say the new single aisles are on their home stretch. 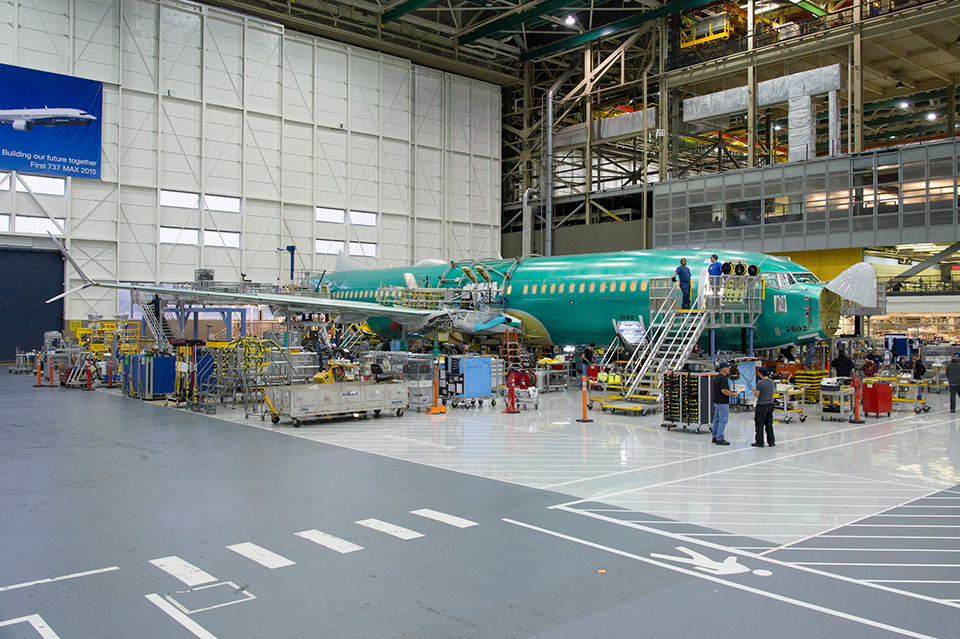 Original planning had the CSeries entering service in December 2013, nearly two years before A320neo (October 2015) and four years before the 737 MAX (4Q2017). With the 737 MAX now on the FAL one can start to review the Entry into Service (EIS) for all three. It will be tighter than the companies have said.

The joining of the wings to the 737 MAX fuselage with the engine pylons on (struts in US English) and with mounted winglets shows that the first MAX test aircraft is making good progress. Boeing said initially that the MAX 8 would enter service in 4Q2017. This has since been improved to 3Q2017. Comparing the 737 MAX program with the A320neo, EIS 3Q2017 seems conservative as well.

After the debacle with the 787 communication (over-promise, under-deliver) Boeing has decided to adopt an under-promise and over-achieve program planning/communication style for its subsequent aircraft programs. This may mean we will see still further improvements for the MAX EIS.

Comparing with the Airbus A320neo program, it had wing join on the FAL March 2014 with first flight in September 2014, a six month delay. Boeing now says the MAX will start test flying early 2016. Depending on what “early 2016” is this means a delay of 4-6 months, i.e. at worst the same time delay as Airbus.

Airbus original planning was for delivery 13 months after start of flight test, or in October this year. With the standstill this summer of the first test aircraft with Pratt Whitney’s GTF for a full three months (due to a clip working loose in the middle of the engine), the planned EIS is now after 15 months. The 737 MAX has only one engine to qualify compared to two for the A320neo. Therefore it should not take longer to qualify the MAX than the 320neo; the complexity of the programs are comparable.

Add 12-15 months to “early 2016” and we speak spring-to-late spring 2017. Boeing launched the program with a target EIS of 4Q2017 and already advanced this to 3Q2017 (believed to be July). Market Intelligence indicates Boeing wants to further advance deliveries into 2017 from 2018, suggesting either a more rapid ramp-up for MAX production or an earlier EIS than is publicly communicated.

It remains to be seen what will be the actual entry into service date for the MAX, but it is likely it will be around 18 months after the A320neo and about a year after the CSeries. This means the span of the entry into service for the new/re-engined single aisles will compress to less than half, from the initial four years to a year and a half.

The neo, MAX and CSeries will cut fuel consumption by 15%-20% on an aircraft level and reduce noise considerably. The CSeries did overflight tests over Toronto’s downtown Billy Bishop Airport last week. The CSeries created less noise than the BBD Q400 that operate at the airport today. Rather than the better operating economics noticed by the airlines, the lower noise levels will be what the traveling public will remember from the EIS of the new single aisles.

← Airbus Mobile FAL a victory for CEO Enders
A320 FAL “good for US aerospace,” says Airbus →