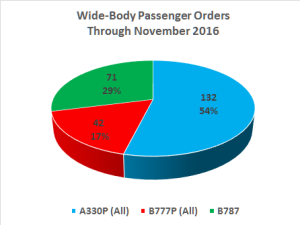 Airbus trailed Boeing in wide-body passenger aircraft orders throughout the year, but now posted 134 orders to 113 for passenger wide-body aircraft. The orders were for 134 A330ceos/neos and for 42 777 Classics and Xs. Cancellations for 19 A350-900s were offset by an equal number of A330-900s as TAP Portugal swapped one model for the other. There were 14 new orders for A350s, leaving a net cancellation of five YTD. This left Airbus with a net of 127 wide-body passenger orders for the year compared with Boeing’s 113.

Airbus has a 54% market share of wide-body passenger orders through November. 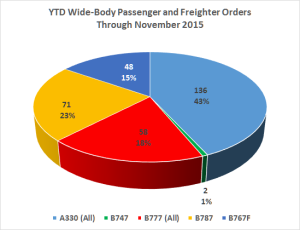 Boeing cleaned up on freighter orders. Airbus posted four A330F orders in the first 11 months of the year. Boeing posted 66 orders, boosted by 48 from FedEx. Two 747-8Fs were posted; these had been white tails and were leased to Air Bridge Cargo, but are owned by Boeing Capital Corp.

Airbus blew away Boeing in the single aisle competition YTD, with 876 orders for the A320ceo/neo family compared with 389 737NGs/MAXes, resulting in a 69% market share for Airbus. 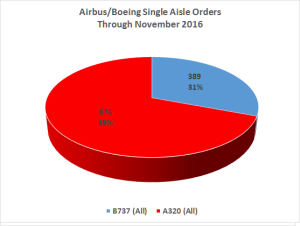