Pontifications: Time to calm down from last week’s news cycle

As you can see from my sarcasm, I disagree with each of these. Here’s why. 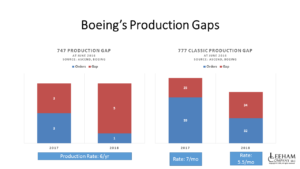 Boeing’s 747-8 and 777 Classic production gaps. Click on image to enlarge.

As LNC reported Friday behind our paywall, these chickens haven’t hatched yet. Deliveries of the aircraft stretch to 2025, according to one report, but specific details haven’t been forthcoming. Given that Iran Air also agreed to buy 118 Airbuses, including the A350-1000 and A380, the 218 airplanes between the two companies is a lot to assimilate into the fleet.

The 15 777-300ERs won’t fill Boeing’s production gap between 2017-2020. There are only four 747-8s in the deal. Considering production is only six a year going forward, and next year has a gap of three, theoretically the Iran Air deal could fill the gap in 2017. But it’s unlikely. All the contingencies may not be fulfilled for months (if at all, if some Republicans have their way in Congress). If these are passenger airplanes, it’s too late to order Buyer Furnished Equipment for next year, and barely enough time for 2018. If these are freighters, production for 2017 should be underway now. So I doubt there are 2017 delivery slots involved.

In 2018, there is now one 747-8F to an unidentified customer listed in the Ascend data base scheduled for delivery. This leaves five slots. It’s doubtful Iran Air would take all four 747-8s in one year, though it could. But then there are the A380s (six of them) to consider. When do these figure to deliver? This isn’t known.

So Iran Air is not the savior.

Neither is Volga. Bloomberg first broke the news on June 20 that Volga may firm up 10 orders at Farnborough. But this deal still won’t fill the production line, even at

When the MOU was announced at Paris for “up to” 20 747-8Fs, Volga said deliveries would be spread over seven years. If these were evenly spread, this is 3/yr (and one year of two). Volga took delivery of two white tails in November. Bloomberg reports that Volga confirmed it’s the customer for two Undisclosed orders announced this year. Another white tail has already been painted in Air Bridge Cargo colors, a Volga unit. White tails, of course, don’t add to new-build production.

A problem for Volga: it’s relied in the past on ExIm Bank financing. ExIm remains closed to deals of more than $10m. So no ExIm.

Boeing Capital Corp. provided some interim financing on 747-8Fs last year, but Chicago is limiting BCC’s ability to do big deals. So

Southwest often juggles deliveries here and there, but a wholesale deferral of 67 airplanes is unusual. One Wall Street analyst took this to be a bad sign for the program. This is overblown. There are a lot of other factors involved in this decision, some of which airline officials talked about Thursday when this was announced at an investors day and some which have not been.

This will be a topic of a stand-alone post in the not too distant future.

The British advisory vote to exit the Europe Union and the announcement by Prime Minister David Cameron sent global stocks swooning and the steepest dive in the British Pound in something like 30 years. The next Great Depression is around the corner! Airbus and Boeing, along with their suppliers are doomed!

First, the government doesn’t have to exit the EU because of the vote, although it would be stupid not to follow the results of the advisory vote (stupidity not being beyond the realm of possibility, I’ll admit).

However, negotiating the exit will likely take several years. During this time, any replacement agreements needed for the aerospace and airline industries will almost certainly be negotiated. I haven’t the least concerns for Airbus, Boeing or the supply chain to successfully navigate through this. It’s not as if today we woke up and the EU was one member fewer.

113 Comments on “Pontifications: Time to calm down from last week’s news cycle”