Boeing continue its refrain during its press briefing that its airplanes are better than Airbus. Airbus returned fire moments later in its own press conference that followed Boeing’s.

But the more interesting war that is emerging is between Embraer and Bombardier.

EMB unleashed its arsenal shortly after BBD won a major order from Delta Air Lines for up to 75 CS100s. Embraer, along with Boeing, offered used E190-E1s and 717s. But BBD walked away with the deal after the Province of Quebec pledged to invest US$1bn in the C Series and BBD asked the federal Canadian government for another $1bn.

EMB cried foul, especially after BBD announced an “onerous contract provision” charge of US$500m in connection with the Delta, Air Canada and AirBaltic orders announced in the first five months of this year.

This proved, EMB claims, that the Quebec and Canadian governments are subsidizing BBD, allowing the company to sell the C Series under cost. EMB further claims this is in violation of World Trade Organization rules. A complaint may be filed by Brazil on Embraer’s behalf, depending on what evidence emerges in the coming months.

Bombardier, of course, denies this.

But having fired this salvo, EMB fired another round during its press briefing today. The volley was much more low key, but it represents a change in tactics nonetheless.

EMB officials included direct cost and maintenance comparisons of the EJet E2 vs the CS100. Previously, EMB officials spoke in more generalized terms about “the competition.” This approach is closer to the long-running battle between Airbus and Boeing.

With a new aggressive approach to sales because of the new management at Bombardier, Embraer is taking a harder approach.

It’s a subtle change to those who haven’t been closely watching Embraer. But it’s a shift nonetheless. 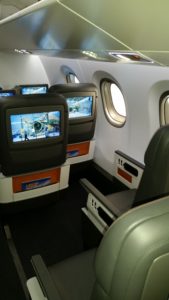 Embraer’s staggered first class seating. The seats are 19.5 inches wide with ample leg room. This allows EMB to have a 2×2 first class.

Embraer also faces a new competitor in the below 90-seat market, Mitsubishi Aircraft Corp’s MRJ90. This has been a bit below the radar because of MAC’s three-year delay with the MRJ. But activity is picking up.

The MRJ90, after interruption to its flight testing, is ramping up activity. The company now has 477 orders and commitments for the MRJ90. The Embraer E175-E2 is the direct competitor. There are 150 identified firm orders for the E175-E2; EMB updates its 2Q order book Thursday.

The MRJ90 begins flight testing at Moses Lake (WA) this summer. LNC visited the E2 cabin mockup today and will visit the MRJ mock up later this week. Like the E2, the MRJ has 2×2 configurations with 18-18 ½ inch seats. MRJ’s first class is 1×2, which was the case with the E1. EMB figured a way to have 2×2 first class seating. The seats are 19 ½ wide and staggered.

We’ll be able to compare the two after this visit.

EMB took the opportunity to tout larger overhead bins in the new E2 than the E1. Officials say the space is greater than that of the C Series.