United: the road back

February 1, 2017, ©. Leeham Co: A headline from one year ago read: “UNITED’S QUEST TO BE LESS AWFUL: A bungled merger. A corruption scandal. Three CEOs in a year. But hey, at least the snacks are free again.” (Bloomberg 14 January 2016).

“Things have changed, but not everything is fixed yet,” said Gary Laderman, United’s SVP Finance, Procurement and Treasurer, at the Airline Economics Growth Frontiers conference in Dublin last week. 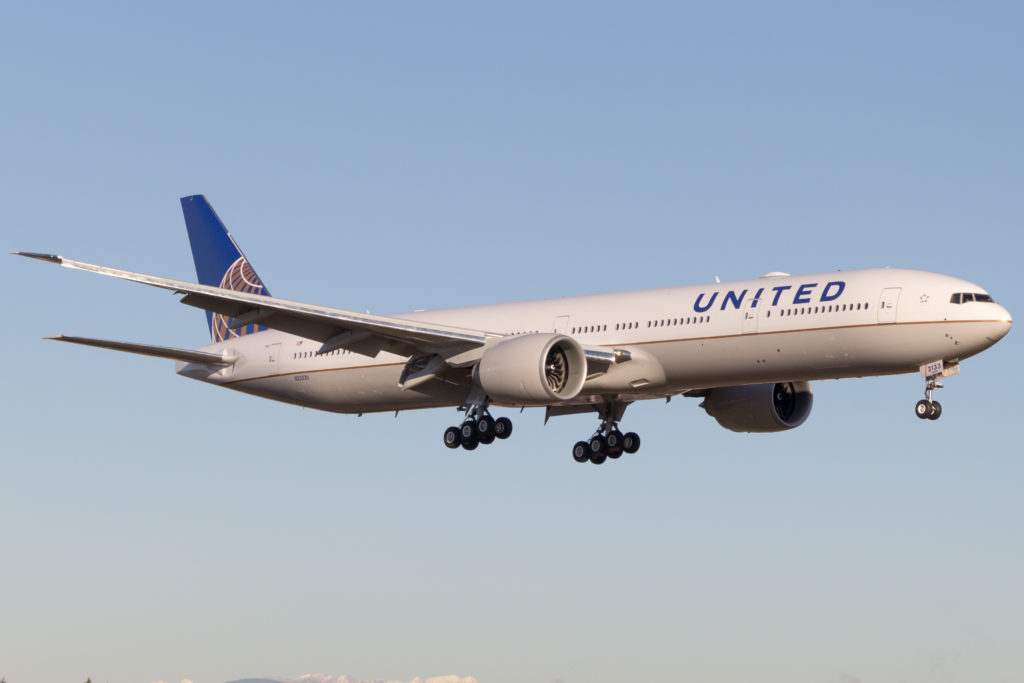 Laderman then candidly went through the history, the fixes and why there is more to come.

“We started our way back with our new CEO, Oscar Munoz,” said Laderman. “Then he had a heart attack and we had to step in for him for a while. He got a heart transplant and is now back stronger than ever. We had some changes on our board, in our management team and I now hold our management team as probably the best in the industry.”

He continued, “Since last year a lot has changed for the better. A key factor in that work is that we now have all labor agreements in place. It didn’t come cheap, but our front line people are now coming to work more motivated than ever to improve how we engage with our customers.” 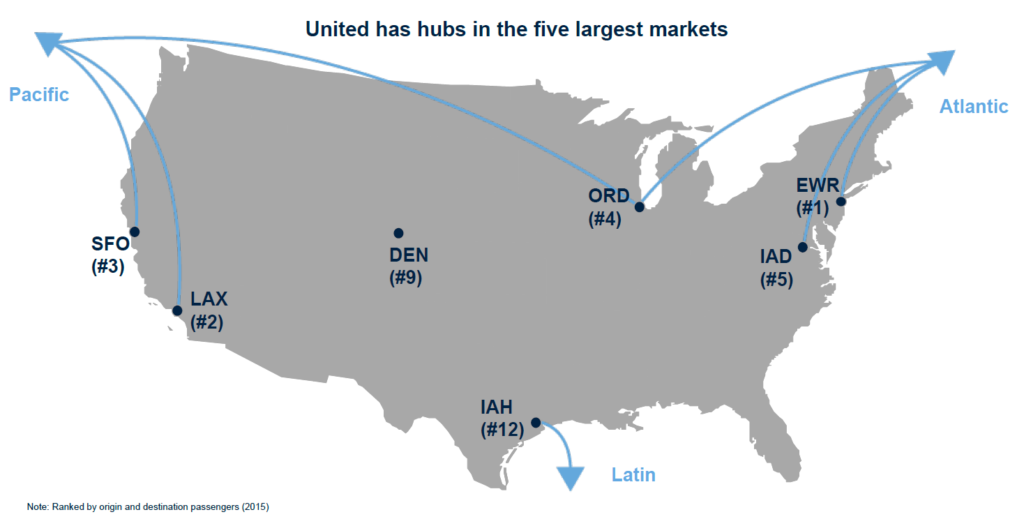 “We also have a good network,” he said. “Our hubs are where people want to travel. (Figure 2.) The hubs work well for domestic travel as well as gateways for trans- Atlantic, Latin America and trans-Pacific travel. Yet we have challenges.”

Strategic mistake since the merger

“What this led us to do over the last five years, through to last year, was focusing on the international network,” Laderman said, “at the expense of the domestic network. Domestically, we thinned out frequency, flew smaller aircraft and to fewer places. (Figure 3.) All the things that a business traveler doesn’t want. He want frequency and he wants space on the aircraft when he books at the last minute and he wants to fly everywhere.” 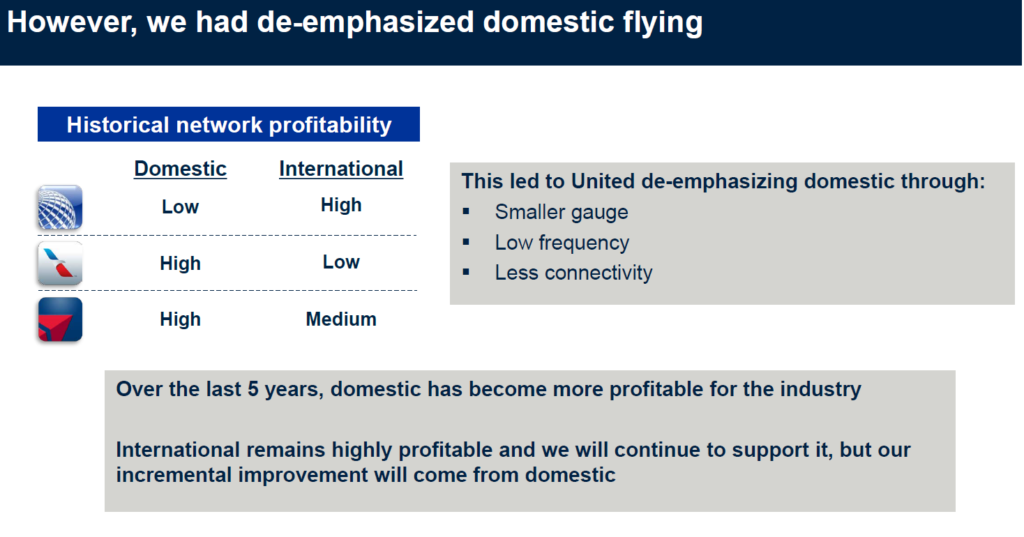 “Over the last five years in the US, the business flipped. Domestic traffic grew and so did its profitability. International did not turn unprofitable, but it could no longer compensate for a weak domestic offering. Our peers had their strength domestically and this is the reason they presented stronger results than us in recent years,” said Laderman.

“We are now doing what we need to do to turn this around. For example, New York (Figure 4). We were the strongest there with 30% of all traffic,” he said. “We are now at 26% and no longer the strongest carrier. What was the reason? We didn’t have the best banked schedules (banked = wave of connections during the day which fit together). We are fixing that.” 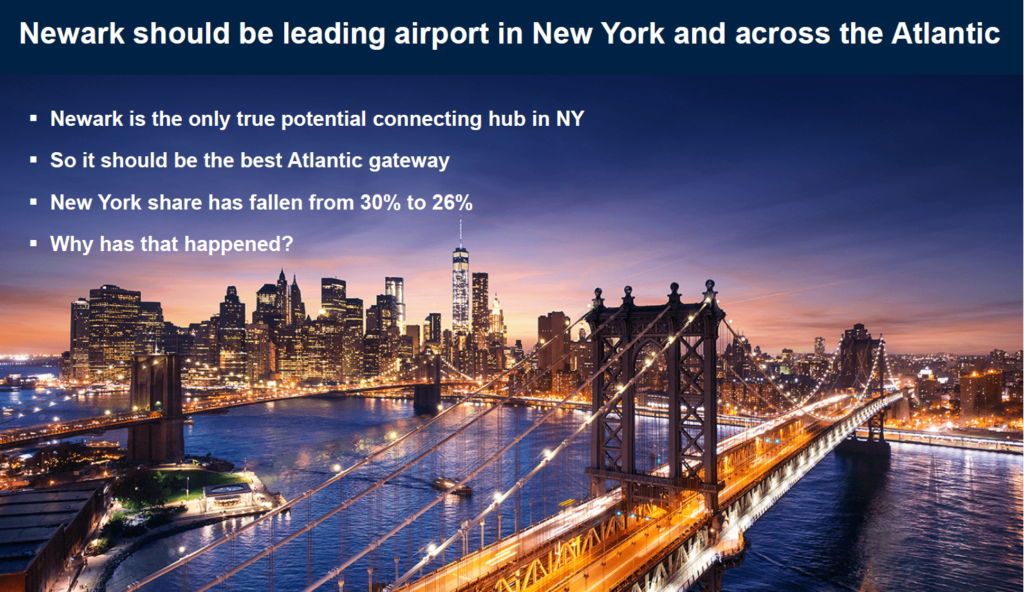 Figure 4. United’s problems at New York, the gate to the Atlantic. Source: United.

He said the same was true in Chicago. “We were weak in connections east-west. American Airlines, the other strong airline at Chicago, had better banked schedules than we. We are on that, and you will see changes over the next year’s.

Focusing on the customer

“Finally,” he said, “we need to focus the customer’s will to only pay for what he wants. We used to have the traditional two class domestic offering, Domestic First and Economy class. What we needed to do was structure our offering so we could offer a fare to compete with the Low Cost Carriers. We introduced Basic Economy. We also added Premium Economy called Economy Plus.”

“We issue 27,000 flight plans a day, we decide on 1m workforce staffing events and do 1.5m baggage scans a day.” said Laderman

“Any issue in these systems quickly escalates to front page news. Despite being 63% better than five years ago, we still need to improve. We are investing an additional $2bn in technology to improve this further,” he said.

Laderman told us the goal for United’s fleet plan was to have total flexibility whichever way the industry took going forward. After investing in a fleet which is the youngest among the peers, the low oil price now allows United to tap into used aircraft markets.

The airline is acquiring 28 Airbus A319s to complement the fleet. The goal for United is to increase the span of capacity flexibility it has in the fleet, Figure 7.

Unencumbered aircraft stand for aircraft owned without loans, aircraft that United can park or sell at ease. A mix with leased aircraft increases this flexibility. The actions to reach the flexibility goal and lower capital expenses for United is shown in Figure 8.

Our comments to United’s fleet plans

United ordered 14 Boeing 777-300ERs, believed to be at sharply discounted pricing as Boeing struggled to fill the production bridge between the 777 Classic and the 777X. These allowed United to accelerate retirement of the 747s.

Officials said they are reviewing the -1000 order with the prospect of shifting at least some of these to smaller aircraft. This review continues.

20 Comments on “United: the road back”