April 10, 2017, © Leeham Co.:  Boeing’s first quarter earnings call is scheduled for April 26, two weeks and two days from today. Officials said on the January earnings call, for year-end 2016, that they will decide this year whether to increase the 787 production rate to 14/mo by the end of the decade.

LNC has long believed this won’t happen. In fact, we predicted last September Boeing will have to lower the production rate from 2020.

The question of the rate is sure to come up on the 26th. I doubt CEO Dennis Muilenburg will be prepared to announce a decision one way or the other. It’s Boeing’s pattern to put off announcements like this until the very last minute, so a go-no go on rate 14 probably won’t be announced until toward the end of the year.

There were 80 firm orders for the 787 placed last year and 11 through last Thursday so far this year. 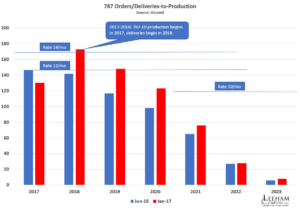 These orders helped fill the near-term production through 2019, according to an analysis of the Ascend data base. Figure 1 compares Ascend data from June(blue) and January (red). The current rate of 12/mo appears solid through 2019.

The fall in deliveries in 2017 and spike in 2018 reflects production of the 787-10, which reduces deliveries this year but spikes next year as accumulated inventory is delivered.

But so far, it’s clear visions of rate 14 aren’t supported.

On the January earnings call, Muilenburg said Boeing sees no scenario in which the current rate of 12/mo can’t be sustained. A new cycle of replacement orders is coming around 2020, he says.

That may be, but the 787 competes with the Airbus A330neo and A350. The former is up to $30m cheaper to buy, market sources tell LNC, and Airbus appears on the cusp of adding more maximum takeoff weight to the A330-900, increasing its range to more than 7,000nm.

With Boeing all but abandoning the 787-8 (virtually none are ordered past 2020 and production of this sub-type is expected to decline to 1/mo in 2018), the new Middle of the Market aircraft (“7M7”) will effectively replace the 787-8.

Even the 787-9 is beginning to show some strain, says one lessor. Deferrals are popping up and lease rates–once routinely in the $1.2m-$1.25m range–have, on occasion, broken the $800k/mo level. It’s more common to see rates in the $900k-$1m/mo range, this lessor says (and so does an advisor to the industry).

We still see a production rate of 10/mo on the horizon, as do some Wall Street analysts. One—Buckingham Research—forecasts a rate of 7/mo early next decade. We think this is a little aggressive, however.

I don’t expect Muilenburg to make any announcements on the April 26 earnings call. But I do expect questions.