Sept. 13, 2017, © Leeham Co.: Bombardier wasn’t “fully at the top of its game for focus and messaging on the Q400 and CRJ,” a top official admitted Tuesday. But the company is “turning that around” and initial results were seen at last summer’s Paris Air Show with a spurt of orders for the turboprop airliner.

But ATR currently has 85% to 90% of the current turboprop backlog (excluding the captive Chinese and Russian markets).

BBD officials said they see a shift emerging that will support sales of the Q400 over the ATR-72.

“There was a need for more basic requirements than there will be going forward,” said Todd Young, Q400 program manager. Airlines are trending toward wanting to board from a gate vs ground level, something the forward-door permits on the Q400 and the aft door on the ATR does not. 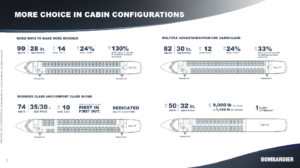 Bombardier now offers several cabin configurations for the Q400 to make it more flexible and attractive,

More capacity is needed; hot-and-high performance will be important in emerging markets like India, China and Southeast Asia; and the Q400’s higher cruising speed makes it easier to catch up to schedule to retain the “integrity” of hubs, Young said.

“In the past, the ATR has been successful for basic solutions, but the market is shifting,” he said.

Bole said Bombardier is also focused on reducing production costs of the Q400 to price it more competitively with the less expensive ATR.

Bombardier revealed a new round of cabin upgrades for the CRJ that go beyond previously implemented larger overhead bins and other improvements. 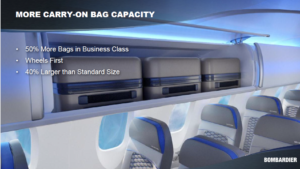 Bombardier is enlarging the bins again on the CRJ to upgrade the cabin.

“The biggest criticism of the CRJ was the cabin,” Bole said. “We’re addressing that. We have the lowest set-mile costs.”

Bole said there is a wide customer base for the CRJ and in the last five years, more than 25 operators for used and new CRJs have been added to the base.

“The market share is low and the backlog is lower than we’d like, but we have the flexibility to adjust production rates,” Bole said.

Still, officials see hope in the future for a resurgence, and it lies mainly with the US Scope Clause.

Scope limits the size, number and weight of aircraft regional airlines can operate for the legacy partners. Embraer and Mitsubishi need scope relaxation on the weight of the airplanes to permit their E175-E2 and MRJ90 to be operated by the regional carriers. Both weigh too much.

Bombardier believes there won’t be any relaxation in the next round of contract negotiations in 2019. The airlines are making money, give-backs aren’t required, there’s a pilot shortage and other factors that played a role in previous relaxation don’t exist.

The CRJ700 and CRJ900 fit within the scope clauses (as do the E175-E1 and MRJ70), and BBD officials claim their airplanes are more economical than any of the others in the same class. (Embraer in particular disputes the claims.)