July 18, 2018, (c) Airfinance Journal: Firm orders had largely dried up by day three of Farnborough 2018, although Boeing could celebrate some big commitments for its Max narrowbody from Vietjet and four undisclosed customers. Elsewhere Bombardier won its first order of the show after Uganda’s flag carrier signed for CRJ900s.

Four unidentified customers committed to a total of 93 Boeing 737 Max aircraft, including 40 high-capacity Max 8s. The customers include at least one airline and at least one lessor. 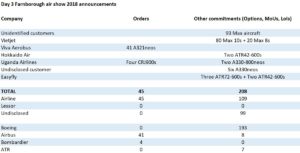 Hokkaido Air signed an MoU for two ATR42-600s to be delivered from 2020. The Japan Airlines subsidiary is replacing its Saab 340s.

Uganda Airlines ordered four Bombardier CRJ900s, which it will operate in a dual-class configuration with 76 seats.

An undisclosed customer committed to six Airbus A330neo aircraft. Airbus did not specify which A330neo type is covered by the MoU.

Uganda Airlines will use Rolls-Royce Trent 7000 engines if its firms up a new MoU for two Airbus A330-800neos.

Republic Airlines will use General Electric CF34-8E engines for an order for 100 Embraer E170/175 regional jets.

3 Comments on “Farnborough: Orders on Day 3”