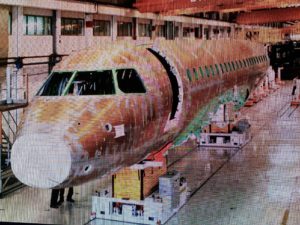 SkyWest Airlines, which flies services for Delta and Alaska, says it is still committed to the aircraft, but it is prepared to switch to the older technology, lighter-weight E175-E1 if necessary.

Still, the CEO of Embraer Commercial Aviation, John Slattery, sees opportunities outside the US for the E2 version.

Roll-out of the first flight test vehicle, one of three, is planned for November. First flight is targeted before the end of the year. Entry into service is planned for 2021—but a customer unconstrained by Scope must be found first.

Slattery, who called into the Embraer Media Day from Asia, where he just landed for a series of sales calls, is undeterred.

Slattery sees demand for the smallest member of the E2 family throughout the globe, including in Asia. He thinks that over time, sales of the E2 family will be roughly split evenly among the 175, 190 and 195. Depending on the configurations, the passenger capacities range from a low of 76 seats in three-classes to 146 in high-density configuration.

The E2 is the new generation of small jets serving regional and less-dense mainline routes. It has the new Pratt & Whitney Geared Turbo Fan engine, new wings (a different wing for each model), systems updates, new landing gear and larger overhead bag bins than the E1, which entered service in 2004.

The E190-E2 entered service a year ago with Europe’s Wideroe. Embraer promised 16% better fuel performance compared with the E1; it’s come in at 17.3%, says Rodrigo de Souza, EVP of Marketing. The OEM promised a 24% per seat gain of the E195-E2 over the E1, aided by 12 more seats. Flight tests show a 25.4% improvement.

The first E195-E2s will be delivered to Brazil’s Azul airlines shortly into the third quarter this year.

Only six E2s have been delivered, including just two this year. The delivery stream is very slow compared with other new aircraft programs, raising questions in some in the market if there are production issues integrating the E2 into the E1 production lines the two airplanes share.

Souza said the slow ramp was intended to avoid production problems. He told the assembled international media that about 20% of this year’s production will be E2s. Embraer has guided the Street it expects 85-95 deliveries this year.

Slattery said the production ramp up will be a “hockey stick.” This means E2 deliveries will be back-end loaded this year, following a pattern (but for entirely different reasons) at Airbus and Boeing in recent years.

He sees the crossover point for E2 production over the E1 next year.

Embraer’s E-Jet lines have the capacity for 13 airplanes a month. Historically, annual production has been in the plus-or-minus 95 range.