September 27, 2019, ©. Leeham News: In our series about classical flight controls (“fly by steel wire”) and Fly-By-Wire (FBW or “fly by electrical wire”) we started a discussion about the need for stability augmentation systems last week and how these are implemented.

Augmentation of the pitch moment curve

Normal flying for an airliner keeps the angle of attack well below 10 degrees. Cruise is typically at three degrees AoA and normal turns in a climb, cruise and descent will keep the AoA below five degrees.

An airliner will fly at higher AoA just after takeoff and before landing. The landing configuration with full flaps and a gradually declining airspeed before touch down will cause the aircraft to fly with the highest AoA.

For such flying, the slats are extended. These increase the AoA region before stall upwards with typically five to eight degrees, Figure 2. 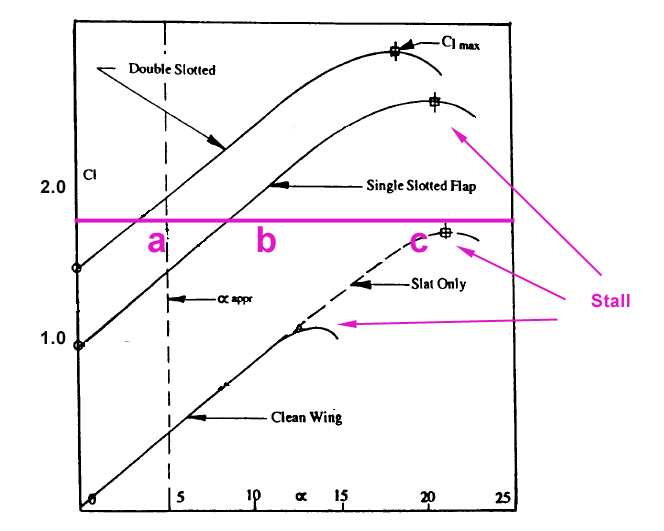 Figure 2. The Cl-AoA (also called Alfa) curves of an airliner with our without slats and flaps. Source: Leeham Co.

The angle of attack during approach is typically below 10 degrees with the short time transition to AoAs over just 10 degrees during landing flare or a go-around maneuver.

The pitch moment curve in Figure 1 is for a clean wing (no slat or flaps deployed) when flying at a high AoA like when turning in a circling situation while waiting for approach (trimmed flight is at nine degrees AoA in Figure 1). The influence from the new larger wing-mounted engines has made the aircraft less stable in the region before stall. When flying in take-off or landing configuration the form of the curve would be affected by the deployed slats and flaps. The important change will come from the slats. These make the leading edge of the wing less sensitive to disturbances of the airflow from objects ahead of the wing.

MCAS is not active on the 737 MAX when flaps are deployed. This is because when flaps are out the slats are out as well and these diminish the disturbance to the pitch moment curve from the larger and further forward-higher slung engine nacelles.

So for most aircraft, an augmentation of the pitch moment curve making the aircraft simple to fly for the pilots is restricted to clean wing flying. The difficulty to achieve such a straight, smooth curve varies significantly depending on what pitch flight control system we have.

For a feedback based FBW system, the pilot asks through the Yoke/Stick for a certain Pitch G at high speed or a certain Pitch Rate at a lower speed. The aircraft measures the aircraft’s actual G or Rate and automatically adjust its command to the elevator and pitch trim to reach the value the Pilot has commanded. A varying pitch moment curve is handled by the FBW systems feedback loop. The Pilot feels a consistent aircraft in pitch even in regions of AoA where the base aircraft has deficiencies.

For non-feedback (open loop) FBW system it’s a bit trickier but the aircraft designer still has good tools to straighten the curve. A good example is the E-Jet E1 system. A digital augmentation computer calculates and transmits augmentation signals which are merged with the Pilot’s command from the Yoke. The summed signal straightens any bumps in the pitch moment curve as computers can take input from several sensors and calculate a sophisticated augmentation signal.

For both FBW system types, degraded modes must present an acceptable aircraft to the Pilot. Now any bumps in the pitch moment curve will be felt by the Pilot as the feedback or injected augmentation is no longer present. This puts a limit to how much the pitch stability can be allowed to vary over the curve and how low the stability margin can be at any point.

At first sight, this seems contradictory to what we have learned about backup modes for FBW. These revert to “fly by electrical wires” with no augmentation computers active. The signals go directly from the Yoke/Stick to the flight control surfaces.

This is an implementation decision for the systems which uses it. It’s not a law of nature. If the designers can implement a pitch FBW with augmentation which meets the availability criteria for all degradation scenarios there is no principle difference between it and systems which rely on one to one electrical transmission of the Pilots Yoke/Stick movements.

Classical mechanical systems make augmentation of pitch moment curves trickier still. This is the subject for our next Corner.