Sept. 29, 2019, © Leeham News: The European Union is ready to retaliate against the US for any tariffs imposed, as early as October, in response

to the World Trade Organization authorization to do so in connection with the Airbus subsidies case.

Even though the EU’s case against Boeing before the WTO, seeking authorization to impose subsidies for Boeing’s illegal subsidies, won’t be finished until next spring, the EU, French and German authorities pointed out that previous WTO cases against the US which they won allow them to impose tariffs they haven’t levied.

They are prepared to do so immediately in the Trump Administration levies tariffs on European goods.

France, Germany, Spain and the UK are the member states behind the 15-year trade battle between the EU and US over the subsidies and tax breaks provided Airbus and Boeing.

The WTO will announce as early as the week the total subsidy exposure that may be subject to US tariffs. This figure is believed to be in the $8bn range (and it may turn out to be a wide range). The actual tariffs will be a percentage on this figure.

Although the EU case against Boeing won’t see the tariff authorization until next year, the EU’s historical wins in WTO cases for which it did not levy tariffs enables immediate retaliation, EU, French and German authorities said in recent weeks.

As with US levies on EU member state goods, neither side is required to levy tariffs on the Airbus or Boeing planes, parts or components. Industries and products unrelated to aerospace may be subject to tariffs.

Yet another WTO step

But before the US can impose tariffs, there is yet one more step that has to be completed.

Yet another WTO committee must determine the final level of tariffs and what Airbus airplanes remain out of compliance.

Whether the WTO agrees with both these positions is subject to one more action.

When the WTO cases started and running their course, Bombardier’s C Series was not part of the Airbus complaint. Since then, Airbus acquired 50.01% of the C Series program, renaming it A220. The wings are made in Northern Ireland, which is part of the UK. The UK today is part of the EU.

The content of the wings may be below the levels outline in the US target list for potential levies—this remains a question.

But with the UK’s looming Brexit, another question arises whether tariffs would be levied after the UK departure.

The answer, LNA has learned is yet—because the complaint was against the Airbus member states in addition to the EU. Thus, the UK will continue to be subject to potential tariffs even after leaving the EU.

In April, LNA prepared a summary of Airbus and Boeing backlogs in the US and EU. These are shown here. 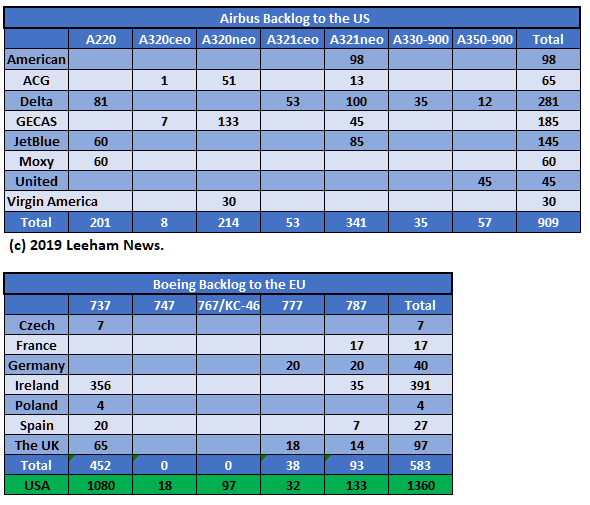 With the grounding of the 737 MAX, there has been little change in the Boeing-EU backlog. Airbus backlogs to the US will have reduced somewhat.

Affected backlogs to lessors are probably less than indicated in the charts. Many of these airplanes deliver to areas outside of the US or EU and are unlikely to be subject to tariffs.

US airlines with Airbus objected to US plans to impose tariffs on Airbus deliveries.