While Sunday’s reports suggest Boeing will halt production, LNA is told a rate cut to between 10-20 airplanes a month is also possible in order to minimize impact to the supply chain.

From a pilot for a US carrier:

The Max is going well -we are just waiting for the AD for Return To Service.

The MCAS is absolutely rock solid – the software upgrades are 100% perfect in testing and I believe the incredible scrutiny on the jet is making it the safest passenger aircraft in history.  I have logged a few hours on the Boeing Sim and we will have a Max sim in place in May.

The Transport Canada quote is ignorant at best.*  MCAS is not a system – and it cannot be removed.  Rather it is a component of the Speed Trim System and a required element for certification. The cert was done correctly and MCAS met the requirements at the time. However, I agree that MCAS was ill-designed because it originally lacked the requirement of fail passive from redundant sensor sources, it has since been completely redesigned and now has survived the most rigorous testing of any single component of avionics in aviation history.

* A Transport Canada manager urged that MCAS be removed from the MAX. (My notation.)

Another of the “influencers” who attended a recent Boeing meeting intended to restore confidence in the MAX provides his report here. 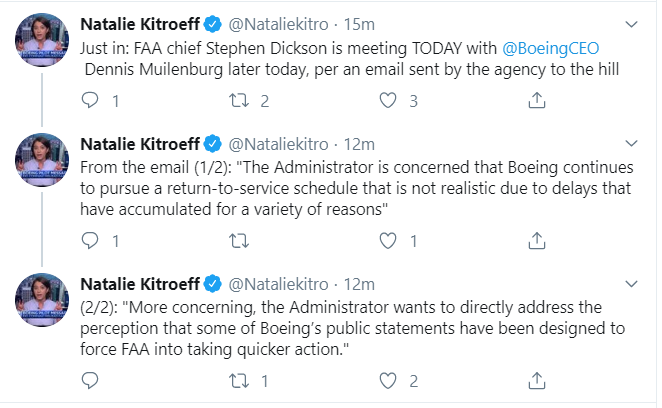 Boeing stepped in it again with the FAA. From Dec. 12.

Boeing updated its Orders and Deliveries website last week. In the Unfilled Orders section, by Customer, it now shows Emirates Airline with 115 orders for the 777X, down from 150. Emirates did not announce which model of the 777X was reduced, but it had 35 -8s on order and the reduction was 35.

And Boeing still shows the 25 777Xs for Etihad Airways, even though the carrier has been clear it’s only taking six. Boeing shows the 777X backlog at 305; by our count, it’s now 286.

With no end to the 737 MAX grounding in sight, Boeing may have no choice but to suspend or reduce production. LNA was the first outlet to raise this issue following the FAA’s appearance before Congress Dec. 11. A decision may come as early as this week.

Suspending production of the 737 wouldn’t be the first time.

In 1997, Boeing stopped production of the 737 and the 747 for three weeks due to overstressing the supply chain and muffed implementation of a supply chain tracking system, the forerunner of today’s ERP/SAP systems. This shutdown led to Boeing’s first annual loss since World War II. It also shut down production in 2008 for 57 days during a strike.

The E175-E2 is the successor to the E175-E1, which is widely used in the USA by regional partners to the US major airlines. The E1 is Scope Clause-compliant. Scope is the pilot union contract that limits the number, seats and the weight of the aircraft that can be operated by the regional partners.

The E2, however, weighs 2,000 lbs more than allowed. Therefore, US regional partners can’t operate the airplane to its maximum design capabilities. The unions won’t amend this weight limit, at least in the current round of negotiations.

Embraer has no firm orders for the airplane,  though it hopes for some non-US orders by year end.

This project is the ultra long range route from Sydney to London. Tis non-stop service is an ambition that Qantas has had for decades.

Boeing offered the larger 777-9 as an interim solution by blocking seats to gain range. However, the -9 is delay at least a year and probably more by engine issues and likely FAA certification process changes from the MAX crisis. It’s not clear the -8 will even be built, despite Boeing statements it will.

← Bjorn’s Corner: Why e in ePlane shall stand for environment. Part 1. Hype versus reality.
Boeing hiring for key mechanic roles even as production cuts rumored →