Europe to Boeing: Not so fast on your WTO move; tariffs still likely

Feb. 24, 2020, © Leeham News: Not so fast, Europe says about Boeing’s claim it is curing illegal tax breaks from Washington State.

The World Trade Organization has to agree to Boeing’s interpretation. This will take at least a year. In the meantime, be prepared for tariffs to be levied on Boeing airplanes by this summer, just as the company hopes the 737 MAX is recertified and deliveries can resume.

Boeing must get the WTO’s approval that the move to suspend the tax breaks will bring the US and Boeing into compliance with a ruling they are illegal.

This process could take a year, said a person familiar with the process. He spoke on the condition of anonymity in order to speak freely.

In the meantime, tariffs that have been authorized for the European Union to impose on Boeing, and other US products, may take effect once the amount is approved. This decision is due in May or June.

“We are confident that, once enacted, this legislation will bring the United States into full compliance and address the lone outstanding finding against it,” Boeing said.

LNA pointed out last week that the EU sought authority to levy tariffs on an old case, relating to federal tax breaks called Foreign Sales Corp. There are other issues, says the source, despite Boeing’s claim. These include tax breaks from Kansas and support from NASA and the Department of Defense.

In a statement, Airbus said it “will review the proposed legislation, which would need to be passed [by Washington State] before implementation.  It is of course up to the WTO to rule on the application of compliance measures and whether the legislation would remove the subsidies and their related adverse effects.”

Nevertheless, there is s positive seen on that side of the Atlantic in Boeing’s move.

“It’s the first time it’s acknowledged it had a subsidy,” the source said.

This conceivably could become the basis for negotiation, it was suggested.

The timing is inconvenient for Boeing. The WTO is set to approve in May or June the amount of tariffs that may be levied. This was just about the time Boeing hoped the MAX will return to service. (Recent events suggest this may slip to later in the summer.)

Imposing tariffs on Boeing airplanes may add to the company’s financial strain.

Airbus agreed to split US tariffs with customers whose airplanes were already in production, the CFO said in November on an Asian investors tour. Customers would be liable for tariffs on subsequent airplanes, he said.

The MAX grounding hits its anniversary date beginning March 10-13. Boeing already wrote of several billion dollars for customer compensation. Beginning a year from the grounding, customers generally have the ability to cancel their contracts. With 400 airplanes built and stored, Boeing wants to deliver these aircraft and resume cash flow.

Customers in the European Union may demand Boeing cover any tariffs.

The tariff amount the WTO will authorize hasn’t been hinted so far. The WTO granted the US the authority to tax imported Airbus aircraft up to 100% of the airplane’s cost, up to $7.5bn in the aggregate. Non-aerospace products from across the EU are also authorized by the WTO for taxation. 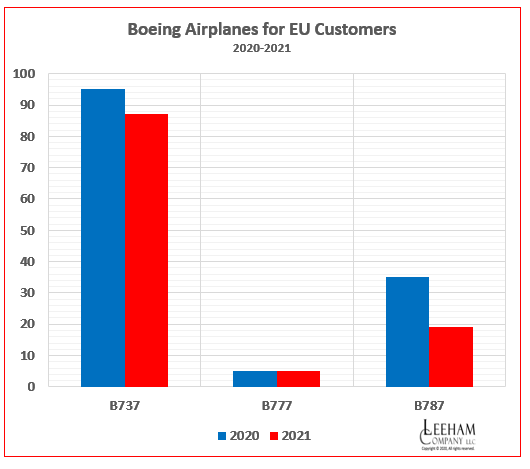 The Trump Administration initially imposed a 10% tax in October. This goes up to 15% in mid-March.

There are 48 MAXes that have been built and stored, undelivered, that will be subject to tariffs.

There are 47 MAXes scheduled for delivery to EU companies in 2020. Most are to Ireland’s Ryanair. The others are to lessors AerCap, Avolon and SMBC Aviation.

There are 87 MAXes scheduled for delivery in 2021, to the same companies.

21 Comments on “Europe to Boeing: Not so fast on your WTO move; tariffs still likely”