No surge in new-build freighters from COVID expected

Aug. 17, 2020, © Leeham News: Coronavirus caused a spike in freight demand. But don’t look for Airbus or Boeing to see a spike in demand for new build freighters.

Now, the 777-9 EIS is rescheduled to 2022. Production of the 777 line is going to 2/mo. With freight demand spiking due to COVID and widebody passenger production not expected to recover until 2025, Boeing thought advancing the -8F launch could boost the X line.

Boeing needs the 777-8F to bolster the 777 production line. There are just 61 777 Classics in the backlog: 18 777-300ERs and 43 777-200LRFs. There are 309 orders for the 777X. Seventeen 777 orders now are classified as iffy, under the ASC 606 accounting standard. These are believed to be all Classics. Some of the freighter orders, for Hong Kong Airlines, are deferred to an indefinite date in the future, according to data.

The production rate is coming down to 2/mo next year. Airlines for the 777X are hit hard by COVID impacts. A recovery of international traffic not forecast until 2024-25 at the earliest.

At a rate of 2/mo, Boeing warned in its 2Q2020 10Q quarterly filing the program faces the prospect of slipping into a forward loss position.

“The level of profitability on the 777X program will be subject to a number of factors. These factors include continued market uncertainty, the impacts of COVID-19 on our productivity as well as impacts on our supply chain and customers, production rate adjustments for other commercial aircraft programs, and potential risks associated with the testing program and the timing of aircraft certification,” Boeing wrote. “One or more of these factors could result in a reach-forward loss on the 777X program in future periods.”

Launching the 777-8F requires a one-time investment to finalize the design, undertake flight testing and certification and tooling for the cargo configuration. Strapped for cash and suspending most R&D spending, Boeing in the past partnered with the engine makers. GE Aviation is the sole-source engine provider for the 777X. Its funds are limited due to its own financial issues, pre-dating COVID. And neither would invest on speculation.

But, according to market intelligence, Boeing could not interest the leading contender to launch the program, FedEx, in the -8F. This intelligence indicates FedEx thought Boeing’s price was too high (and Boeing though FedEx’s counter was too low). The key: Boeing wanted a 2024 EIS and FedEx didn’t want it until 2026. A later EIS would not help Boeing’s production rate need for the 777 line.

Airbus last year was showing a concept for a freighter version of the slow-selling A330-900neo. UPS was a principal target.

But, according to the market, UPS had no interest in the airplane.

It’s become moot anyway in the aftermath of the COVID crisis. Airbus froze all R&D spending except on the A321XLR. There now is no money to develop the -900F.

With COVID prompting a worldwide grounding of airplanes of all types, there suddenly is a plethora of 777-300ERs now parked. Approximately 150 of all vintages were taken out of service.

The market was waiting for the right time to launch a conversion program for the -300ER. Prices of used airplanes needed to fall and adequate feedstock was required. 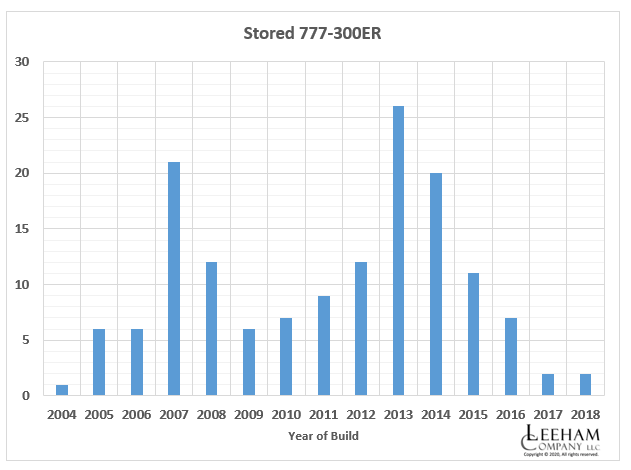 GECAS owns 19 -300ERs, according to a data base—all in service as of last month. GECAS committed to convert 15 of them with an option for 15 more. It is jointly funding the P2F program with IAI.

The program, launched before the COVID crisis erupted, reflects the wide expectation that there will be little secondary market for the -300ER upon retirement or lease returns.

Post-COVID grounding, residual values of the -300ER fell by more than a third, according to Ishka, a UK-based appraisal company. This drops the estimated value of a 10-year old -300ER to the mid-$40m range. A 15-year old model is around $30m.

The conversion price is quoted at $30m but discounts are likely. This compares with a list price of the 777-8P of $410.2m. A freighter will list somewhat higher. Sharp discounts will apply.

With a sharply lower price, including capital and conversion costs, the -300ER will be a strong competitor to the -8F. Furthermore, the -8F is slightly smaller than the -300ER.

The lengths of fuselages of the Classic and X airplanes are:

The -300F will have more cargo space.

These aren’t the only considerations of choosing new or old, converted airplanes.

“Also, factor in the predominance of conversions among smaller payload freighters (less to amortize new-build freighter cost) and you have the primary drivers of new vs. converted.”

Edgar also said that lower-hold capacity is still hovering around only half its pre-virus levels and resulting reliance on freighters, further complicating considerations.

Amazon, which at points in 2018 and 2019 were rumored to be interested in placing a large order for new-build Boeing 767-300ERFs, continues to rely on ACMI operators flying used 767s and more recently converted Boeing 737-800Fs.