Aug. 17, 2020, © Leeham News: At least half the Airbus A330-900 skyline is with airlines that are in administration, technically insolvent or with a politically sanctioned carrier.

These could be characterized as in Red Alert.

The COVID-19 crisis places the remaining orders in Yellow Alert.

There also are 14 A330-800s in backlog. Eight are with Kuwait Airways (two for delivery this year). Two are for Uganda Airlines. The rest are with Unannounced customers.

Seventy-eight -900 orders are from AirAsiaX, which is technically insolvent. The airline is operating minimal service for cargo and repatriation of travelers. AirAsiaX represents 34.5% of the -900’s backlog. The future of the order—and the airline—is in doubt.

Iran Air’s order for 28 -900s is in indefinite suspense due to US sanctions. With the amount of US content in the A330neo, Airbus is unable to export any airplanes to Iran. 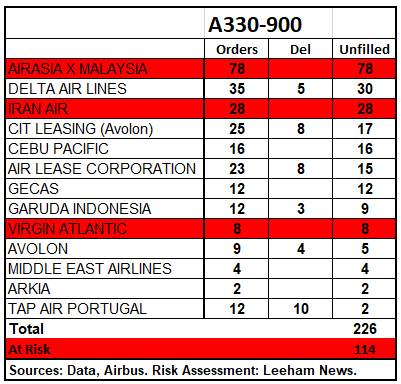 This chart does not include 46 orders from Undisclosed customers. Without detail, it is impossible to assess the risk factor of these.

Virgin Atlantic sought Administration the UK and Chapter 15 bankruptcy in the US. Its restructuring plan indicated intent to eliminate the A330ceos from its fleet. The plan provides for acceptance of the neos. However, until or unless Virgin is successfully restructured, the neo orders (as well as A350-1000s) must be categorized as at risk.

Future of the A330neo

Even before the virus crisis erupted globally in March, the future of the A330neo program had a cloud over it. There are only 336 orders since the program was launched in 2014. The skyline quality was weak due to the AirAsiaX concentration and the Iran Air order.

The production rate was reduced before the virus crisis. Production is now going to 2/mo. The A330-800 is a niche airplane with a range of more than 8,000nm.

COVID-19 may mean the death knell for AirAsiaX. Even if it doesn’t, whether the carrier will maintain its huge neo order is a question.

What’s the future for the A330neo program? “Bleak” is probably the best word to describe it.

Airbus last month claimed it finally complied with the WTO rulings over A350 launch aid. (The WTO has yet to agree or disagree with this claim.) Airbus disputed a WTO ruling that it still hadn’t complied with A380 launch aid findings. USTR also points to this aspect in its statement last week.

The USTR maintains its 15% tariff on Airbus aircraft imported into the US from Europe. A320s assembled in Mobile (AL) are exempt. US content is exempt from tariffs.

“Airbus profoundly regrets that, despite Europe’s recent actions to achieve full compliance, USTR has decided to maintain tariffs on Airbus aircraft — especially at a time when aviation and other sectors are going through an unprecedented crisis,” the company said. “Airbus trusts that Europe will respond appropriately to defend its interests and the interests of all the European companies and sectors, including Airbus, targeted by these tariffs.”

The European Union has been waiting for the WTO to authorize the amount of tariffs the EU can levy on Boeing airplanes and US goods in the illegal subsidies case over 787 support.