Cathay Pacific Airways deferred its order for 21 777-9s until 2025 and beyond. Market intelligence indicates CX wants to cancel this order in exchange for the 787-10.

Even before COVID, some of the 309 orders listed on the Boeing web site were soft. 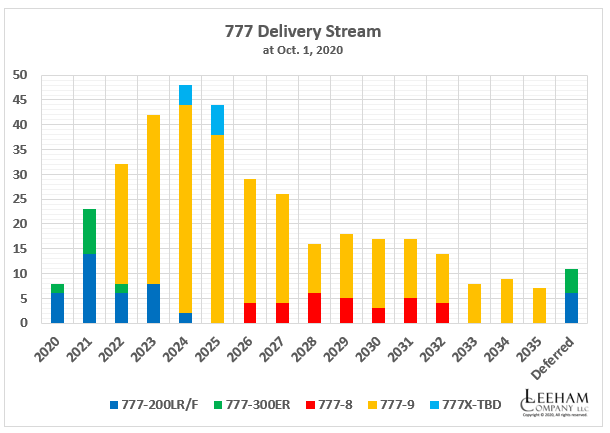 Boeing 777 delivery stream at Oct. 1, 2020. Recent adjustments may not be reflected.

Emirates Airline already reduced its order from 150 to 115 Xs. President Tim Clark indicated he may swap some of the remaining orders for the 787, but a number hasn’t been expressed publicly. This sentiment occurred before the COVID pandemic.

Etihad Airways is listed by Boeing with 25 orders. But long ago, as Etihad’s finances deteriorated and a fleet restructuring began, officials said they wouldn’t take more than six. Even this is soft. As a result of COVID, market intelligence indicates Etihad wants to swap these for the 787-10.

The third Big Three Middle East carrier, Qatar Airways, said in September it remains committed to accept all 60 of its orders between 2022-2029. The Big Three account for 65% of the 777X order book. Emirates has 37% of the backlog.

Boeing already produced the first 777-9s for Lufthansa and Emirates. There are about two dozen -9s stored at Everett Paine Field, where the airplanes are assembled. The production rate for the 777 Classic and X goes to two a month shortly.

Further fragmentation of long haul routes with the introduction of the 737-8 MAX and A321LR/XRL, capable of flying routes of 8-10 hours, demand of the 777X is further undermined. It’s the same fragmentation theory Boeing expanded with the 787 vs the Airbus A380 and Boeing 747-8. Fragmentation of the Very Large Aircraft began with the ETOPS Boeing 767, growing with the A330, 777 Classic and A350.

With about one-third of the backlog orders considered by some to be soft, a few Wall Street aerospace analysts wonder whether Boeing will cancel the program. Even a few lessors believe the program is in jeopardy. 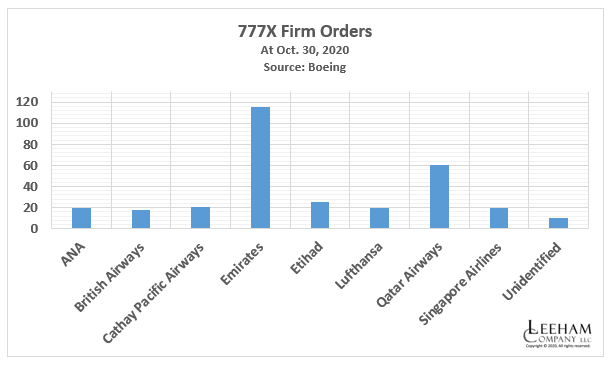 Boeing has a small customer base for the 777X. Source: Boeing.

Even in the radical restructuring now underway at Boeing, I think it unlikely the X program will be canceled. Boeing warned that a forward loss may be in the program’s future. (The 787 program also faces a possible forward loss, Boeing warned, due to the impacts of the pandemic.)

But with some two dozen airplanes already built, at least 60 firm orders (and probably scores more) appearing solid, for now, I just don’t see Boeing tanking the program. Boeing proceeded with the 747-8, for which only 153 orders were received. It also took a multi-billion dollar write off early in the program.

However, the longevity for the X probably will be vastly truncated. Boeing counted on retiring 777-300ERs as a source for new sales. But only one unidentified and eight identified customers signed up for the airplane. The market clearly indicated that smaller is better before the pandemic.

After the pandemic is over, smaller most like remains better.

127 Comments on “Pontifications: Certification timing may push EIS for 777X”