February 12, 2021, ©. Leeham News: After covering the basics of fuel cells last week in our hydrogen airliner series, we now look at what type of system to choose for aircraft propulsion and onboard systems power.

We analyze the propulsion side this week.

Figure 1. A SAFRAN concept for a low emission airliner from its Clean Sky 2 presentation. Source: SAFRAN.

Is fuel cells a good choice for propulsion?

We have already described how a gas turbine can be converted from carbon fuels to hydrogen. In a conversion to burn hydrogen instead of Jet-A1, the size, weight, and efficiency stay the same, with no CO2 and 20% less NOx emissions. Contrail generation seems manageable as the crystals formed from the increased H2O emissions have a changed characteristic that hurt the environment less.

The alternative is to use hydrogen fuel cells to generate electric power to drive a motor that drives the aircraft’s propellers, propfans, or fans.

Figure 2 describes the alternatives we have to drive the thrust generating unit. From the top, the gas turbine core, the series fuel cell with its motor, and at the bottom, the parallel hybrid fuel cell configuration: 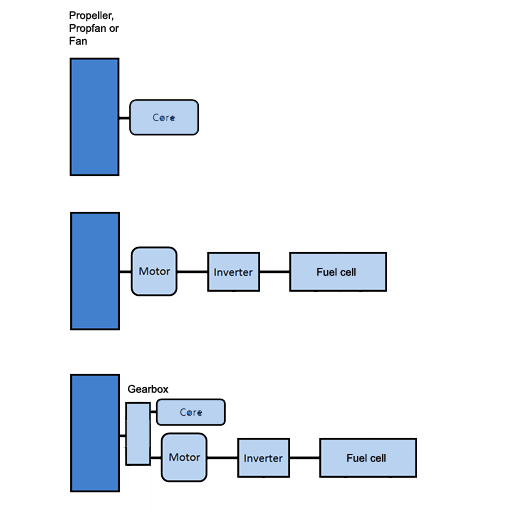 We start by looking at the EU Hydrogen-powered aviation reports‘ 165 seat airliner, Figure 3. 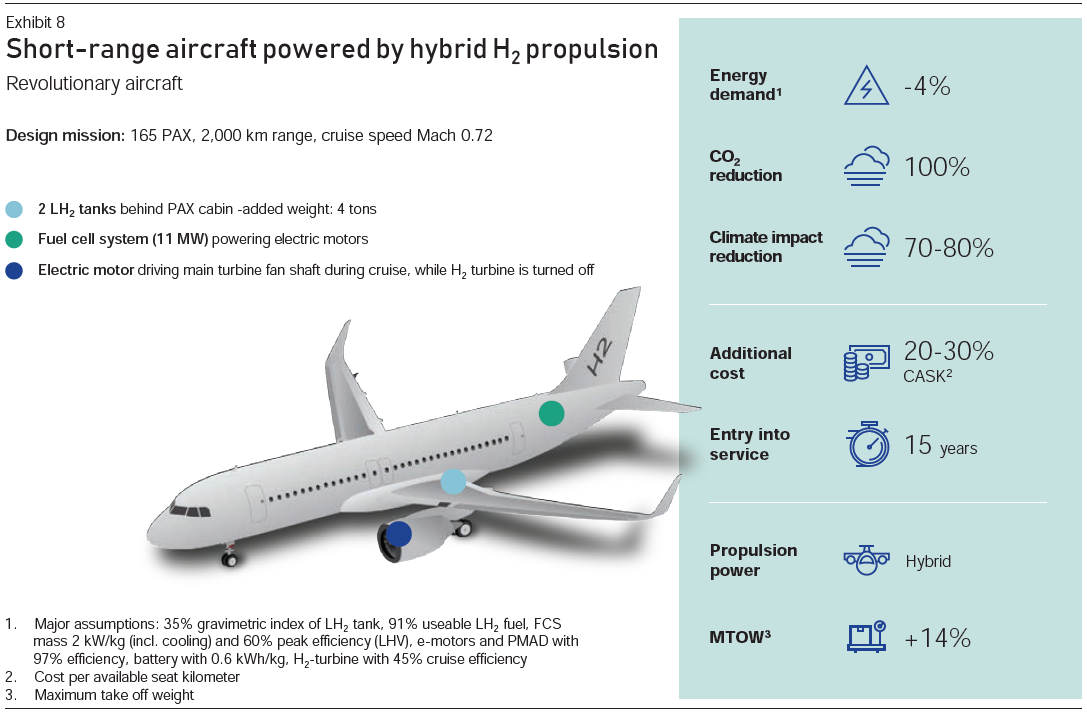 The key data for their simulation, which we also use, is given in the footnotes below the figure. It represents the best knowledge of parameters for a 2035 entry into service airliner.

We compare with today’s gas turbine airliner to give the report’s suggestion the most favorable setting. For this, we use the Pratt & Whitney PW1100 GTF as used on the A320neo (CFM LEAP data would be similar). The GTF engine weighs 2,868kg, according to certification data. Modeled with Gasturb, the core, including the fan gearbox, is about 2000kg and has a volume of 2.4m3. It delivers 20MW shaft power to the fan at takeoff thrust setting.

The EU aircraft is a parallel hybrid with 5.5MW electric cruise motors and 14.5MW gas turbines in parallel for takeoff and climb (the Figure 2 bottom alternative). A cryogenically cooled 5.5MW motor weighs 425kg when assuming 13kW/kg as we’ve done before and we use the report’s 97% efficiency (Magnix’s air-cooled magni500 560kW motor is at 4.2kW/kg and 93% efficiency).

To this, we add a 12MW fuel cell so we can deliver 11MW to the fans as we have lost 1MW in the 97% efficiencies of the inverters and motors. It weighs 6.0t with the given power density of 2.0kW/kg (see Figure 3). We also add two takeoff/climb gas turbines and the gearboxes, in total  3,5t and 3.5m3.

The values for the fuel cell airliner are almost three times those for the gas turbine variant. It could perhaps make sense if the efficiency is considerably higher. It isn’t.

The GTF core efficiency at cruise is 55% (GasTurb simulation data), and burning hydrogen can only improve that. The above fuel cell alternative has an efficiency of 55% with the data given in the report. This is without counting losses in the distribution system.

So the gas turbine alternative is the best for the single-aisle airliner. Is it also for a smaller regional airliner? It’s often argued the fuel cell alternative wins at smaller size aircraft.

Figure 4 shows the data for the report’s 80 seat regional airliner. The propulsive power to the propfans uses the middle configuration in Figure 2, a serial fuel cell alternative. 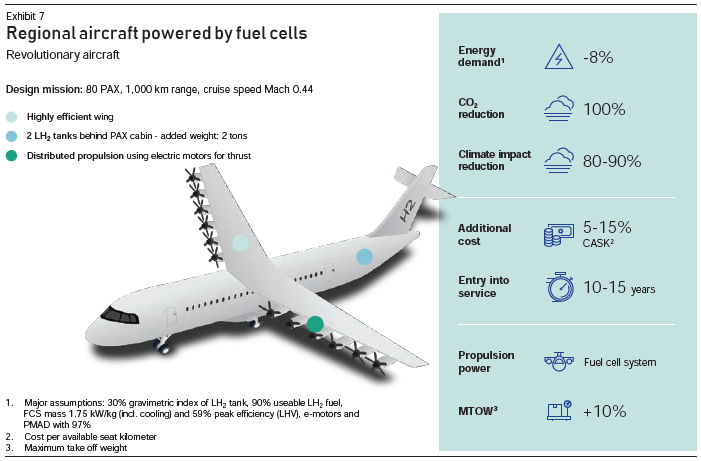 Calculated with the data from the report once again, the shaft power to drive the fans costs us 3.2t (we then don’t count distribution weight or losses). At this power level, a Pratt and Whitney PW127 driving the 70 seat ATR 72-600 weighs 481kg and delivers a maximum of 2MW, and has a 40% cruise efficiency.

The fuel cell system is 3.4 times heavier than the 30 years older PW127 (45 years by 2035). It provides a 54% cruise efficiency on paper, but is it worth 3t given a regional airliner’s short stage lengths? I would say no.

As for the battery-based electric or hybrid airliners, we find the promotors of fuel cell propulsion are far off the reality, even when we use their most optimistic data and leave all spiral consequences of the inefficiencies we find by the side. Why is this?

I can only assume they are blinded by the fuel cells’ 60% efficiency and neglect that today’s gas turbine cores are at 55%. When we add up the losses and the weight/volume penalties, it’s clear the hydrogen gas turbine is the clear winner for delivering shaft power to propellers, propfans, or fans for hydrogen airliners, be these 165 seater jets or regional turboprops.

Is it also the choice for an auxiliary power source? Now we look at delivering electric power to the aircraft’s systems instead of shaft power, and the fuel cell alternative can skip the motors and their inverters. The distribution network for power to the aircraft systems is also at a manageable level.

We analyze the hydrogen APU versus fuel cell in next week’s Corner.