January 14, 2021, ©. Leeham News: Before we dig into the different alternatives we have for more Sustainable Air Transport, let’s look at the problem and its sources.

Figure 1 shows the emissions of CO2 per person since 1900 and the rise of the world temperature. The increase in world temperature changes the weather, with increased weather-related emergencies in recent years.

Figure 1. The increase in CO2 emission per capita and the rise of the world temperature from 1900 to 2018. Source: Wikipedia.

The sources of global warming

As shown in Figure 2, the dominant part of the Greenhouse emissions comes from CO2 (75%), with Methane in second place (17%).

The question is: What’s the source of the CO2? When burning hydrocarbons like our different fuel types (Gasoline, Diesel, Kerosene…), about 3kg CO2 gas is created for each kg of fuel we burn.

Figure 3 shows the parts of society that use hydrocarbon fuels to generate different forms of energy and their emission of CO2 in these processes. It also includes the emissions of Methane, mainly from Agriculture and other Greenhouse gases. 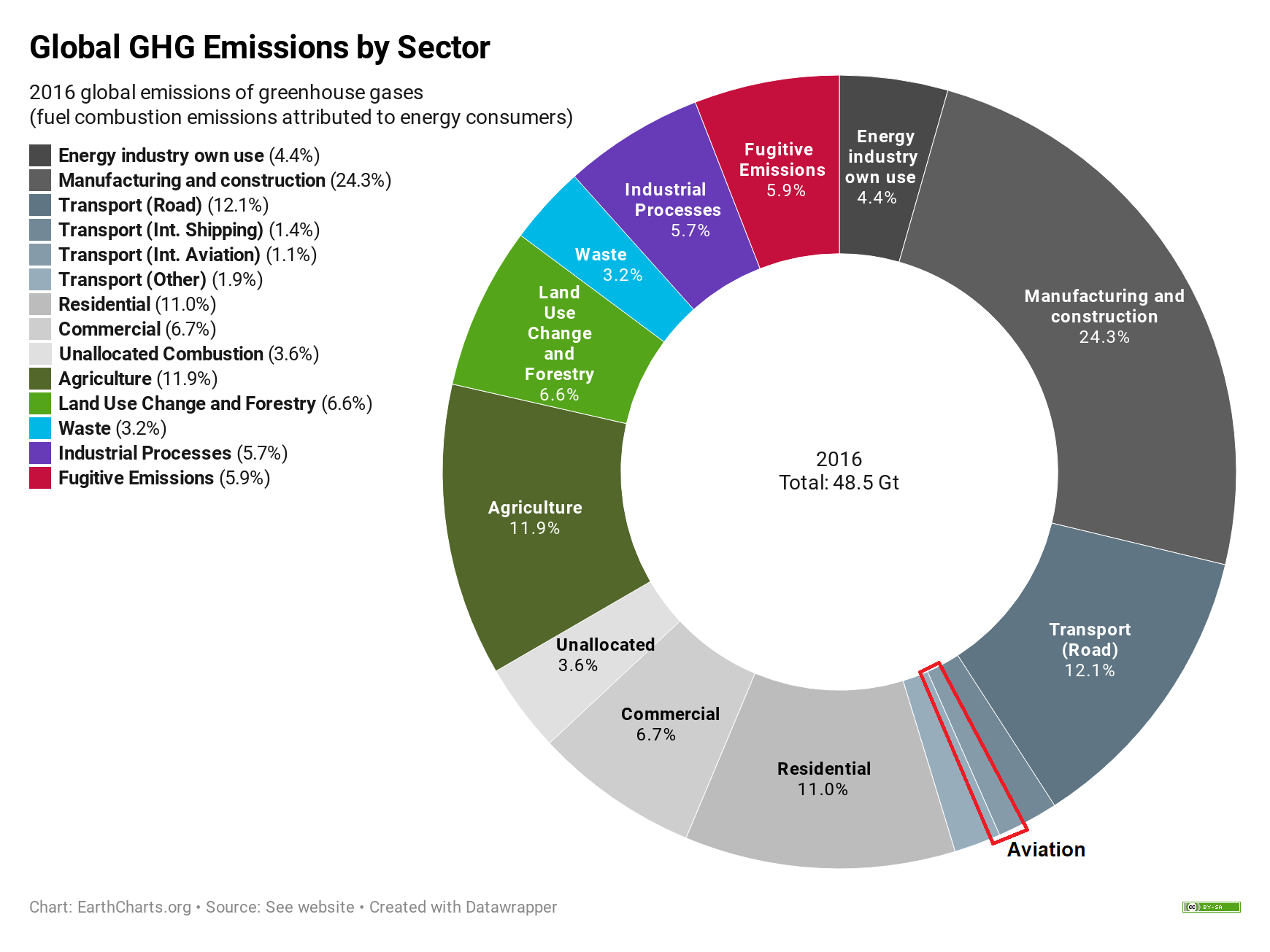 Like the discussion in the comments from last week, one can ask why a 2%-3% part of the problem, where alternatives to the used high energy density fuel are hard to find, should be in the lead in fixing the problem? Isn’t the investments better used in other sectors, where these would achieve more?

It’s a discussion that is not possible to have because the whole theme is infected with different agendas and easy-to-understand messages. I’m not advocating that air transport back-pedal on its responsibility, but the discussion is not done in a fundamental and holistic manner.

A very similar situation was where nuclear power was banned in a very one-eyed debate, without realizing that it forced the increased use of carbon-based energy, and speeded up our climate crisis.

I will not spend the series on this base debate. But the reflection is valid. The targets are the visible ones, easy for the public to identify, rather than those that can change our path most efficiently. It’s about if you are in the public eye or not, not what’s the sensible thing to do.

We see that the transport sector in total is close to a fifth of the problem. The shipping and railways are non-weight-sensitive, and their change to more sustainable means of power from stored energy would cost less than for aviation. Yet it’s not actively debated.

Railways use electrical power to a large degree, but from where does this come? From hydrocarbons? Then it’s straightforward to change; power stations can employ more sustainable energy conversion processes without complex technical problems to solve, and the cost of change is moderate. The same goes for ships.

Road transport is a bit more weight sensitive but is on a path for change. Battery cars or hybrids function well for personal transport (where the battery charging time is less of a problem).

Why do cars function with batteries and hybrids and aircraft don’t?

Let’s reiterate why batteries and hybrids work for cars and not aircraft. The fundamental reason is that cars are energy hogs like no other parts of society, whereas aircraft, especially our airliners, are wonders of efficiency.

The modern airliner uses over 40% of the energy in the fuel to propel the aircraft on its route. It includes the propulsive (fan/propeller) losses.

Compare this with our cars, and we are below 10%. With a typical efficiency of around 7% in our daily commute (as we waste the kinetic energy we’ve built up at every stoplight) a battery or hybrid car has an easy task to improve. Part of it is while combustion engine that should reach a 30% efficiency operates very far off their efficiency point as they are way too large.

Get car efficiency over 15% (by regenerating energy to the battery during braking), and you are hailed as a wonder of efficiency. The truth is, you are a mitigated disaster! The latest car technology is miserably inefficient and can’t be used for aircraft. We are about 200% to 300% short of what we need.

The non-realization of the above is what leads so many naive enthusiasts down the wrong path. They extrapolate the false facts and stick their heads out with lofty promises before doing a proper analysis. They don’t even know that the base efficiency difference in the technologies is some 200% to 300% before the lofty ideas are communicated.

Then they pedal inventions like the possibility to have more propellers, as these are now driven by easy-to-replicate electric motors. It will fix the problem together with “improvements in battery technology.” Had they done their homework, they would have observed we’ve had about a 5% yearly improvement in battery energy density over the last decade and the gap to cover is 50 times that. And the real bummer is more propellers lower the efficiency, but we come to that.

We have a lot to cover

With the above, we have set the scene. Our quest for Sustainable Air Transport is essential, but it won’t fix our Greenhouse gas problem. It will affect it marginally and cost comparatively more than if we took this effort to other parts of the problem. But this is not on the cards, so we dig in and look at what we can do with the resources and means we have.