Boeing officials like to downplay the prospect of re-engining the venerable 737, but studies are very much alive as the company tries to figure out what the market wants and how to respond to the Airbus A320neo.

Boeing has shifted focus on re-engine studies despite already having a solution, officials said during a pre-Paris Air Show media briefing.

John A. Hamilton, the chief engineer on the program, told Leeham News that Boeing is evaluating a fan smaller than the 70 inch diameter of a CFM LEAP-X, which will require changes to the nose gear, to a size that will fit without changing the gear but that is larger than the 61 inch fan on the current CFM-56 5B engine.

The trade-off, Hamilton says, is fuel burn and noise. For every inch the fan is smaller, specific fuel consumption (SFC) is reduced. Hamilton said Boeing is studying just what the trade-off is.

An Airbus official told us that for every inch the fan diameter is reduced, fuel efficiency goes down 0.3 to 0.4 percent. However, an aerospace engineer told us the reduction is not linear, but rather the differences scale on a non-linear basis.

An airline fleet planner familiar with the new Boeing direction told us the studies now underway revolve around what he calls a “hybrid LEAP-X” engine, one with a 66-67 inch fan. The loss in SFC from the smaller fan would be perhaps 1%, he said, but the real issue is that the engine will be noisier than the 70-inch LEAP-X. With the prospect for Stage 5 noise standards to be adopted later this decade, noise is significant.

We asked Hamilton, at the Boeing briefing, about future noise regulations, particularly in Europe where environmental regulations are becoming increasingly aggressive. Would these noise and emissions regulations force Boeing’s hand on re-engining, we asked. Hamilton noted that Stage 4 is in effect today but most airports continue to operate at Stage 3, so transitioning to Stage 5 from Stage 4 would take decades, he said.

Boeing’s 70-inch LEAP-X solution means a significant “work statement” on the 737RE. The nose gear has to be raised 6-8 inches, the wing, wing box and surround structure requires strengthening, and the systems architecture—with roots in the 1960s and updated some throughout subsequent iterations of the airplane—will require major modernization to meet current FAA regulations. If Boeing proceeds with the 70-inch solution, the cost is estimated by Boeing Commercial Airplanes CEO Jim Albaugh to be about the same as the cost for Airbus on its A320neo program. This was publicly announced to be about 1.5bn Euros, or about $2.2bn at today’s exchange rates.

We learned separately from the briefings from a company official close to the studies that the “hybrid LEAP-X” means no nose gear modifications will be required and that costs of the total work statement could be reduced by 10%-20%.

Critical to the decision-making is just how extensive systems upgrades will be required by the FAA.

Boeing’s continued work on the engine (along with CFM, obviously) is significant. Customers are pressuring Boeing to reduce SFC well in advance of the prospect of the entry-into-service of the “new small airplane,” or NSA as Boeing calls it, around 2019. Boeing claims the 737-800 is 8% more efficient today than the A320 and it will be 2% more efficient than the A320neo. A re-engined 737-800RE would reclaim the 8% advantage, Nicole Piasecki, VP of Business Development and Strategic Integration, told the media in the air show briefing. She grudgingly acknowledged the 737-700 and 737-900 aren’t as efficient as the A319 and A321, in response to a question from The Seattle Times’ Dominic Gates.

The following chart was presented by Boeing’s 737 program VP, Beverly Wyse, to the media at the air show briefing, illustrating the percentage advantages claimed by Boeing. 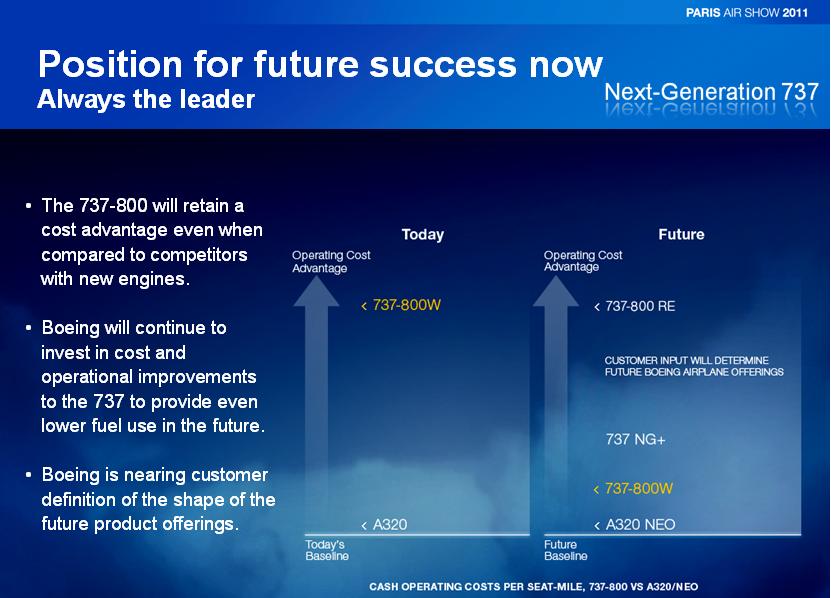 Airbus, to no surprise, disputes the Boeing claims and points out that if the A320 were so deficient, it wouldn’t be capture 50% or more of the sales.

We asked Piasecki about this point and she responded Airbus wins the deals on price.

We followed up after the briefing requesting data from Boeing to support Piasecki’s claim, and received this response:

We compete against the CSeries with the entire 737NG Family–not just the -700. Most customers who operate -700s also operate larger 737-800s. When customers purchase the 737NG, they know they are buying proven economics, proven reliability and great flexibility to adjust their fleet model mix as necessary to meet changing economic and market conditions with commonality across the fleet. That’s extremely important for airlines and something that the Cseries, developed for a niche market, is currently unable to match.

Furthermore, the CSeries is a highly ambitious development program. It’s their first clean-sheet design of an aircraft this size with a high-risk supply chain and proposed rates and complexities they’ve never experienced. Setting aside the other major development programs Bombardier is undertaking, they have a lot to prove in terms of their claims for the Cseries. Even then, our analysis shows that -700 economics are competitive, particularly if you include switching costs associated with changing airplane types.

With customers pressuring Boeing to do something about SFC well before the prospect of the NSA, Boeing has said it won’t stand still on the 737NG. Its challenge is that the plane is so aerodynamically efficient, improving it further is difficult. Mike Bair, VP of Future 737 Programs, told us in March there are possible aerodynamic improvements to the vertical tail and aft fuselage beneath the tail. But the engine is where most of the improvement must come from.

Dominic Gates, of The Seattle Times, remarked to Piasecki at the air show briefing that the Boeing chart above seemed to make the business case for re-engining the 737.

Airbus believes that Boeing will do so. Airbus is expected to end the air show with some 600 orders and commitments (Morgan Stanley analyst Heidi Woods long ago predicted 500-1,000 orders by the end of the air show, a figure many, including Airbus, scoffed at). Airbus is predicting a major 737 operator will order the neo by year end (we believe this prospect is most likely Delta Air Lines, which also operates a large fleet of A319s/A320s). Airbus may have Heidi Wood’s 1,000 orders by year-end.

If Airbus reaches this number, Airbus is known to believe Boeing will have no choice but to proceed with a 737RE with an EIS for around 2016-2017. (The LEAP-X won’t be ready for EIS until mid-2016, and Airbus will have the lion’s share of the initial supply tied up with expected orders.)