Further to our initial analysis of the launched Airbus A330neo, here is our follow up diving deeper into engine matters and maintenance costs.

We met with Rolls Royce Vice President Customer Marketing Richard Goodhead to talk about the Trent T7000 for the A330neo and to straighten some misconceptions around the engine. First the base facts as presented by Airbus and Rolls Royce Monday:

Ignoring for a moment the red box (our emphasis), the engine is a straight derivative of the Rolls Royce Trent T1000TEN from the Boeing 787. The thrust- generating parts of the engine sees no changes, thereby our speculation that we might see the application of Rolls Royce ALPS (Advanced Low Pressure System) CFRP fan blades and fan case did not happen. We asked Richard Goodhead why?

“Even if the ALPS programs composite parts would be ready to go into the T7000 we would not see the weight benefits we have projected as part of this program for an existing engine using the technology,” Goodhead says. “To gain the 150-200kg weight gains we talk about, one has to design the engine from scratch with the technology. Applying it to a T1000 derivative does not bring the necessary benefits. The ALPS technology will see first application in our Advance engine.”

We then addressed the misconception that the 787 engines had to be “converted to bleed engines,” as widely reported in the press. We have been arguing that this is indeed a misconception: the 787 engines, both GENx-1B and Trent T1000, as operated today on the 787 are bleed engines. They bleed about 20% of the core compressor air for engine/nacelle internal purposes. This internal need is present on all jet and turbofan engines. They thereby provide cooling air to turbine stators and blades and the different nozzles. They also provide air for the pressurizing of the engine’s many rotary seals, present at all turbine stages.

For this purpose, there are bleed ports on up to 50% of the compressor stages, tapping just the right pressure and temperature air to the engines different hot parts, low pressure compressor bleed serving the low pressure turbine, higher pressure compressor bleed serving the intermediate turbine and so on. Adding another 5%-7% of air on top of the 20% in order to supply air for cabin air conditioning and wing deice will not be a significant change, in fact it will not require any new bleed outlets on the engines core.

“I can confirm that adding cabin and deice bleed to the Trent T1000 will be one of the simpler tasks when creating the T7000,” Goodhead says. “In fact it will require minimal hardware changes and the additional bleed will affect the engines performance with less then 1/10 of a percent. There are other areas requiring more of our attention, such as the significant reduction in electrical power served to the A330neo airframe compared to the requirements of the 787. The reduction in the drive power to the gearbox where the aircraft’s electrical generators are attached will cause hardware changes on the engines internals. This and the changed mounting of the engine (compared to the mounting of the T700) are more significant challenges for us and Airbus .”

Another subject we covered was the engines maintenance cost. The red box in the slide talks about comparable economics for Total Care services and LLPs (Life Limited Parts in the engine). We asked Goodhead what this all means.

“It means that an airline ordering an A330ceo or A330neo will be offered similar prices for our Total Care maintenance including Life-Limited Parts.” 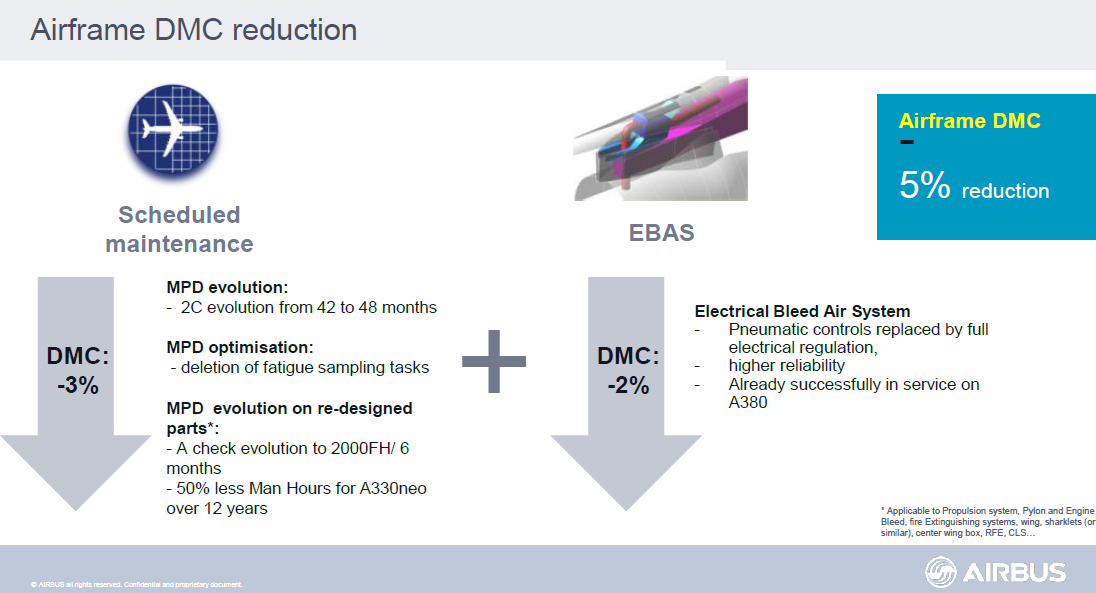 Airbus is joining forces with its strategic partners to challenge one of 787’s strong points, its projected low life cycle maintenance costs.

Cash operating costs (the cash you pay for using the aircraft vs. leaving it parked)

If we look at the major cost positions for the A330neo’s Cash Operating Cost (COC) which can be affected by Airbus and its partners (crew costs is not within the OEMs domain to affect) we can summarize:

–        Fuel costs. Rolls Royce and Airbus will lower these with 12% for long haul operations. For short to medium haul the improvement will range from none to the full 12% depending on stage length. The difference in fuel consumption between a 787 and a A330ceo is in the 11%-15% range so this difference all but disappears depending on model, range and payloads.