Dec. 17, 2014: There is a production gap for single-aisle Airbus and Boeing airplanes that could be exacerbated by the current dramatic drop in oil prices, writes the aerospace analyst for the investment bank UBS in a research note issued today.

Heretofore, focus has been on the production gaps for the Airbus A330ceo and the Boeing 777 Classic, with analyst consensus of those reports we have seen pointing to gaps they believe are insurmountable, and which will demand a rate cut. 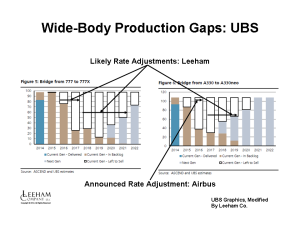 Figure 1. UBS Graphic, modified by Leeham Co. Airbus announced Rate 9 for the A330 and indicated a lower rate. Boeing hasn’t announced any rate reduction for the 777 but analysts suggest the lower rates illustrated (left). Click on image to enlarge.

Airbus has formally announced the rate on the A330 will decline from 10/mo to 9/mo in 4Q2015. At its Global Investors Forum last week, Airbus displayed a graphic that shows a further rate decline. Although officials did not place a number on the rate, our interview with an analyst present said Airbus later indicated a “floor” of 6/mo is anticipated.

Boeing continues to insist it will be able to maintain the current production rates of 8.3/mo for the 777 Classic to the introduction of the 777X in 2020, but analysts predict rate cuts to seven then five and perhaps even four by the time 2020 rolls around. 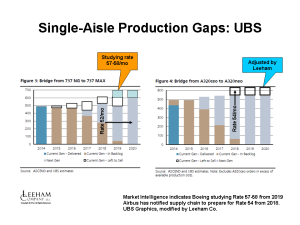 Airbus and Boeing are increasing production rates of the A320 and 737 families in advance of introduction of the neo and MAX, and Boeing further has announced a rate of 52/mo in 2018 (effective in June, according to our Market Intelligence). Boeing is also studying an even higher rate in 2019 of 57-58/mo. Airbus, as we have previously noted, told its supply chain to be prepared to go to rate 54 in 2018.

UBS raises concerns of a production gap for the single-aisle airplanes spurred perhaps by the lower oil prices. The low oil prices, currently $2/gal vs $4/gal a short time ago, means in-service, 10-year old airplanes retain economic viability longer than otherwise when capital costs and the difference in maintenance and other operating expenses are calculated and which offset each other. The UBS slides do not take into account the Rate 9 or 6 for the A330, nor the increased single-aisle rates for the A320 and 737 that our Market Intelligence indicates are coming. We’ve modified the UBS graphics accordingly. The lower rates will narrow the production gaps for the A330 and 777 but higher rates will increase them for the narrow-bodies.

UBS also notes that there is opportunity for carriers to buy late-model, used narrow-bodies to fill near-term capacity needs. We note that Delta Air Lines favors this approach and Southwest Airlines takes advantage of spot opportunities. UBS writes that Air Berlin will phase out 35 late model 737-800s and nine 737-700s. The former have an average age of just 4.8 years and the latter 6.2 years. Delta is already rumored to be a potential buyer of the -800s.

UBS thinks that if fuel prices remain low for 6-12 months, Airbus and Boeing could begin to see deferrals. We believe six months is not long enough, and we remain doubtful that even 12 months would prompt deferrals. But if UBS is correct, it sees Boeing at greater risk because it has a great set of production gaps not only for the 777 but also for the 737.

← Spicejet grounded, no Boeing impact seen
A380, a deep analysis of its competitiveness →