Airliner retirement age in the wake of low fuel prices

March 31, 2015: We have received an update for Avolon’s “Aircraft retirement and storage trends” whitepaper from September 2012. In the age of changing fuel prices it makes for interesting reading as the author, Avolon’s Head of Strategy Dick Forsberg, includes the effects of fuel price changes in his analysis.

The analysis uses data from Ascends database up until 31 Dec 2014 to make its conclusions:

– Behind early retirements of certain aircraft is first of type versions which have limitations in airframe or engines.

– Old aircraft and those who are stored more than two years don’t make it back from the desert.

Avolons whitepaper when published September 2012 made away with the notion that aircraft were being retired earlier. Now two years later it revisits all segments and trends to check if there are any changes, especially against the backdrop of historical high fuel prices turned low and uses old aircraft demographics to understand what happens if fuel prices stays low for a longer period.

The White paper looks at active aircraft fleets and how long they are in service, if they get stored and if they then get back in service. Figure 1 (click on all figures to get a larger view if needed) shows the progression of average retirement age for the worldwide fleet over the years. 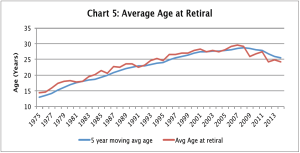 Figure 1 shows incresing aircraft age until 2008 and then a slight decline. 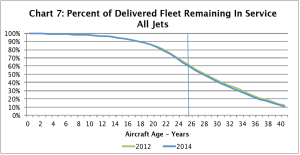 Detailed analysis by Forsberg shows that the downward trend have now stabilized. The mainline jets have an average life expectancy of over 25 years and this has not changed over the last two years, Figure 2 (Green; 2013 and Blue; 2014 curves overlap each other).

There is no real difference between narrowbody and widebody jets other than the widebody aircraft retiring about a year earlier than narrowbodies, Figure 3. 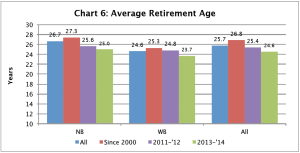 The early retirements have been few, less than 4% of total and the reason behind aircraft going to part out or the desert without returning is that they belong to early production standards with low operating weights (A330/340, Boeing 777) or have first generation engines (A320, 737) and therefore have operational constrains compared to more recent aircraft. 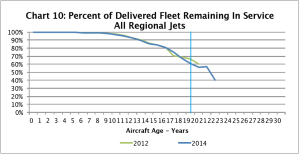 Regional aircraft gets retired earlier, Figure 4. The regional jet segment is younger and a lot of the existing fleet is smaller 50 seat aircraft which has less compelling economics compared to newer and larger 70 and 90 seat jets.

Aircraft are stored because of seasonal variations of demand for air travel but also for longer term changes of demand for a certain type of aircraft. If an aircraft gets stored for longer time, items on the aircraft which have calender time maintenance intervals start to expire and it gets progressively more expensive to take them back into service. Forsberg gives example of re-induction costing typically $1.5m for a narrowbody and $3.5m for a widebody that has been stored for two years. 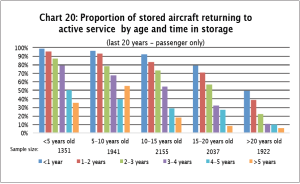 Figure 5. Aircraft age and storage time influences if there is a return to active service. Source: Avolon.

Should the storage be longer than two years or the aircraft is old when being stored the likelihood of it getting back into service diminishes, Figure 5. At an age of 15-20 yaers and a storage of longer than three years only 30% of the aircraft makes it back for a continued operational life.

The other back to come back is as spare parts for running fleets. The likelihood of being cut up and parted out as spares increases the closer an aircraft is to a heavy check when it went into the desert.

The updated whitepaper makes an analysis of likely retirement trends should fuel prices stay low for further two to three years. Of the yearly retirement of 500 to 700 aircraft, about 150 to 200 has a maintenance situation that makes a longer life economically feasible at low fuel prices. The rest of the retirement candidates have such expensive engine or airframe maintenance actions due that a prolongation of their operational life is not justifiable.

Adding the aircraft that can be re-activated from storage to the deferred retirements Forsberg reaches a number of 200 to 300 aircraft that can be kept on for further years. Low fuel prices will also stimulate air travel due to lower fares, this means these 200 to 300 aircraft can not be counted as a net gain for a low fuel price market, the market expands and aircraft demand increases. The end result would be that around 10% of the current OEM production would be affected, something that OEMs can manage.

Aircraft retirement trends have stabilized in recent years, mainline jets having over 50% in service after more than 25 years. Aircraft that gets retired and parted out early was part of first production variants with low capabilities or un-economical engines. These limited production runs were low in number and these retirements constitute less than 4% of the market.

Low fuel prices can lead to old aircraft with an acceptable maintenance status being kept two to three years longer in service. As these numbers affects less than 10% of present new production it will be manageable by the OEMs.