02 October 2015, ©. Leeham Co: After the article about the role of bypass ratio on a turbofan’s efficiency, we now look at other aspects of civil turbofan engines that are worth some light. It’s about how the engine OEMs create different versions of the same engine to cater for different aircraft variants.

The aircraft OEMs create different size variants from the same base model of aircraft by means of stretches. There is no better example of that than the Boeing 737. Over the years it has had more than 10 major versions. For the present in-service series, 737NG, there is three official variants, from the -700 to the -900ER. Originally it also had a smaller -600 variant.

These require engines from 20klbf to 27klbf. How this is achieved and what it means for engine characteristics and reliability is the focus of today’s Corner. We will also compare it to a typical long range engine, the Rolls-Royce Trent 1000/7000, which powers the Boeing 787 and Airbus A330neo.

The way the engines OEMs create the different variants is by injecting more and more fuel into the combustor. This means the combustor temperatures increase and the fuel-air mixture has higher temperatures when hitting the turbines. This means more horsepower gets generated in the turbines, which drives the compressors and fan harder. The engine spins faster, pumps more air through and thereby generates more thrust. Stretching an engine like this is called “throttle push”.

There is, of course, a limit to how far this can be done and there are drawbacks for creating stronger variants with throttle push. The hotter temperatures in the core (both compressors and turbines get hotter at higher RPMs) will shorten the time-on-wing for the engine.

Whereas a 20, 22 or 24klbf CFM56-7Bs will stay on wing for the whole life of its Life Limited Parts (LLPs, the blades+ discs of compressors and turbine which need to be changed after 20,000-30,000 engine cycles), the higher rated versions, 26 and especially 27, will have to be taken off for performance restoration repairs to the hot sections at about half time or even less if the maximum take-off rating is used often, i.e. take-offs are made with little or no thrust de-rate.

The result is that the maintenance costs for the higher rated engines are higher in addition to a higher engine price from the engine OEM (engines are priced in proportion to thrust rating).

The throttle push principle of raising the engine’s thrust means that the engine parameters change for each thrust variant. The harder the core drives the fan the more dominant it gets in the engine. The engine’s pressure ratio (PR) increases as the compressors spins faster but its by-pass ratio (BPR) diminishes.

The fact that the values in a Turbofan vary with throttle position is very clear to see in this GasTurb simulation I did for the Trent 1000: 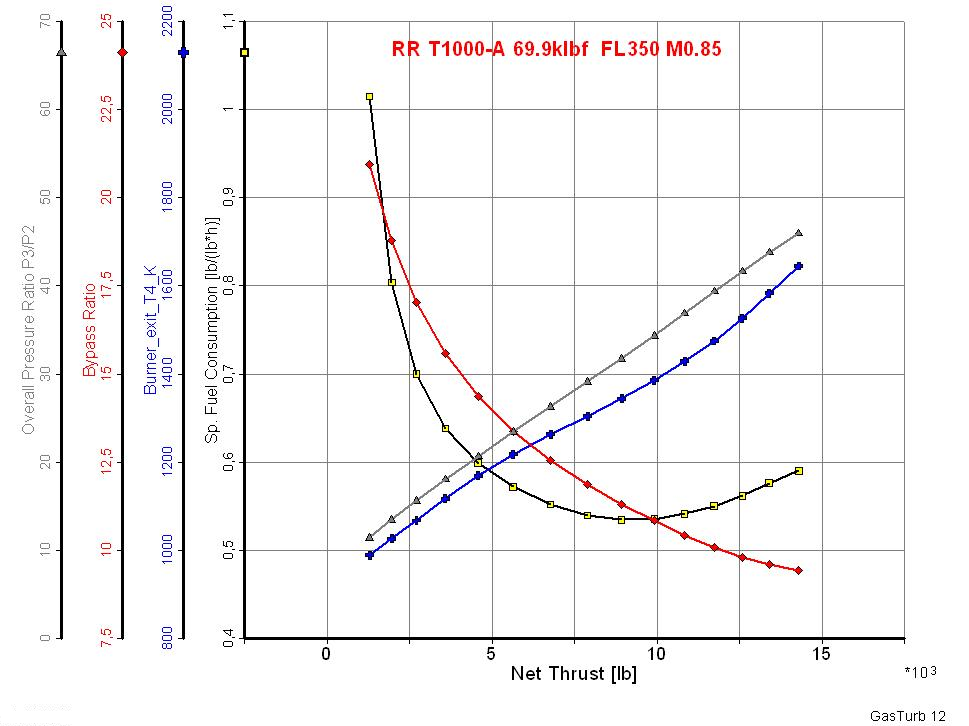 It shows the engines working lines (engine parameter values at different throttle positions) when a 787-8 cruises at FL350. A 787-8 then needs about 8 klbf-12klbf thrust per engine dependent on cruise weight and altitude. At a cruise thrust of 10klbf, the BPR is at 11 (red scale and curve) and the PR at 34, the burner exit temperature is at 1400 Kelvin and TSFC at 0.53 lb/lbf and hour. As can be seen, the values vary greatly with thrust and therefore engine RPM.

Due to the thin air at FL350 weighing much less than at sea level (about a quarter of the seal level weight) the engine needs to spin at around 90% of max RPM to generate the 10klbf cruise thrust. During decent the engine is throttled back to around 60% of max RPM and the BPR raises to 15-20, PR is around 15. The engine can not be throttled back more than around 60% as the compressors need to supply bleed air for the aircraft air condition and de-ice, the engine’s compressors also have problems working reliably at still lower RPM.

As can be seen from the above one shall always ask at what conditions an engine OEM states his engine parameters.