Qantas robbed of longest flight by Emirates and then Singapore airlines

Oct. 14 2015, ©. Leeham Co: The planned “Flight 21” of Singapore Airlines between Singapore and New York would rob Qantas Airways of the title of flying the longest direct flight in the world come 2018.

Qantas operates today’s longest flight, the one between Sydney (SYD) and Dallas- Ft. Worth (TX) (DFW), using its Airbus A380. Emirates plans to take that crown next year with a Dubai (DXB) to Panama City (PTY) flight, Figure 1. It’s fractionally longer than the Qantas flight when comparing great circle distances (the 2015 and 2016 label).

Qantas CEO Allen Joyce just announced that the airline plans to take that title back when the Boeing 787-9 arrives in 2017. This aircraft enables direct service to London Heathrow (LHR) with flights from Perth (PER) in Western Australia, a flight of 7830nm or 18 hours, labeled 2017 in Figure 1. 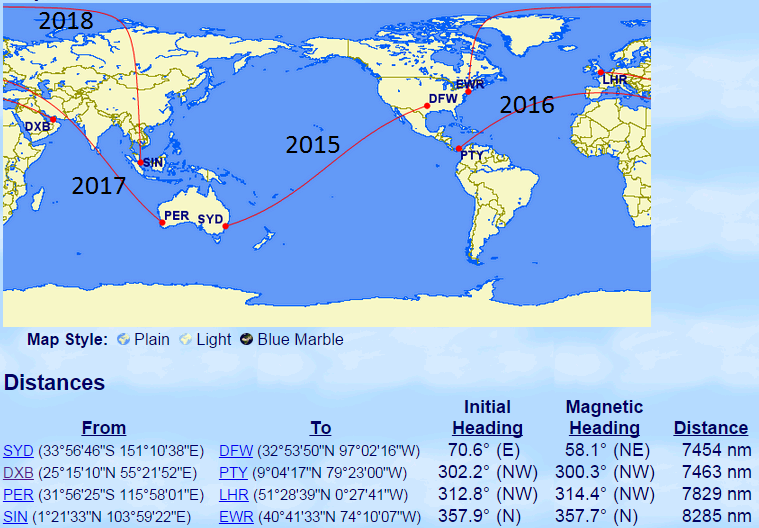 As can be seen (label 2018), the 2018 A350-900ULR “Flight 21” from Changi airport Singapore (SIN) to (we assume) Newark (EWR) close to New York places the title firmly back to Singapore Airlines for the world’s longest commercial flight. (Singapore Airlines is a Star Alliance carrier; Newark is the primary hub of Alliance partner United Airlines.)

The new generation of Boeing and Airbus airliners make 18 to 19 hours flights possible as their fuel efficiency enables a break-even for a premium-heavy flight. Premium seat customers are also the ones interested in paying for a direct connection, thereby avoiding a stop-over which will cost them 4-5 hours travel time in each direction.

The Qantas plans for direct connection between Australia and the UK and Singapore’s reopening of the New York flight shows that we are entering in a new era of air transportation, the return of the Ultra Long Haul flights. There will be very few megacities which will not have direct connections going forward, at least for the business traveler.