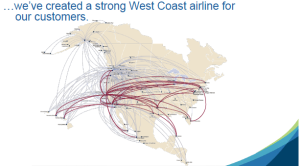 The replay of the Alaska webcast/conference call, with slide show, is here.

Rationale includes what LNC outlined in our March 29 post: growth, access to more gates and slots. Alaska officials said Virgin’s presences in California, combined with Alaska, will give Alaska to #1 market share position on the US West Coast, passing Southwest Airlines’ 21% by one percent.

Here are some highlights from the conference call:

The merger has to clear regulatory hurdles.

The Seattle Times has a long story here.