Not so, says Airbus.

The investment bank was commenting on supplier Hexcel.

The figures are 9% and 15% lower in the two years. However, the higher numbers appear to be more ambitious than Airbus has publicly set previously as its target production rates. Airbus said its goal for production is 10/mo by 2018, although the production capacity is 13/mo. 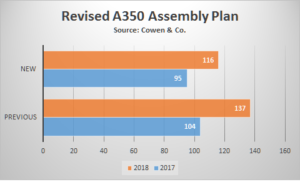 The data appears to give some look into how Airbus wanted to more aggressively ramp up production of the A350 than previously indicated. Sales of the A350 have been negatively impacted by the absence of production slots (a similar problem for Boeing at times). Boeing is ramping up production of the 787 to 12/mo this year and 14/mo before the end of the decade (we believe it will be in 2018). The A350, which truly competes with the Boeing 777 and not the 787, nonetheless lags the Boeing wide-body production plans, which do dip as 747-8 production declines to 6/yr from September and 777 Classic production to 7/mo from 2018.

The Cowen notes there will be three fewer A380s next year (no surprise) but 13 more A330ceos, the airplane that competes with the 787. 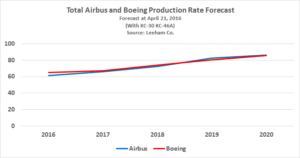 An Airbus spokesman said the Cowen numbers “(while I’m not confirming them) look absolutely consistent with the rates we already have announced.”

Boeing announced revised 747-8 and 777 production rates in January, lowering each. Airbus said it will increase the rate of the A330ceo from 6/mo to 7/mo. These slightly revise LNC’s production rate forecast through 2020. Rates for the A320 and 737 remain as previously forecast.

Airbus and Boeing now will produce about the same number of wide-bodies going forward. Rates on the single-aisles will seesaw back and forth slightly, with different effective dates for rate hikes. Deliveries are another matter. Boeing is still burning off stored 787s (the Terrible Teens), which will pump deliveries this year. 737 delivers will be down slightly this year as the transition to the MAX takes effect, but the production of these airplanes this year will see a boost in deliveries next year.

Airbus deliveries of the A320neo and A350 are negatively affected by supplier challenges. Airplanes are piling up in Toulouse and Hamburg, but should catch up by year-end. The A330neo is planned to enter service in December 2017; we think it likely these few slip into 1Q2018, based on history.