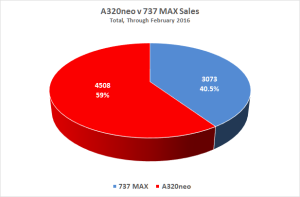 Market sahre data from February–little has changed since–for sales of the A320neo vs 737 MAX families.

Sept. 22, 2016, © Leeham Co.: Early this year Boeing officials began a new message in pushing back against market data that show Airbus captured about 60% of the single aisle market in the A320neo vs 737 MAX sector.

There’s plenty of time, Boeing said, for the MAX to catch up to the neo. Just look, officials said. Southwest Airlines and Ryanair ordered only a fraction of the MAXes they need to replace the 737s they currently operate.

Airbus, on the other hand, has hundreds more neos ordered by the likes of new airlines such as AirAsia and Indigo.

The implication is that the AirAsia and Indigo orders are not as solid as the potential for Southwest and Ryanair.

But it’s not the whole story.

What we looked at

Using Ascend, Airbus and Boeing as data resources, we identified the top operators of the current A320 and 737 families. In the case of the 737, this included the 737-300 because Southwest Airlines still has a large fleet of this model.

We excluded 737 pure freighters but included QC and Combi models.

We also looked at outstanding orders for the A320ceo and 737NG families and factored these into our analysis.

We identified the outstanding orders for the 737 MAX and A320neo families. We grouped all sub-types for both families under the generic MAX or NEO brand. Airbus breaks out the sub-types in its public website, but Boeing does not. Ascend has a pretty good breakout, but large numbers are Series TBD. Thus, lumping both families under one brand eliminates guesswork.

Both companies have hundreds of MAXes and NEOs in the Undisclosed category. We could not put these with any customer, so for purposes of the analysis, we disregarded these figures. Some of these are almost certainly already assigned to Chinese airlines, but the quantity and specificity can’t be ascertained.

We did not include lessors in the analysis; this would result in double-counting.

Over-ordering blends in with Boeing’s inference that some carriers won’t take all the airplanes on order. This is flawed insofar as at least three of these—AirAsia, Norwegian and LionAir—have leasing companies that take up some of the over-ordering. (AirAsia’s leasing company is for sale.)

For simplicity, we subtracted the over-ordering from the results from both companies.

Limiting the customers to the Top 37 (it’s just how it worked out), in round numbers Airbus customers operate 4,200 A320ceos and have 1,900 neos on order. After subtracting the over-orders, this leaves Airbus with the prospect of about 2,300 orders from current operators who either haven’t purchased or under-ordered the neo.

On the Boeing side, the top 37 operate about 4,700 Classics and NGs. These customers have ordered about 1,400 MAXes, leaving a potential to order 3,400 aircraft. This gives Boeing potentially about 1,100 more airplanes to sell to top customers than does Airbus. This compares with the current total order gap of 1,518 in Airbus’ favor.

With hundreds of operators not included in the Top 37, many of which will take neos and MAXes on lease, Airbus and Boeing still have a large pool of customers facing replacement requirements.

Growth is not factored in.

Boeing officials argue that Southwest and Ryanair are better bets, which have under-ordered, than the newer airlines AirAsia/Indigo, which have over-ordered (based on current fleets).

It’s a fair point—up to a point.

Including a small number of NG orders, Southwest currently has 738 737s (including just over 100 Classics) in its fleet. It’s only ordered 200 MAXes. Delta Air Lines hasn’t ordered any re-engined A320 or B737, giving Airbus and Boeing great potential for big orders.

Delta Air Lines has not ordered neos or MAXes of any kind. It has 142 NGs and 135 A320s in its fleet. Delta presents a big prize for either Airbus or Boeing or both, when the carrier finally moves to the reengined aircraft.

AirAsia has a current fleet of 174 and an order for 404 neos (prior to its first neo delivery this month). Boeing looks at this and says quality is at risk. But some portion of the 404 orders are for its leasing company, so the comparison isn’t quite fair.

Indigo, the Indian airline, has 108 ceos in its fleet and an order for 430 ceos and neos. This indicates Indigo over-ordered 322 aircraft on purely a replacement value, but again, growth is not taken into account.

But Boeing’s narrow argument overlooks some quality opportunities for Airbus. New American Airlines operates the world’s largest fleet of A320s; it has 367 of them and just 100 orders. (Boeing has 303 737-800s in its fleet, including a handful of NG orders; but only 100 MAXes on order.)

Boeing remains disadvantaged in this competition, however. Setting aside the smallest family members, the A319neo and 737-7, which haven’t sold well and which neither company really wants to sell (low profit margins), Boeing has a popular 737-8 but a poor-selling 737-9. Airbus’ A320neo competes about on a par with the 737-8 but the A321neo far outsells the 737-9. The 9 MAX only represents about 9% of all MAX sales.

Boeing appears to be moving toward a launch of the 737-10, a stretch of the 737-9. But as LNC understands the airplane from our Market Intelligence, the MAX 10 in unlikely to sell well.

During the next few years, Boeing should narrow the market gap considerably but not close it entirely.