21 September 2016, ©. Leeham Co: Norwegian has announced that it has now flown its three millionth passenger on their long-haul network. 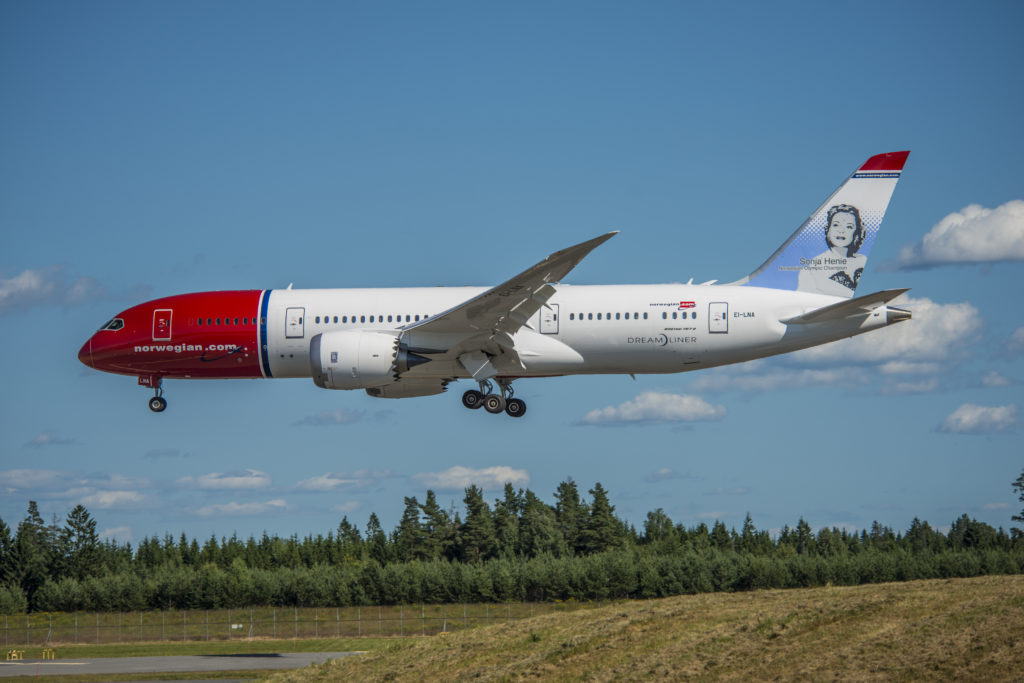 Norwegian first launched low-cost flights from Scandinavia to the U.S. in May 2013, followed by services from London to the US beginning in July 2014. Today, the airline offers 37 nonstop routes between Europe and the U.S. with a steady load factor of 90 per cent or more – in August this year, Norwegian’s long-haul flights achieved a 96 per cent load factor.

As we wrote last week the carrier will augment this network with the arrival of the Boeing 737 MAX 8 next spring. Norwegian has now obtained a UK Operating License which allows the airline access to markets in Asia, Africa and South America. With the MAX 8 and the 787 Norwegian will have a powerful fleet which can operate both on thin long-haul destination as well as larger ones.

Southwest Airlines, Ryanair and JetBlue is also eyeing long haul when they get their longer range 737 MAX and Airbus A320neo. Add to that the established AirAsia X and Jetstar are now on a steady long-haul expansion. The world-wide long-haul market is in for a major change.

Low cost long haul was started in its modern form by AirAsia X and Australian Jetstar. But it’s Norwegian who has expanded its long-haul operation the fastest since 2013. Its strategy to expand on the US market has been somewhat held back by political unwillingness to grant it rights for its Ireland based carrier but it’s now expanding the international destinations as fast as its fleet allows.

Norwegian presently operate 11 Boeing 787 but has a further 31 on order. Add to that the 108 737 MAX 8 that start arriving 2Q 2017. Norwegian currently operate long-haul from Oslo, Stockholm, Copenhagen and Gatwick and started flights from Paris this summer. Destinations are New York, Ft Lauderdale, Orlando, Los Angeles, Oakland, Puerto Rico and Bangkok.

The long-haul network will now expand as fast as new aircraft will allow. There will be reasons for classical long-haul carriers like British Airways, SAS, Air France-KLM and the US carriers to prepare for a long and hard fight for the price sensitive part of the market . The problem for these carriers is that some of their primary markets are within the areas where established long-haul LCCs expand and other powerful LCCs will now follow suit.

The real joker for LCC long-haul is the new re-engined single aisle 737 and A320. The longest range standard models can take on sectors up to 3,200nm, which makes sectors like West Europe to East coast USA or Europe to the Gulf states possible. Get the high gross weight A321LR and you can penetrate markets 300nm further out.

With a suitable cabin using Premium economy and Economy with light weight seats, 160 to 210 passengers can be transported with an acceptable comfort for flights lasting up to eight hours.

The 737 MAX 8 is the longest legged aircraft out of the box by virtue of its wing holding the fuel equivalent of an A320neo with an extra cargo bay tank. Once the A320neo has an extra tank in the belly it can compete with the MAX 8 on flights up to seven hours. Their operating costs on such distances are very similar.

An A321LR comes with up to three extra tanks in the cargo area to match its increased take-off weight. It can still fill its tanks with a load of 200 passengers + holiday baggage for legs up to eight and a half hours duration. Seat mile costs are then very competitive with the best dual aisle wide-body aircraft.