The period after the Soviet Union

As we finished last week, Aeroflot had around 200,000 employees operating 2,000 aircraft at the end of the Soviet era. The transformation from a state-controlled Soviet Union to independent states took from early 1990 to end 1991. In December 1991, the Commonwealth of Independent States (CIS) was formed with nine out of the 15 former Soviet Republics as members. Russia transformed into the Russian federation, geographically the largest country in the world with 145m inhabitants living in 22 republics.

The states that left the Soviet Union formed their own airlines out of the Aeroflot organizations in the areas. Aeroflot’s central part stayed with Russia, but the Russian domestic traffic was to a large part operated by 30 spun off “Babyflots,” formed from Aeroflot’s republic directorates.

Outside Russia, there were around 300 airlines set up by the former Soviet states. The majority did not have the critical mass to operate as airlines. Operations suffered as a result, as did safety. Passengers had to wait forever on delayed flights in badly maintained airport facilities. When the aircraft finally took off, it was often overloaded and had remaining deficiencies.

Accidents were the consequence, caused by lapsed maintenance, bad operational practices and simple lack of means to operate. In the mid-1990s, the US Embassy recommended travelers flying in the former Soviet Union take the train instead. Flying was too risky.

Gradually, the authorities increased the controls and shut down airlines that could not meet operational standards. At the turn of the century, most of the non-viable airlines had been liquidated or merged into viable operations.

During this time, Aeroflot, which by 1995 was 51% owned by the Russian state with the remaining 49% sold to employees, kept standards. There were no accidents except for one instance where a Captain let his 15-year old son fly. It did not end well. A new Airbus A310 (acquired in 1992 as first foreign aircraft type) with passengers perished.

The domestic market was by then in the hands of major competitors to Aeroflot. The largest domestic airline was Siberian Airlines (today, S7 Airlines). Domestic flights were a quarter of Aeroflot’s operation. With the refocus, Aeroflot gradually worked its way to a domestic leader.

Figure 3 shows the market shares for international and domestic traffic by 2003.

The turn of the century also meant a turn in the business performance. Aeroflot has been profitable since 2000, with a gradual increase in Shareholders equity (Shareholder value gain) over the years, Figure 4.

The airline was now working hard to improve operations. Aeroflot started the transformation to an airline of Western standards. It successively met the operational and safety standards of Western authorities, such as the US FAA and IOSA (IATA’s Operational Safety Audit) .

Soviet aircraft, which were safe but inefficient, were gradually replaced with modern Western types. By 2000, the airline’s fleet contained a mix of Soviet and Western types, Figure 5. 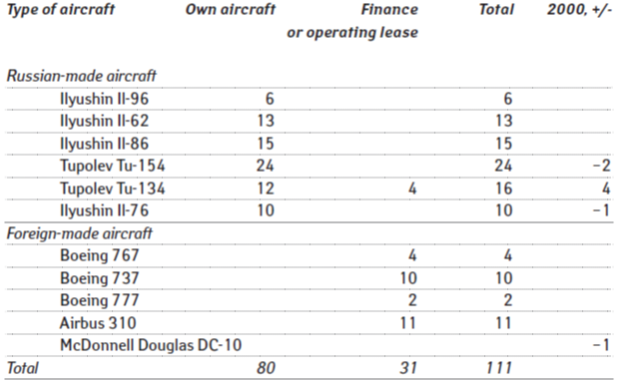 Aeroflot was actively working to enter one of the Global alliances, to increase the connecting traffic to and from alliance partners. It took six years to be accepted in Sky Team (with Delta and Air France/KLM as leading airlines).

There were many requirements to be part of a Global alliance. One was customer satisfaction at 85% or better. Aeroflot set about changing passenger perception. Market and customer research showed that in-flight service (appearance, food, entertainment) needed improvement. A major change program was started. Branding, uniforms, personnel attitudes and in-flight services were improved.

By 2006 Aeroflot was accepted in the Sky Team alliance (figure 6). Investments in customer service and marketing had paid off. Aeroflot’s brand and customer satisfaction research showed increased rankings year by year.

By 2006 the international route network was flying to 90 destinations in 47 countries, Figure 6. The domestic market share was now 17%.

In 2008, Aeroflot set the long-term development of its fleet by signing an agreement with Airbus for 22 A350s and 10 A330s. Figure 7 shows the long-term fleet plan as presented 2007, after the Airbus agreement. 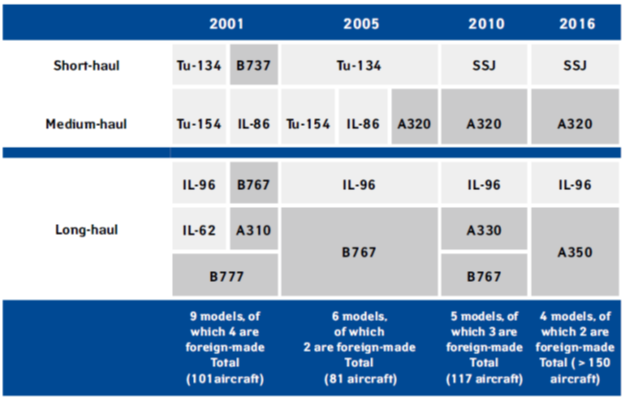 The consolidation of the Russian domestic airline market started after 2000. Gradually, it picked up speed. Aeroflot bought Donavia and named it Aeroflot-Don and later formed Aeroflot-Nord by acquiring Arkhangelsk Airlines. The Russian government in 2010 merged the airlines in its ownership into Aeroflot. Vladivostok Avia, Saravia, SAT Airlines, Orenair and Rossiya Airlines were merged into the Aeroflot group.

With these changes the modern Aeroflot was established. We will cover its development in the next article.

One Comment on “Aeroflot, the route to a modern airline, Part 2”