The result was losses for the first time for the modern Turkish Airlines. Will this growth machine make a comeback? 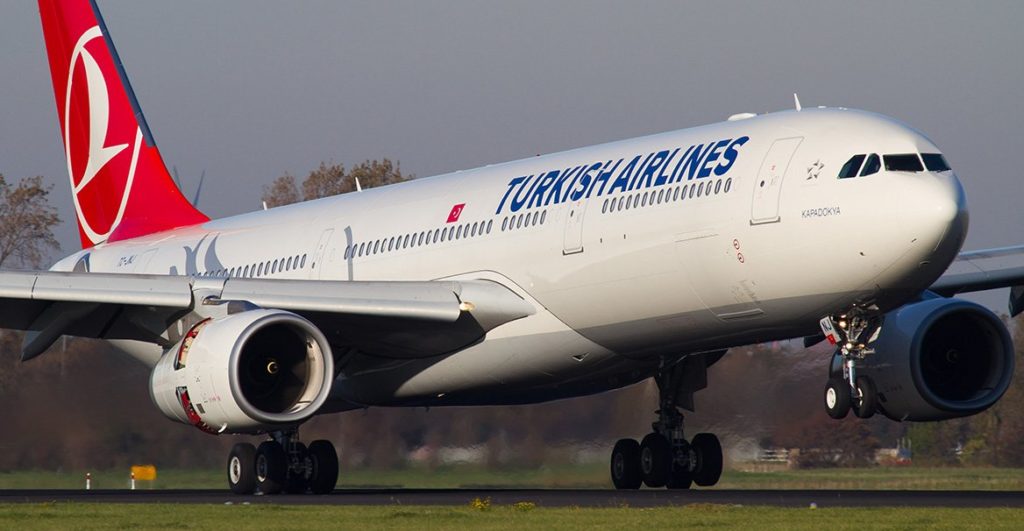 Turkish Airlines started as Turkey’s flag carrier before World War II. The airline, then called Türk Hava Yollari (THY), had a bad reputation until 1983 when a new government realized the airline would be the country’s ambassador to the world and modernized the airline. Turkish expanded internationally in the mid-1980s, and grew to more than 35 international destinations.

Gradually, the modern Turkish Airlines was built, with direct flights to the US starting in the mid-1990s. At the time, the domestic market was deregulated and carriers like Pegasus Airlines gradually gave Turkish hard competition for domestic travel.

The government privatized the airline from 2004 and a new entrepreneurial management started the growth of the modern Turkish Airlines. The expansion was focused on international traffic. Figure 1 shows the development of the world’s large airlines from 2002-2016.

The chart shows the strong market share development of Turkish, Emirates, Qatar and the Chinese airlines in ASK (Available Seat Kilometers), at the cost of the world’s legacy carriers. 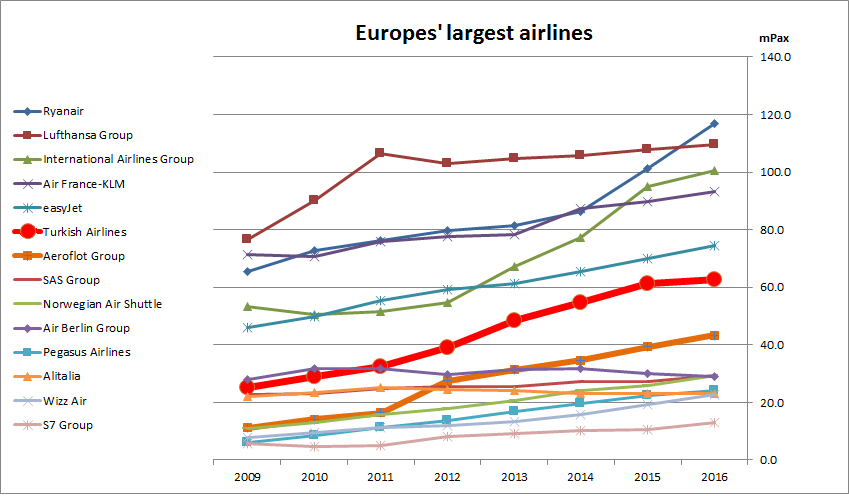 The development has been possible as Turkish has an advantageous geographical position, Figure 3. 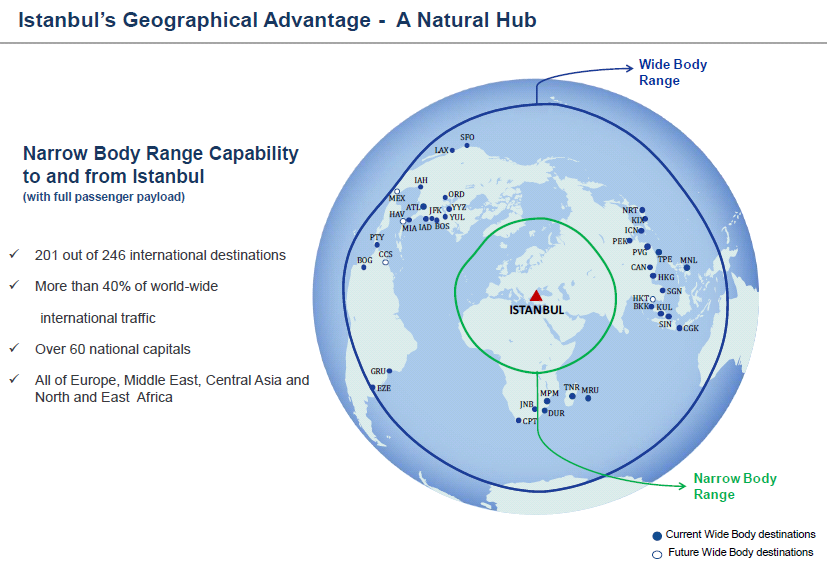 The Istanbul Atatürk Airport is ideally placed to connect Europe and North America to South-East Asia and Africa. The only continents which are not easily reached are Australia and the southern part of South America.

The Gulf carriers have an advantage towards Australia but US West coast is a stretch for these carriers. Not for Turkish.

One shall also note the good coverage with narrow body aircraft. Turkish use Boeing 737-800s in daughter airlines Anadolujet and SunExpress which cover international low cost destinations (the 737 has a longer range with standard fuel than the Airbus A320, which is Turkish standard aircraft for domestic and shorter international traffic).

Figure 4 shows Turkish network. The destinations are a mix of Domestic (49) and International destinations (246). 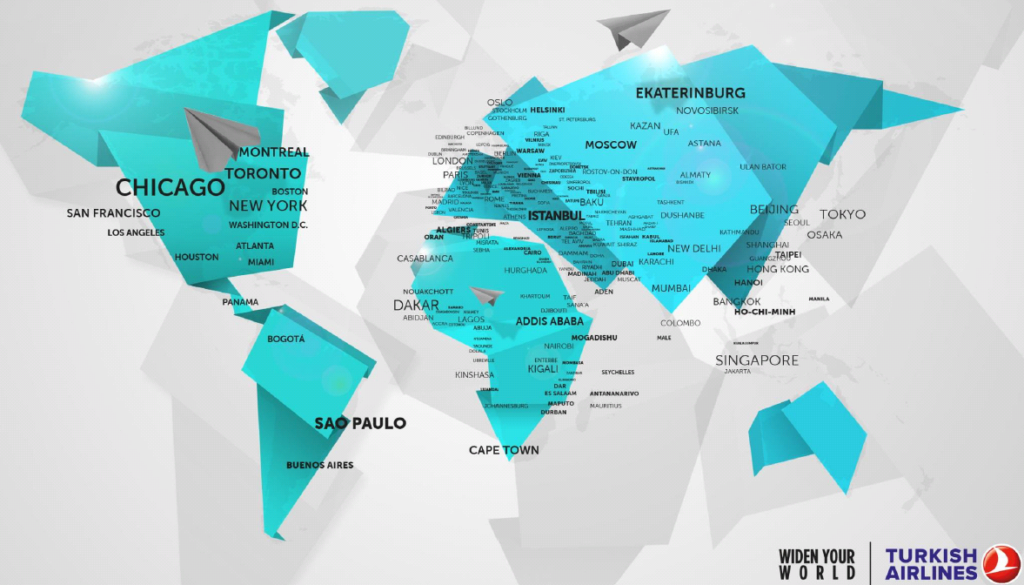 The list of destinations (Figure 5) is impressive. The network covers 119 countries. 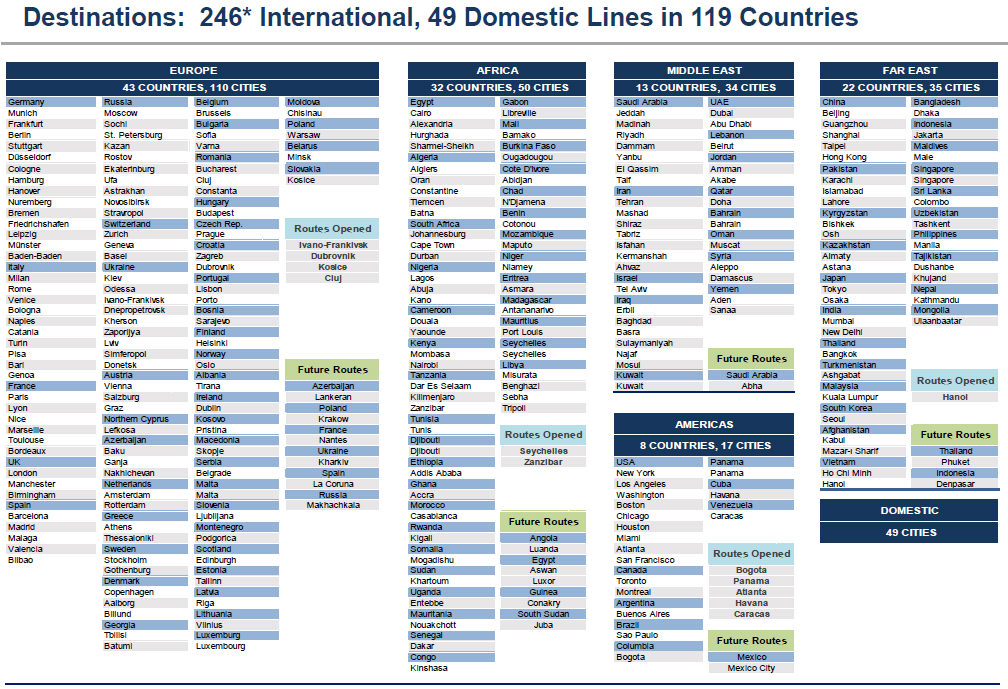 The vast network is served with a fleet of 324 aircraft, Figure 6. Main long-haul types are the Boeing 777-300ER and Airbus A330. Short haul is operated with the Airbus A320 for Turkish Airlines and Boeing 737 for international oriented daughters Anadolujet and SunExpress. 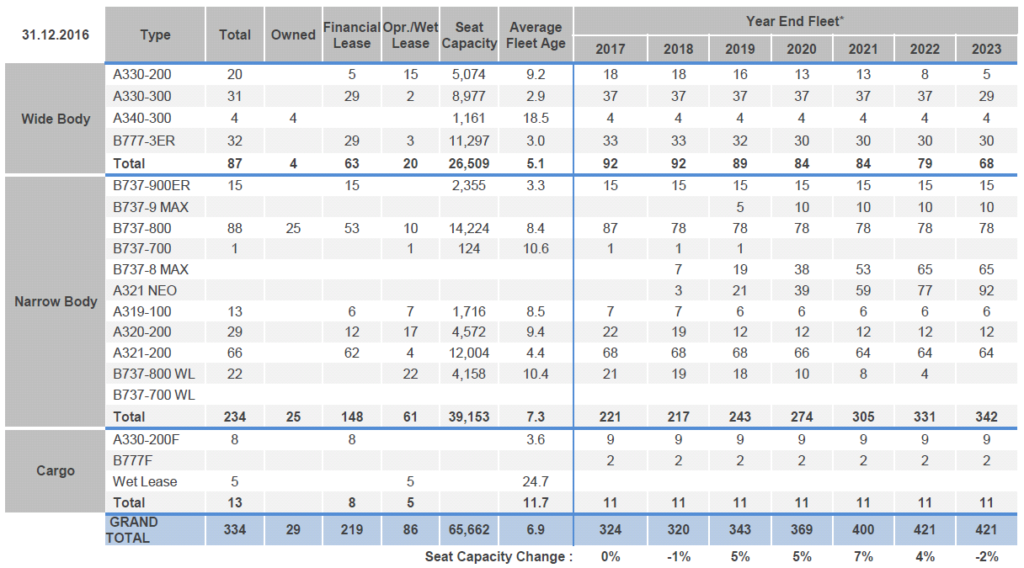 The fleet has grown quickly over the last years (Figure 7) to cater for the fast traffic growth. After the attempted state coup June 2016, the political unrest cut the international traffic and load factors suffered as the aircraft that arrived could not be filled. 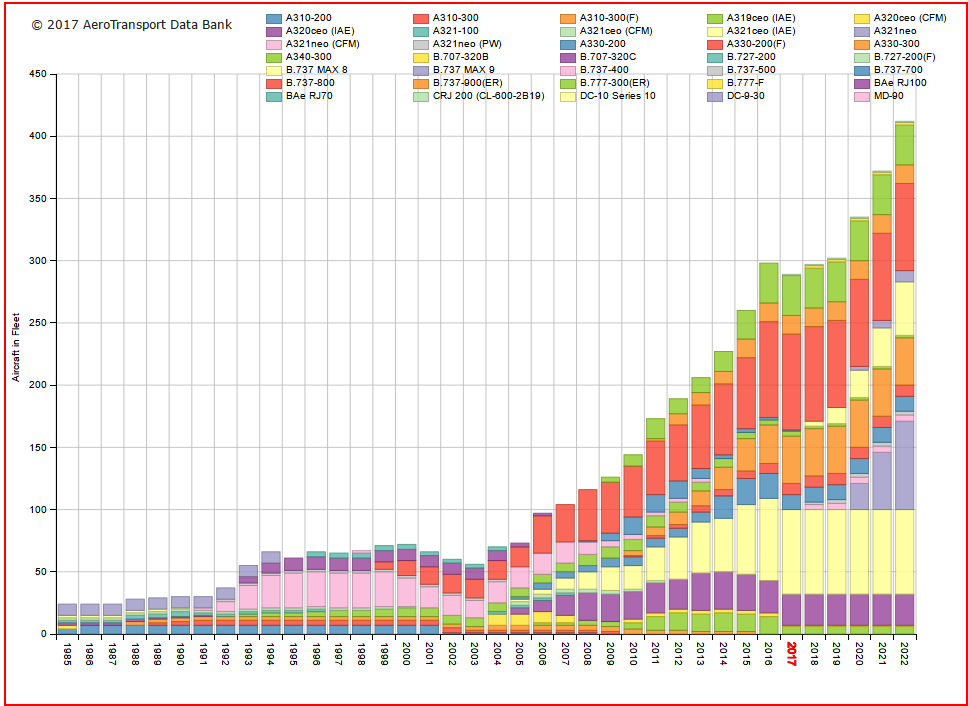 Figure 7. Turkish fleet over the years with planned growth. The graph’s aircraft bars are stacked in alphabetical order, with 777-300ER and 777-F on top 2017. Source: AeroTransport Data Bank.

The incoming aircraft paired with a sudden and sharp decline in traffic caused a decline in revenue without a decrease in costs, Figure 8. 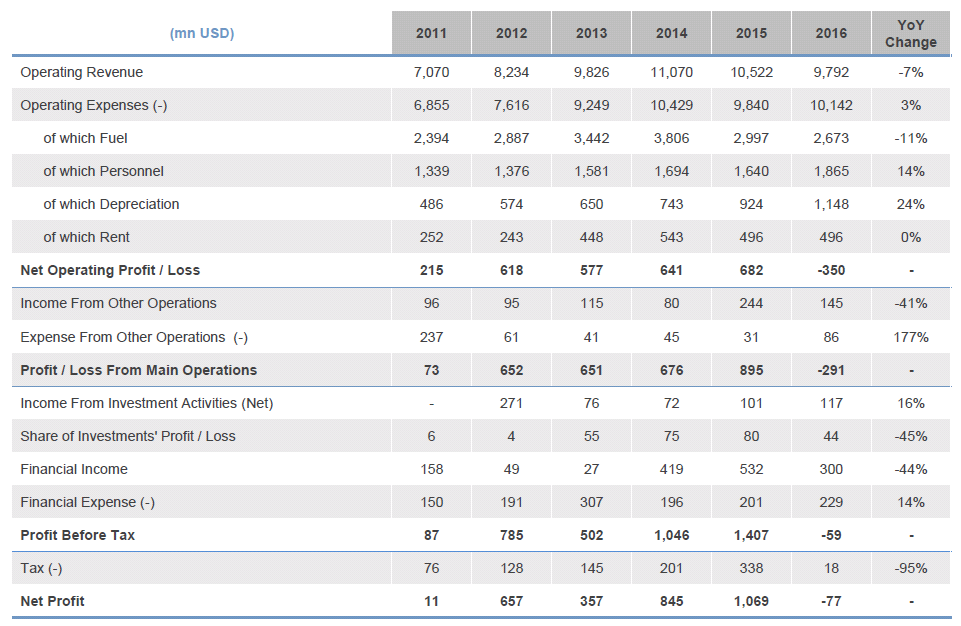 The profits of up to 10% of revenue in last year’s were possible with a large international network with load factors approaching 80%, Figure 9. 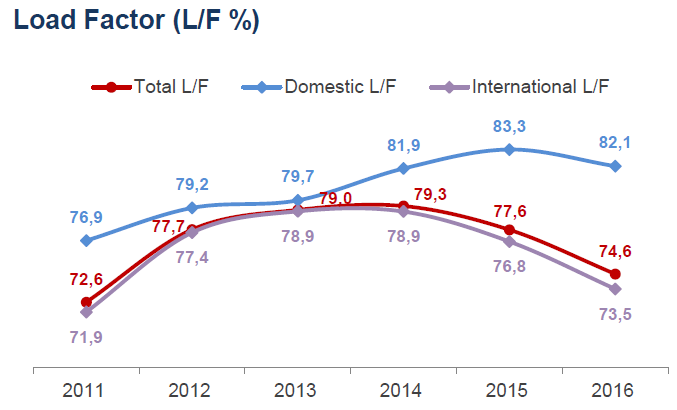 With up to 30-40 aircraft deliveries per year (Figure 7) that can’t be fully used due to a sudden drop in traffic, the only possible short term action is to lower the utilization, Figure 10.

Turkish is now working to rebuild confidence for its international customers. The good years built a strong balance sheet (Figure 9), so there is time to regain the impetus. 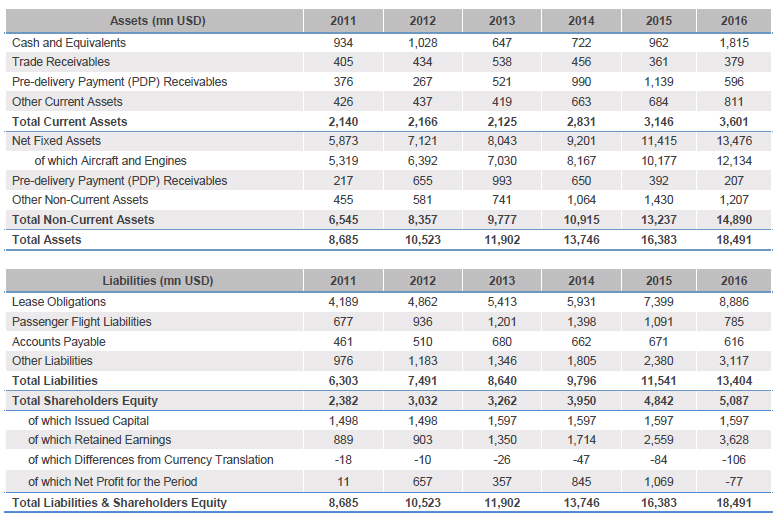 With a brake on incoming aircraft and an international load factor which has stabilized at 73% for 1Q2017, the period of bleeding should soon be over. This presumes the country settles down to business as usual.