While the number and the blue-chip customer are welcome for the launch of the program, it came at the expense of converting all of them from other MAXes previously ordered by UAL.

John Leahy, COO Customers of Airbus, was quick to dismiss the public relations momentum the United deal gave the MAX 10.

Speaking at an Airbus event in which Ethiopian Airlines announced a repeat order for 10 A350-900s, Leahy dissed the UAL deal and MOUs and orders announced Monday, in which 66 of the 168 deals announced were conversions. There now have been 166 of 309 orders and MOUs that are conversions from the MAX 8/9.

Leahy, at the Ethiopian event, said that Boeing “paying money” and converting orders wasn’t much of a program launch. Ironically, only a few hours after the Airbus event, Ethiopian and Boeing announced a 777F/MAX 8 set of orders.

But up-gauging orders is not at all uncommon at Boeing or Airbus. Whether Boeing “paid money” to persuade customers to switch from the MAX 8/9 may be hyperbole, but it hardly matters. Kick-starting the MAX 10 program is what counts, and with 309 orders and MOUs announced so far, Boeing already blew through the 240 figure company officials touted just yesterday and the top-end 300 orders some analysts thought would be the sales figure for the MAX 10.

It also compares favorably with the 500+ orders over the life of the 737-900/ER program and the estimated 410 orders for the MAX 9, prior to conversions.

Competing with the A321neo

At a product development briefing today, Mike Delaney, VP and GM of Airplane Development, pressed Boeing’s claim that the MAX 10 has a 5% economic advantage over the rival Airbus A321neo and that the MAX has more range. (Leahy dispute the claims, asserting some of his own that the A321neo has up to 10% better economics and flies 1,000 miles farther.) 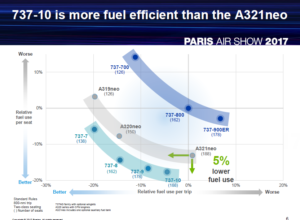 The only time the A321neo beats the MAX in range, Delaney said, was when it is equipped with three auxiliary fuel tanks.

So far, Airbus announced 122 new A321neo orders, still short of the new ones for the MAX 10. But there are two days left and Leahy is famous for having one last, big deal on the last day to win the orders race.