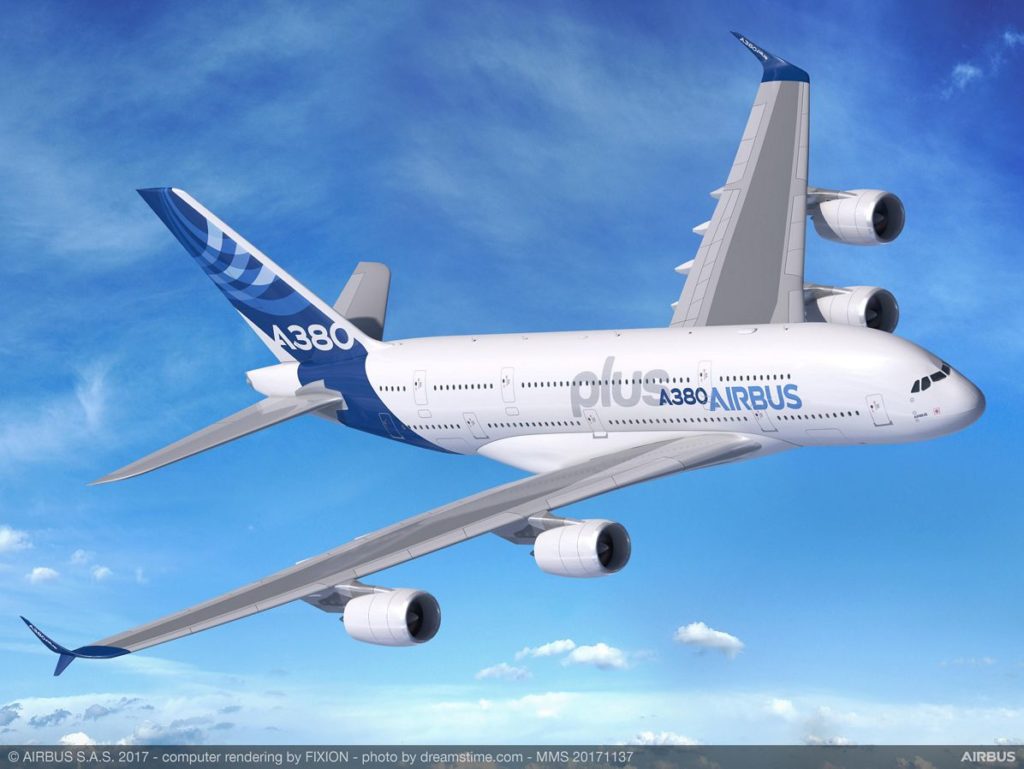 The A380Plus acronym packages several improvements to the A380 that has been discussed over the last year’s. It also introduces new enhancements.

The total suite of improvements are summarized in Figure 1. 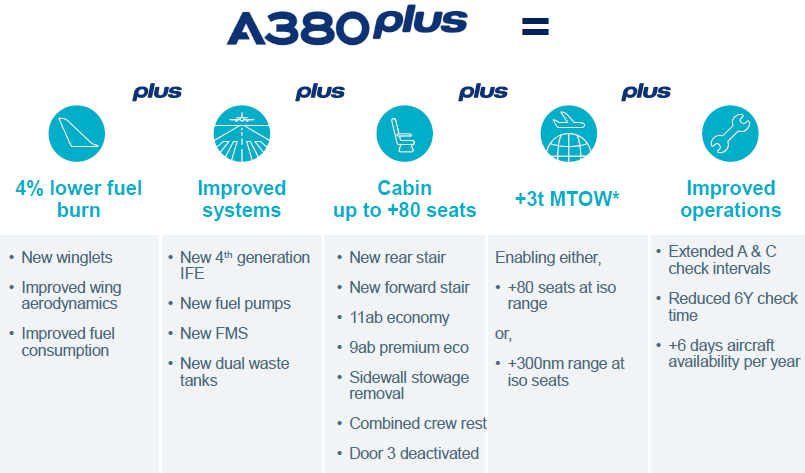 Figure 1. The improved areas in the A380Plus. Source: Airbus.

We will now go through these improvements one by one.

The A380Plus program introduces a more effecient wing than the original A380 wing. The A380 has a wing of advanced design aerodynamically. The wing profile and high lift arrangements are state of the art, but the 80m maximum width box forced a relatively low wingspan compared to the aircraft’s size and weight.

This gave the A380 wing an aspect ratio of 7.5, a low value (A350 has 9.5). The typical Airbus wing fences raised this to an effective aspect ratio of 7.8. The low effective wingspan means the aircraft flies with a high induced drag. The induced drag at mid-cruise weight is 20% higher than the parasitic drag. Normal would be that the drag values would be similar, which they are for the A350-1000.

What saves the aerodynamics of the A380 is the effective packaging of the passenger payload for the aircraft. The fuselage wetted area per seat is 20% lower than the A350-1000.

The A380Plus split winglet improves the effective aspect ratio of the wing to 8.4. It changes the pressure distribution of the wing outwards.

To regain an optimal total pressure distribution (which shall be close to elliptical for the whole wing) adjustments are necessary to the wing’s surfaces. The sections outboard of the engines are retwisted and there is a 30mm recamber of the wingarea between the engines, Figure 2.

Figure 2. Aerodynamics changes to the A380 wings. Source: Airbus.

The Plus package also advertises the engine improvements that have been made by Rolls-Royce and Engine Alliance over the last year’s. The Plus program  announces no specific new PIPs (Product Improvement Packages) for the engines.

In total, the aerodynamic changes enables a slightly higher Max Take-Off Weight (MTOW +3t) and improve the fuel consumption on long flights by four percent. The improvement allows the higher capacity A380Plus to fly 80 passengers the same range as the standard A380, or fly the same passenger payload 300nm further, Figure 3. 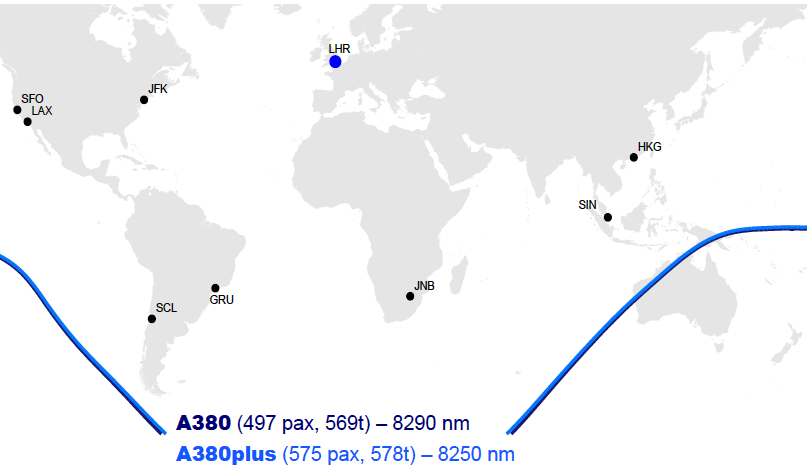 Figure 3. Payload range of original A380 with reference cabin vs. A380Plus. Source: Airbus.

Figure 4 details the cabin changes included in the Plus package. Many have been discussed before. 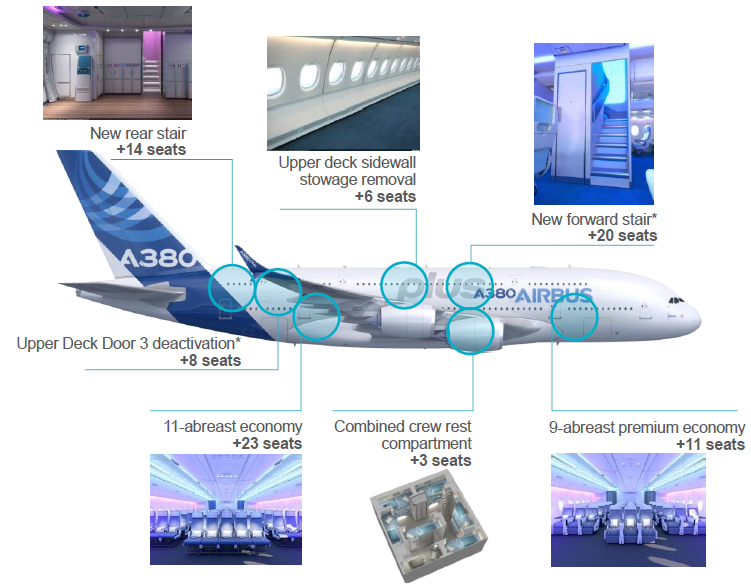 New is the forward stair being moved aft and combined with the descending stair to the combined Flight and Cabin crew rest compartment.

New is also the option to replace the no. three doors on upper deck with plugs, holding two windows. This gives the correct cabin ambiance to the one row of business or two rows of economy seats that can be added when no door escape areas are needed.

We have been given example cabin configurations that details the gains. Figure 5 shows a reference layout with 497 seats, which is close to the delivered average of 494 seats. 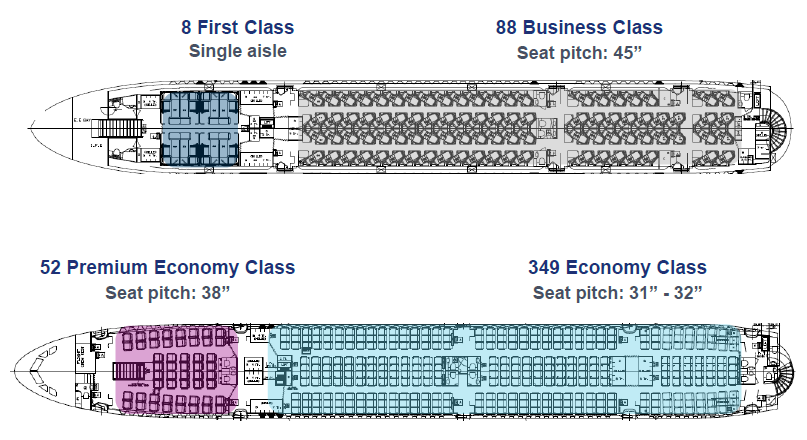 The cabin has the typical four classes, common in recent A380 deliveries. Figure 6 shows a cabin where the Plus improvements have been applied. The seat count increase is 78 seats. 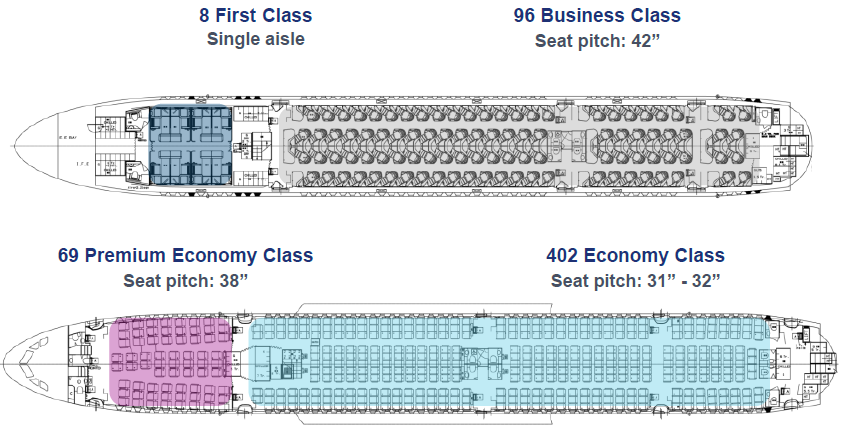 The option of blocking the third doors on the upper deck has not been used, but other enablers are in play. Example is the deletion of the upper sidewalls which allows reverse herringbone business seats at 42” pitch with equal bed lengths (seat angle is increased).

The Plus package introduces improvements that will increase dispatch reliability and decrease maintenance time. The present third generation IFE (In Flight Entertainment) system is replaced with a fourth-generation system which is lighter and more reliable.

The A380 fuel system is complex. Fuel is pumped to and from the horizontal tailplane to minimize cruise drag. The system has 13 fuel tanks and 41 fuel pumps. To improve the system’s reliability, the simpler and more reliable A350 fuel pumps replace the A380 pumps.

Finally, the software in the aircraft’s FMS (Flight Management System) allows the aircraft’s fuel efficiency to be individually tracked. This means each aircraft can be flown closer to its individual capacity, allowing higher payloads on long flights (flight planning is no longer dictated by worst individual).

The aerodynamic changes and other improvements will decrease the cost per seat of an A380Plus. In the next article, we will examine if the changes make the A380Plus competitive with the seat mile cost of its main competitor, Boeing’s 777-9.