Would a 767 stopgap make sense while waiting for NMA?

To understand how good a stopgap the 767-300ER would be for an airline needing to replace ageing 767s, and the Boeing 797 not being there in time, we check its economics versus the alternatives.

The 767-300ER versus Boeing’s and Airbus’ alternatives

We will assume the 767-300ER is offered and produced as is, with only avionics upgrades and Aviation Partners Boeing (APB) split winglets. Most 767-300ERs are operated on medium range flights such as US transcontinental routes.

We will, therefore, compare the aircraft with medium range two-class cabins with 60-inch spaced lie-flat business class seats, complemented with 31-inch economy seats. The 767 would then hold 20 Business seats at five abreast with 209 Economy at seven abreast, giving 229 seats.

We fly the aircraft over typical US transcontinental routes, Figure 1. 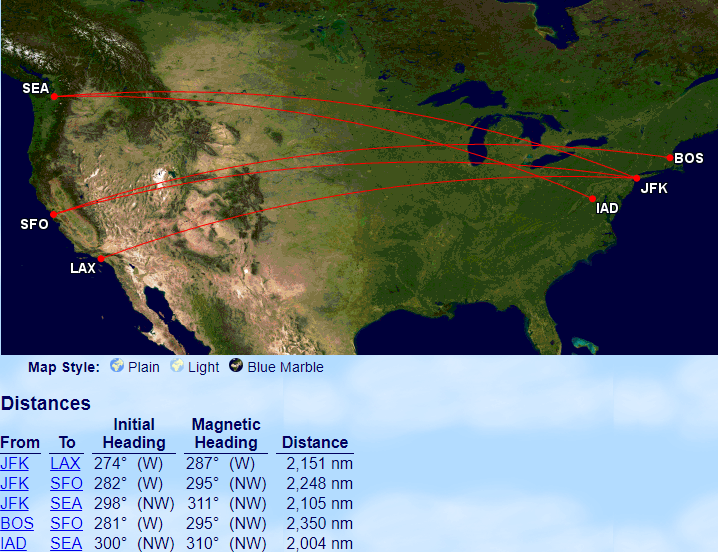 Going West, we shall calculate with 2,500nm as a reasonable average. We use our normal reserves of 5% enroute, 30 minutes circling and a 200nm alternate.

When we look at the other costs making up Cash Operating Costs (COC), we find:

The 5%-9% higher seat mile COC for the 767-300ER is not surprising. It has fewer seats to spread similar mission fuel costs and its lower crew and landing costs can’t compensate.

As described in the previous articles, a rebirth of the 767-300ER passenger version has many implications for Boeing. As a stopgap, until NMA/797 for airlines which operates 767 fleets today, it can make sense.

The Cash Operating Cost (COC) deficit of the 767 compared with its alternatives is 5%-10% with today’s low fuel prices. This can be compensated with low acquisition costs and aggressive pricing of the airframe’s maintenance costs.

The main consideration for Boeing will probably be, “how many defections to the Airbus A330 do we risk with and without a restarted 767 line, before we have the NMA/797 available?”

5 Comments on “Would a 767 stopgap make sense while waiting for NMA?”