Bombardier Belfast operations are about more than C Series wings

By Scott Hamilton  Jan. 29, 2018, © Leeham Co.: Belfast, Northern Ireland: These days, when mention of Bombardier’s production facility in Northern Ireland is mentioned, only one thought comes to mind: wings for the C Series. But the facility is more than one: wings for the C Series. Nacelles for the Pratt & Whitney Geared Turbo Fan engine for the Irkut MC-21 are also made in the same building. There are others, where fuselages and tail and wing components for the CRJ and multiple lines of business jets are also made. 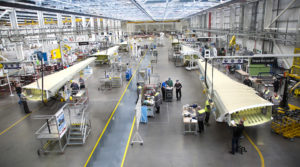 The legacy of the facility dates to 1908, when the Short Brothers began building airplanes, including six Wright Brothers Flyers constructed under license. It’s from the legacy of using composites on business jets and the CRJs that led to the C Series wings, using production methods that are more advanced than Airbus or Boeing.
Login