Jan. 7, 2019, © Leeham News: As the airline, lessor and aerospace industries await Boeing’s decision whether to launch its New Midrange Airplane (NMA, aka 797), as of last month the company still hadn’t closed the business case.

The aerospace analyst from JP Morgan met last month with Boeing’s top executives in Chicago. CEO Dennis Muilenburg and CFO Greg Smith told Seth Seifman that the business case must stand alone, on a program P&L basis, and not rely on aftermarket MRO services through Boeing Global Services. A Boeing spokesman last week reaffirmed the business case is still a work in progress.

As LNC has written many times, the business case involves the usual cost, pricing, production, supply chain and related issues.

But one overarching issue is how bid the market demand is. In large part, this drives everything else.

And market demand continues to be a matter of debate.

When the discussion was about a “757 replacement” and Airbus offered the A321neo LR, saying it saw a market for 1,000 aircraft, Boeing dismissed this as fantasy.

As the discussion shifted less from a 757 replacement to more like a 767 replacement, first identified in February 2015 by LNC, the first to recognize that the market had shifted, Boeing’s forecast began to shift publicly.

Meanwhile, LNC undertook its own study also sought out forecasts from lessors, the engine OEMs and suppliers. Almost universally the conclusions fell on around 2,300 aircraft.

How can there such a disparity and why is Boeing the outlier, with two sets of numbers?

To try and sort this out, it is necessary to revisit some history.

Boeing last week reaffirmed this definition, but today “above the 737” would, with a literal reading, include the 737-10. If Boeing means this literally, adjusting for the MAX 10, this narrows the market potential.

The 787-8 seats as few as 189 passengers in international multi-class configuration. In two-class, it seats 242 with a range of 7,355nm, according to Boeing’s website.

The Boeing MOM sector definition takes in a lot of space, both in terms of passengers and range. This is illustrated by the light green box in the chart.

The current NMA airplane is narrowly defined as 220-270 seats (two-class) with 4,500nm-5,000nm range. This is represented by the light blue box with red outline.

A Boeing-Aviation Week graphic shows this in a different way. 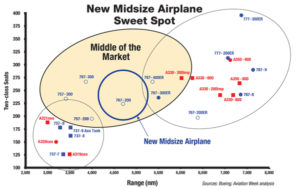 “We’re looking at an addressable market of between 4,000–5,000 airplanes and a distinct market that is above the 737 and below the 787,” a Boeing spokesman wrote LNC last week. “We stand by our forecast. And as you know, we haven’t made a launch decision on NMA yet. We are diligently working our business case, and we will make the decision when that is completed, while protecting our 2025 entry into service date.”

It seems counter-intuitive to include the A330s while excluding the 787s since these airplanes fundamentally perform the same mission.

A former Boeing employee has this observation.

“‘Addressable market’ is another term of the market-size that may overlap into the 737-9/10 and 787-8 sized demand (other OEMs included).

“This does not include profit and loss, which an airline would not pursue if the economics (including ownership) are a wash. In the end, the 20-year demand is roughly 2,500 units, or true market demand where we believed the aircraft could profitably serve and match demand,” he said.

By the time all these definitions are merged, it creates a confusing and complicated chart.

But it also may explain why Boeing’s forecast is so much greater—sometimes double—that of just about everyone else.

Everyone else is focused only on the NMA. This very narrowly defined aircraft, of course, can be used for much shorter routes—just as 787s, A330s and even 777s fly well below their capabilities.

Indeed, insiders say Boeing’s sales team is worried that the NMA will cannibalize the 787-8, something Boeing executives publicly deny. The sales team also worries that the 737-10, which won’t enter service until 2020, will be cannibalized.

“If the NMA kills the 737-9/10 and 787-8, then so be it,” the former Boeing employee says. “If the NMA significantly blocks Airbus dominating the so-called middle of the market, then Boeing will move forward and incentivize customers of the 737 and 788 to switch to the NMA.”