The future, for now, is MAX

Calhoun naturally said the focus right now is to get the MAX back in the air and delivered to customers. 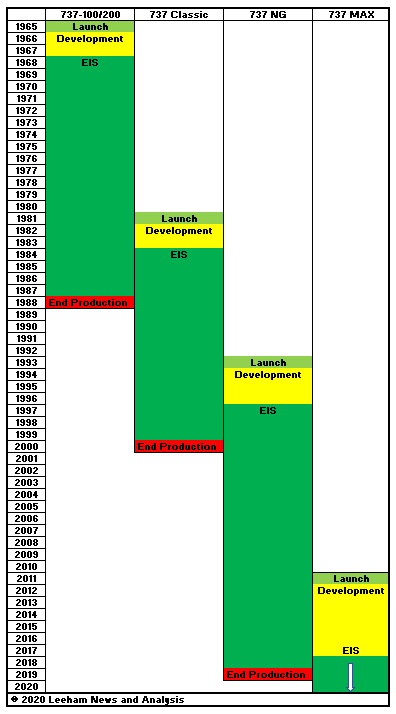 He sees the MAX around for at least a generation. Calhoun did not define the term, but in humanity, a generation typically is 20-25 years. With entry-into-service in 2017, 20 years will take this to 2037. This probably is the outside production period of the MAX.

“This airplane will compete well for another generation,” Calhoun said.

Calhoun said that the NMA study will be revisited in its entirety.

“That MMA project is going to be a new clean sheet of paper,” he said. “We’ve had couple of years now go by since the first clean sheet of paper was taken to it. Things have changed a bit. Not so much MAX related, but the competitive playing field is a little different.

“We have to plan for China. We’re going to take probably a different approach. We’re going to start with a clean sheet of paper again. I’m looking forward to that. I think that next airplane will be great,” he said.

It appears this new study will begin with a deep dive into revisiting Boeing’s philosophy of relying on the pilots as the ultimate in command, he said.

Airbus in the 1980s shifted its approach to more automation and more computer control. This is a practice that gained favor in the developing world where pilot training and skills may not be up to Western standards.

The Airbus philosophy has long been looked down upon by Boeing despite tiptoes into more automation on 7-Series airplanes.

Calhoun suggests there now may be a wholesale shift coming.

“We might have to start with the flight control philosophy before we actually get to the airplane. Because the decision around pilots flying airplanes, that’s a very important decision for the regulator and for us to get our head around,” he said. “As you well know, we have always favored airplanes that required more pilot flying than maybe our competitor did. We’re all going to have to get our head around exactly what we want out of that. That’ll be a process that will go on alongside of the next airplane development.”

There is a future new airplane

Although Calhoun put the NMA on hold, he said he’s not running from research programs; these will be sustained, but they may be reprioritized.

“We’re not ripping them apart, we’re not giving up on the future,” he said.

“There are definitely investments we can make to support the engineering function and the disciplines attached to it,” Calhoun said. “I know what those are. I’m not going to describe them externally until I get them firmly rooted internally, but we will do that.”

The timing won’t be driven by the future of the MAX, but it may be influenced by it.

“I am guessing and projecting the MAX will hold its own,” Calhoun said. “The market split that existing prior to MCAS will restore itself. That will give us a lot of freedom on that next airplane. If that share position didn’t restore itself, of course it would have an impact.”

155 Comments on “Pontifications: Back to drawing board on NMA, Boeing’s CEO says”